I know that we did the right thing because I saw the sign of Christ in her hands. She was bearing stigmata and that was a sign from God that we should exorcise the demons. She died to save other lost souls, to atone for their sins.

When did Anneliese begin to experience strange symptoms?

Epilepsy may have been the cause of Anneliese Michel's demonic hallucinations.
In 1968, when she was 17 and still in high school, Anneliese began to suffer from convulsions. Court findings have her experiencing her first epileptic attack in 1969. It was then that a neurologist at the Psychiatric Clinic Wurzburg diagnosed her with Grand Mal epilepsy. Soon, Anneliese started experiencing devilish hallucinations while praying. She also began to hear voices, which told her that she was damned. The court determined that by 1973 Anneliese was suffering from depression and considering suicide. In 1975, convinced that she was possessed, her parents gave up on the doctors from the psychiatric clinic. They chose to rely solely on the exorcisms for healing (washingtonpost.com). Anneliese's symptoms have since been compared with those of schizophrenia, and they may have responded to treatment (telegraph.co.uk).

Who first diagnosed Anneliese as being possessed?The first unofficial diagnosis was made by an older woman who accompanied Anneliese on a pilgrimage. She noticed that Anneliese avoided walking past a particular image of Jesus, and that she refused to drink water from a holy spring. The woman also claimed that Anneliese smelled hellishly bad (washingtonpost.com). An exorcist from a nearby town examined Anneliese and concluded that she was demonically possessed. After two failed requests, the rite of exorcism was finally granted by the Bishop.

Was Tom Wilkinson's character of Father Moore based on a real person?

Did Anneliese Michel really see the faces of demons on the people around her like Emily Rose did in the film?

According to The Washington Post, as she grew more convinced that she was possessed, Anneliese began to see the faces of demons on the people and things around her.

Watch a Clip from the Film

Anneliese was convinced that she had been possessed by several demons, including Lucifer, Judas Iscariot, Nero, Cain, Hitler, and Fleischmann, a disgraced Frankish Priest from the 16th century. She also mentioned a few other damned souls who had manifested themselves through her. -moviesonline.ca

Goodman's book includes Anneliese Michel exorcism photos and transcripts. Due to a revived interest following the movie, the book has been republished. This is an opportunity to purchase it while it's still in print.


Did Anneliese's mother Anna support the making of the film?

No. Anneliese's mother did not support the making of The Exorcism of Emily Rose. "I don't want to see the film and I don't know anything about it," Mrs. Michel said, who was at the time in her eighties. Anneliese's father, Josef, died six years prior to the film's release. -telegraph.co.uk

How many people were found guilty in Anneliese Michel's death?

Is it possible that Anneliese was copying what she had seen in William Friedkin's 1973 film The Exorcist?

A possible influence.
Director William Friedkin's film The Exorcist was released in Germany in 1974, two years prior to the audio tapings of the exorcisms in which we hear Anneliese's recorded voice (listen below). Even though her voice is quite chilling, it bares a striking resemblance to the growling, barking, and inhuman voice of Linda Blair from Friedkin's film. This has caused some people to conclude that Anneliese was simply mimicking what she had seen in the film, if she had in fact seen the film. Upon its release in Germany, the movie created a sort of paranormal hysteria that swept the nation. European Psychiatrists reported an increase of obsessive ideas among their patients (moviesonline.ca). The movie however, does not provide explanation for the years prior to 1974, in which she was experiencing numerous other afflictions that she and those close to her had attributed to demonic possession.

What other disturbing things did Anneliese do?

Anneliese carried out a number of highly disturbing actions. She licked her own urine off the floor. She ate flies, spiders and coal. She bit off the head of a dead bird. In one instance, she crawled under a table and barked like a dog for two days. She could often be heard screaming through the walls for hours. Tearing off her clothes and urinating on the floor became a regular occurrence. -moviesonline.ca

Did the exorcisms cause her bodily harm?

The exorcisms took a significant toll on Anneliese's body.
Yes. Anneliese (pictured right) endured 67 rites of exorcism over a period of 10 months. Over time, the ligaments in her knees ruptured due to the 600 genuflections that she performed obsessively during each exorcism session. A genuflection is an act of reverence consisting of falling onto one or both knees (called a "double genuflection"). On June 30, 1976, during her last rite of exorcism before her death, too weak and emaciated to perform the genuflections on her own, Anneliese's parents stood and helped carry her through the motions. -moviesonline.ca

Was there a doctor present during the exorcisms as in the film? 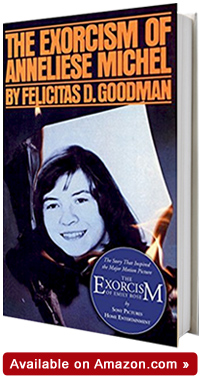 Goodman based her book on court records and eye-witness accounts.
No. Around Easter time of the year that she died, Anneliese began to refuse food and drink. Her convulsions returned with a greater ferocity. No doctors were called (time-proxy.yaga.com). During the trial, specialists claimed that if the four accused (Father Arnold Renz, Pastor Ernst Alt, and the parents) would have begun to force feed Anneliese a week before her death, then she would still be alive. One of Anneliese's sisters explained to the court during the 1978 trial that Anneliese did not want to go to a mental hospital where she would be drugged and forced to eat (moviesonline.ca).

In her book, The Exorcism of Anneliese Michel, Felicitas D. Goodman embraces the possibility that Anneliese was not epileptic, and that the medication the doctors had given her to control her seizures only made her hallucinations worse.

Why did Anneliese Michel refuse to eat?

She forced herself to fast because she believed that it would rid her of Satan's influence. At the time of her death, she weighed only 68 lbs (telegraph.co.uk). Prior to her death, she had spoke of dying to atone for the sins of the wayward youth and apostate priests of the modern church (washingtonpost.com). Anneliese is pictured on the right.

What did Anneliese technically die from?

Anneliese's gravesite in Klingenberg Cemetery, Germany.
According to the autopsy, on July 1, 1976 Anneliese Michel succumbed to the effects of severe dehydration and malnourishment. At the time of her death, she was also suffering from Pneumonia and a high fever (1g3.com). She was buried next to her illegitimate sister Martha at the outer edges of the cemetery (view here). This area is normally reserved for illegitimate children and suicides (telegraph.co.uk).

What were Anneliese Michel's last words?

Weak and on the verge of death, she spoke her last known words on the day before she died. She told her exorcists "Beg for Absolution". To her mother Anna, she said, "Mother, I'm afraid." -moviesonline.ca

Had Anneliese been a deeply religious person prior to 'being possessed'?

Yes. Anneliese and her three sisters were raised in a strict Catholic family. Her father Josef had considered training as a priest and three of her aunts were nuns.

As she grew older, Anneliese continued to suffer for the sins of others. When she was a teenager, Anneliese slept on a bare stone floor to atone for the sins of wayward priests and drug addicts, who could be observed sleeping on the hard ground at the local train station (washingtonpost.com). In college at West Germany's University of Würzburg, she hung pictures of saints on her dorm room walls, kept a holy-water font near the door, and regularly prayed the Rosary (time-proxy.yaga.com). As stated earlier, even close to her death she spoke of dying to atone for the sins of the wayward youth and renegade priests.

Is it possible that the priests who performed the exorcisms provided Anneliese with the contents of her psychotic behavior?

"Doctrinaire Induction" theorizes that it was the exorcists who provided Anneliese with the basis for her demonic behavior.
Some experts believe that this is possible. Psychiatrists who testified during the trial spoke about the "Doctrinaire Induction", which in relation to Anneliese explains that she accepted her behavior as a form of demonic possession, mainly because the exorcists introduced much of the idea to her and reinforced it with each exorcism (moviesonline.ca). In 1984, German bishops and theologians petitioned Rome to change the exorcism rite. They concluded that speaking directly or "imperatively" to the Devil, that is, "I command thee, unclean spirit . . . " only confirms to the patient that they are without a doubt possessed (moviesonline.ca).

In the film, did the director try to provide an answer as to whether or not she was truly possessed?No. In an interview, Scott Derrickson responded to this question by saying, "We tried to put at the center of the movie the question of why did she die, and what is the truth behind this phenomenon? And ultimately to not answer it." Screenwriter Paul Harris Boardman went on to explain, "We have a Scully-Mulder approach to this material, with me being a little more the skeptic and Scott the believer. We approach it and try to be very fair and even-handed to both points of view, to our points of view. That's how we approach it analytically." -hollywoodgothique.bravejournal.com

I read that the body of Anneliese Michel was exhumed after her death, is this true?

Yes. On February 25, 1978, almost two years after her death, the deceased body of Anneliese Michel was dug up and moved to a new oak-coffin lined with tin. Her parents' desire to move her from the cheap coffin in which she was buried was allegedly used as an excuse to exhume her body. Instead, they were acting on a message received from a Carmelite nun from the district of Allgaeu in southern Bavaria. The nun had told the parents that she had a vision that their daughter's body was still intact. Official reports state that the body showed consistent deterioration. Photos of the exhumed body were never released, and Anneliese's parents were prohibited from witnessing the exhumation. From a distance, they could however see her grave from the bedroom of their home, where her mother still lives today. -wikipedia.org

Is it true that another movie was made about the exorcism of Anneliese Michel?

Yes. A German language film about Anneliese Michel called Requiem, directed by Hans-Christian Schmid, was released in 2006. It is much more a drama than a horror film, and it supposedly follows the real story of Anneliese Michel more closely. -imdb.com


Listen to the Voice of Anneliese Michel:

At the time of the release of The Exorcism of Emily Rose, a German web site posted audio in which we hear the real Anneliese Michel's voice during one of the exorcisms. The web site obtained the audio from one of the 43 taped recordings made during the 67 rites of exorcism that Anneliese endured for a period of 10 months. The commentators in the clips can be heard talking about the demons Cain, Nero, and Hitler, who Anneliese believed had taken over her body.

View the movie's trailer in addition to the trailer for Requiem, the non-horror German film about Anneliese.

The Exorcism of Anneliese Michel
by Felicitas D. Goodman

The Exorcism of Emily Rose

Hostage to the Devil
by Malachi Martin