Starring Jessica Biel, Jonathan Tucker, Andrew Bryniarski | based on director Tobe Hooper's 1974 film of the same name
Tweet
*Note: REEL FACES content below is slightly graphic in nature as the real individual is separated from the movie's fictional elements. Reader discretion is advised.

How much of The Texas Chainsaw Massacre is based on the real life murderer Ed Gein? 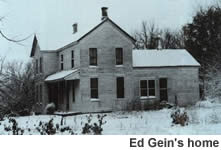 Despite being heavily touted as "inspired by a true story," both Tobe Hooper's original 1974 film and the 2003 Marcus Nispel remake are only lightly based on the real-life murderer Ed Gein, who is suspected to have taken several victims between 1954 and 1957. Perhaps the most recognizable similarity is the film's house, whose gruesome content was similar to that found in Ed Gein's home (above right) in 1957.

Did the real Ed Gein use a chainsaw to kill his victims? 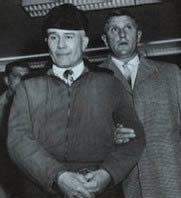 No, both of Ed Gein's identified victims, Mary Hogan and Bernice Worden, were shot with a pistol. In November of 1957, police found Bernice Worden hanging from the rafters in a shed behind Gein's house. Her body had been gutted like that of a deer, and the head had been removed. Ed Gein was also the suspect in several other missing persons. The element of the chainsaw that was added for the film's story once again emphasizes the loose connection of the film to Gein. -carpenoctem.tv

Who exactly was Ed Gein and why did he commit such atrocities?

Eddie Gein was the son of Augusta and George Gein. Augusta was a deeply religious woman, who preached the Bible to Eddie and his brother Henry on a daily basis. She warned them about the dangers of loose women, in an effort to keep them from being cast down to hell. She was a strict, hard woman, who never wavered from her own beliefs, which she ingrained into the family. Eddie's father, George, was an alcoholic, and Augusta viewed him as being worthless. She began a grocery business in La Crosse, Wisconsin, and when she had saved enough money she moved the family away from the sin of the city to a farm in Plainfield, Wisconsin. Eddie grew up shy and was ignored by the other kids at school, who saw him as quiet and feminine. If he did try to make friends, his mother scolded him. As a result, Eddie turned inward and began to reside in the dark corners of his mind.

He worshipped his mother and grew upset when his brother Henry criticized her. On May 16, 1944, while fighting a brush fire near the farm, Eddie and Henry split up and went in different directions. After the fire had been extinguished, Eddie grew concerned because his brother had not returned. When police arrived Eddie lead them directly to his "missing" brother Henry, who was lying dead in an area untouched by the fire with bruises on his head. The shy and seemingly harmless Eddie was quickly dismissed as a suspect, and the coroner listed asphyxiation as the cause of death. -crimelibrary.com

Were any other films based on Ed Gein?

Both Norman Bates from Alfred Hitchcock's Psycho (1960) and Buffalo Bill from The Silence of the Lambs (1991) were also loosely based on Ed Gein:

· Psycho (1960):
Norman Bates, the main character in Alfred Hitchcock's masterpiece, was loosely based on Ed Gein. Hitchcock had adapted Psycho from a story by author Robert Bloch, who had modeled the character of Norman Bates after Ed Gein. The main similarities include the feminine qualities of both Norman Bates and Ed Gein, as well as both individuals' attachments to their domineering mothers.

· The Silence of the Lambs (1991):
The movie famed killer from The Silence of the Lambs, Buffalo Bill, perhaps most closely resembles Ed Gein. Buffalo Bill as well desired to be a woman, and he displayed actions that could categorize him as a transvestite. They both skinned their victims and enjoyed parading around in garments of flesh. They both also preyed on women. However, Buffalo Bill chose somewhat younger women for his victims than Ed Gein did.

Of course there have been spin-offs, including 1988's Hollywood Chainsaw Hookers (right), which is about a private eye named Jack Chandler who stumbles upon a cult of chainsaw wielding prostitutes in his search for Samantha the runaway. The biggest star of this B-movie is the original Leatherface himself, Gunner Hansen. He plays the master of the women, who serve him the fresh limbs of their victims. Oh, and what's the tagline for Hollywood Chainsaw Hookers? "They charge an arm and a leg."


Opening Narrative of the 1974 film, The Texas Chainsaw Massacre:

LISTEN to the Monologue (video) 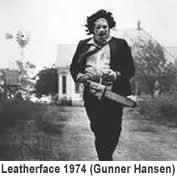 "The film which you are about to see is an account of the tragedy that befell a group of five youths, in particular Sally Hardesty and her invalid brother, Franklin. It is all the more tragic in that they were young. But, had they lived very, very long lives, they could not have expected nor would they have wished to see as much of the mad and macabre as they were to see that day. For them an idyllic summer afternoon drive became a nightmare.

The Events of that day were to lead to the discovery of one of the most bizarre crimes in the annals of American history. The Texas Chainsaw Massacre." - August 18th, 1973

View the movie preview for the film.

The Texas Chainsaw Massacre: The Next Generation (1995)