Audiences first met Dr. Henry "Indiana" Jones, Jr. in 1981's Raiders of the Lost Ark, directed by Steven Spielberg. Indiana Jones' leather jacket, trademark Fedora hat, and trusty bull whip helped to create the unique persona of the character, who was played by actor Harrison Ford. Here, we celebrate the legendary professor, adventurer, and cultural icon with a gallery of handpicked Indiana Jones t-shirts. The tees include the Raiders of the Lost Ark Indiana Jones t-shirt, the Temple of Doom tee, and the Indiana Jones IV Kingdom of the Crystal Skull t-shirt. Look below for more great Indiana Jones merchandise and movie gear, including hats, bull whips, authentic jackets and Indiana Jones costumes.
To buy a T-Shirt, click the image or link for store and size information. 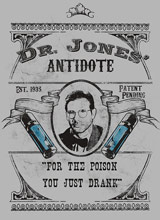 This funny, bestselling Indiana Jones and the Temple of Doom shirt features one of the most memorable quotes from the franchise. After Dr. Jones drinks his martini, Lao Che hands him an antidote. When Indy asks what it's for, Lao Che replies, "For the poison you just drank." Indy then scrambles to get the vial, which goes rolling across the floor. The tee's design displays two antidote vials along with the movie quote. If he didn't find the antidote, there would be no Indiana Jones and the Kingdom of the Crystal Skull. Link to: Indiana Jones' Antidote 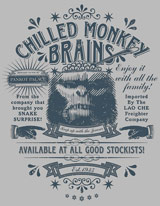 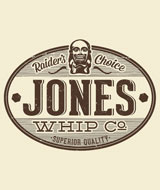 The front of this cool Indiana Jones tee displays a logo for the Jones Whip Co., makers of superior quality raiders choice whips. For Indy (Harrison Ford), going into the whip making business was a natural fit. Whether he's using his whip to disarm an enemy in Raiders of the Lost Ark or unleashing it to help swing over a gap, Indy fans can celebrate his unique skill with one of these Indiana Jones t-shirts. Wear it during your search for rare Indiana Jones action figures and toys. Link to: Jones Whip Co. 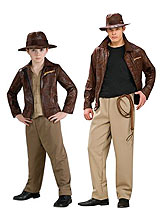 Relive the adventure with one of these timeless Indiana Jones costumes. Styles include the rugged leather jacket look or the more casual khaki button-up. You can even combine the costume with an Indy tee, including the Raiders of the Lost Ark Indiana Jones t-shirt that displays the popular Raiders of the Lost Ark movie poster art. Most fans know that Tom Selleck was originally cast to play Indy. However, due to his contractual commitment to Magnum, P.I. (CBS), he was forced to turn down the role. Steven Spielberg again suggested Harrison Ford and producer George Lucas finally agreed. Link to: Indiana Jones Costumes 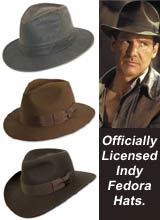 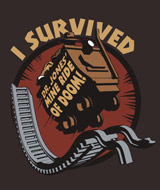 This Indy tee is a tribute to the amusement park like mine cart chase scene from the Temple of Doom. The scene concludes with Indiana Jones (Harrison Ford), Willie Scott (Kate Capshaw) and Short Round (Jonathan Ke Quan) fleeing from the cart as a torrent of water floods the mine. Wear this Indiana Jones shirt to your favorite amusement park. Just be careful of mine themed rides that involve a rickety old cart and water. Pair this with an Indiana Jones IV merchandise item for a timeless, adventure-filled gift. Link to: Dr. Jones' Mine Ride of Doom 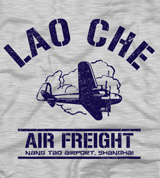 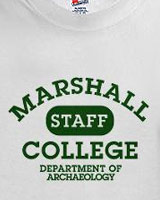 This Marshall College Kingdom of the Crystal Skull Indiana Jones t-shirt promotes the school where Jones worked as a professor in the Crystal Skull movie. The college was named after producer Frank Marshall, who often collaborated with director Spielberg. Wear the tee it as you recite Indiana Jones quotes like, "Don't call me Junior." Indy (Harrison Ford) says this to his father, Dr. Henry Jones Sr. (Sean Connery), after his father calls him Junior. Pair it with a Raiders of the Lost Ark tee or an Indiana Jones IV action figure. Link to: Marshall College Indy 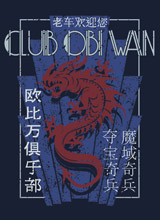 The Temple of Doom opens with Indy in a Shanghai nightclub named Club Obi-Wan, attempting to trade the remains of Nurhaci for a large diamond with a gangster named Lao Che. This unique Indiana Jones tee displays a logo for Club Obi Wan, Lao Che's popular Shanghai hot spot. The club's name is an obvious reference by Star Wars writer George Lucas to the famous Jedi character. Wear this piece of Indy merchandise underneath your Indiana Jones leather jacket. The shirt is a must have for die hard fans of the movies. Link to: Club Obi Wan Indiana Jones 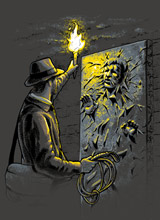 This brilliant mind-bending design depicts Indiana Jones making the ultimate discovery, Han Solo frozen in carbonite! It brings together two legendary franchises, Indiana Jones and Star Wars, both featuring Harrison Ford. Wear it with your Indiana Jones Fedora hat or pair it with one of the Last Crusade t-shirts for an adventurous gift. We recommend donning it for an evening at Pankot Palace eating Chilled Monkey Brains for dessert. Indiana is a guest at the palace in The Temple of Doom, and he discovers a vast underground temple beneath Pankot Palace, where children have been enslaved to dig for the precious Sankara stones. Link to: Starcheology 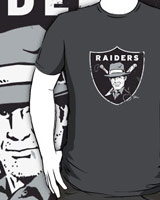 Raiders of the Lost Ark t-shirt 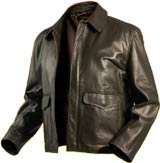 If you're going to wear something over your favorite Crystal Skull Indiana Jones t-shirt, there's nothing better than an Indiana Jones Jacket. Peter Botwright designed the original Indy jacket, and his company, Wested Leather, continues to make authentic replicas in an array of sizes. If you want to go authentic, make sure it was made by Wested when purchasing. Wear one with your Indiana Jones hat for a highly realistic looking Indiana Jones costume. Link to: Indiana Jones Leather Jackets