The original Star Trek television series, created by Gene Roddenberry, introduced viewers to space travel, the Starship Enterprise, Vulcans, phasers and Captain Kirk. The original episodes helped give birth to multiple spin-offs, including The Next Generation, Deep Space Nine, Voyager, Star Trek: Enterprise, an animated series and 11 movies. Using warp drive and our communicators, we scoured the universe to find the best Star Trek clothing available. Browse the selection of Star Trek XI t-shirts, outfit yourself in an original Star Trek uniform t-shirt, or live long and prosper in a Vulcan Spock shirt. Props and costumes are also showcased.
To buy a T-Shirt, click the image or link for store and size information. 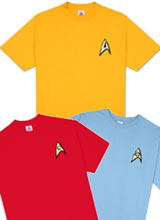 Gold (command and helm), red (engineering and security) or blue (science and medical), these Star Trek uniform t-shirts mean something to all fans. Regardless of which Star Trek movie, television series, or crew member is your favorite, this recognizable shirt is a classic addition to your clothing collection. Imitation is the sincerest form of flattery, so dress up as your favorite Star Trek character (or as all of them) any day of the week. If you aren't a Trekkie...yet... and are buying the perfect gift for a friend, just remember Captain Kirk wears gold, Spock wears blue and Scotty wears red. Link to: Star Trek Uniform 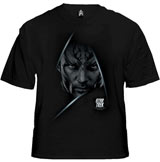 Be the first to have an official Star Trek XI t-shirt. This much anticipated Star Trek movie is number 11 in the blockbuster franchise. This classic black t-shirt has character options including Kirk (Chris Pine), Spock (Zachary Quinto), Uhura (Zoe Saldana), Romulan villain Nero (Eric Bana) and more. Impress fellow Trekkies with Star Trek XI tees. They are out of this world! Link to: Star Trek XI 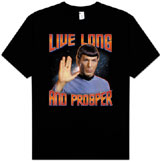 Live long and prosper with this Star Trek Spock t shirt that displays the character portrayed by Leonard Nimoy on the front. Spock is performing the famous Vulcan salute. Nimoy came up with the idea for the salute himself, which often tested the manual dexterity of the other actors on the set. Some actors reportedly had to arrange their fingers off-screen before bringing their hand into frame. Link to: Live Long and Prosper Spock 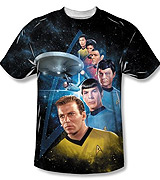 After having seen all Star Trek episodes and movies, is the original crew still your favorite? Then this tee is for you. This Star Trek t-shirt features crew members from the Star Trek original series that aired from 1966 to 1969. William Shatner, Leonard Nimoy, DeForest Kelley and the rest of the gang indisputably made this franchise what it is today. Purchase it with a classic Star Trek uniform shirt. Link to: Star Trek Classic Crew 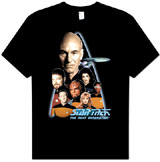 Star Trek The Next Generation t-shirt

Do you think Star Trek The Next Generation blew all the others out of space? You wouldn't be the only one. This 18 Emmy Award winning series has a loyal fan base that believes Captain Kirk has nothing on Captain Picard. This t-shirt features Patrick Stewart, Jonathan Frakes, LeVar Burton and the rest of the award winning ensemble. It deserves a place in every Star Trek fan's clothing collection. Link to: Star Trek The Next Generation 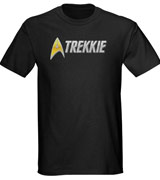 Are you a Trekkie? Is someone you know a Trekkie? Don't know what a Trekkie is? A Trekkie is a Star Trek fan that loves basically anything and everything Star Trek related. Many, but not all, of these fans are a part of Star Trek fan clubs and dress up in original crew member uniforms for conventions. Be proud and announce it to the world (and other worlds) with this super simple Trekkie t-shirt with classic Star Trek style lettering. Link to: Trekkie 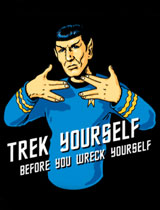 This Trek Yourself t-shirt featuring an animated style Spock will stand out in any crowd. While many fans have inadvertently overlooked the animated series which aired from 1973 to 1974, it is a vital part of Star Trek history. Animation allowed creators to design more detailed exotic worlds that were transformed into movies. This Trek Yourself Before You Wreck Yourself tee features Captain Kirk's U.S.S. Enterprise science officer Mr. Spock. Order this funny tee with a modern Star Trek XI t-shirt for the perfect sci-fi combination. Link to: Trek Yourself 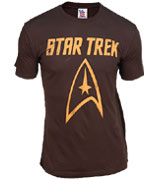 Not sure which Star Trek cast, crew member, series or movie is your favorite? You are in luck, you don't have to be sure. Just because you are a fan does not mean that you have to pick favorites; they all deserve a round of applause. This basic t-shirt comes in a variety of colors. The Star Trek logo is front and center in gold, making it an absolute eye catcher. Your love of this sci-fi series, including the Star Trek 11 movie, will shine through with this tee. Link to: Star Trek Gold Logo 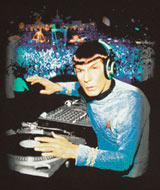 Mister Spock might seem a little uptight at times, but he still knows how to have a good time. This eye catching shirt features the Star Trek character playing the role of DJ to a crowd of fans. As the science officer aboard the USS Enterprise, he is bound to know how to drop an impressive techno beat. This creative Star Trek t-shirt design will surely get a few chuckles from fellow fans and gawkers alike. Make sure to pick up this tee to show off your sense of humor as you rock out to DJ Spock. Link to: DJ Spock 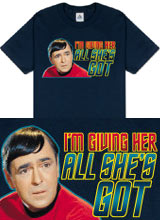 I'm Giving Her All She's Got t-shirt

"I'm giving her all she's got captain!" Did you read it with a Scottish accent? You should have. This shirt cites one of the most memorable Star Trek quotes spoken by Montgomery "Scotty" Scott. Wearing an original red Star Trek uniform, actor James Doohan's face on this tee clearly expresses his concern, as shown in many classic episodes. Wouldn't you be concerned if you had to tell the captain that there could be danger brewing with the engines? Scotty has been overlooked by many fans, so remind people of his undeniable importance to the crew. Wear it when your Star Trek XI t-shirts are dirty. Link to: I'm Giving Her All She's Got 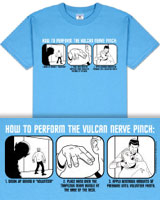 Ever wonder how to perform the Vulcan nerve pinch? Consider this your "how to" manual complete with diagrams. Your first obstacle is finding a "volunteer" to perform the move on. Once you have located a willing participant, place your hand over the trapezius nerve bundle at the base of the neck and then apply pressure until they drop. Spock made this nerve pinch famous on the Star Trek television series using it to subdue harmful humanoids. Grab this "how to" tee now. It's an alternative to a phaser. Link to: Vulcan Nerve Pinch 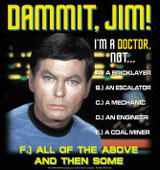 "Dammit Jim! I'm a doctor, not a [fill in the blank]." Dr. McCoy expressed his frustration to Spock and others almost every episode when expected to do something other than his job. This Star Trek t-shirt is a humorous take on the constant issue that plagued "Bones". This standard black tee features the irritated Dr. McCoy in his blue Star Trek uniform along with some "fill in the blank" options. Link to: Dammit Jim 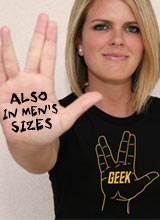 Palm forward, fingers parted in the middle, there is no mistaking it. You just recognized the Vulcan hand salute made famous by Spock of Star Trek, but did you know that actor Leonard Nimoy created it? He adapted the salute from a Priestly Blessing where a similar hand gesture is used to indicate the letter Shin to mean "Almighty". Here, the salute pays tribute to geek culture. Wear it to share the Spock quote "Live Long and Prosper" with your friends as you wish them well. This is a humorous Spock shirt with a story. Get your hands on this tee and share the Vulcan hand salute history. Link to: Live Long and Prosper Geek 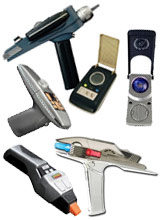 The perfect Star Wars costume accessories that can also be used as toys and collector's items, these Phasers and Star Trek Communicators bring to life the fictional instruments by giving you detailed props through which you can live out your deep space fantasies. Due battle with Star Trek Phaser replicas that simulate versions seen in the original series, The Next Generation, The Wrath of Khan and more. Pair them with Communicator replicas, which are the equivalent of highly advanced cell phones that don't require sattelites to function. Link to: Star Trek Phasers and Communicators