Produced by Hasbro, G.I. Joe (General Issue Joe) action figures first landed on toy store shelves in 1964 in response to the commercial success of the Barbie doll for girls. In 1982, the original 12-inch figure was abandoned for a smaller, 3 3/4-inch scale, which was the same size as Kenner's wildly popular Star Wars figures. A G.I. Joe comic book and the 1985 animated G.I. Joe cartoon helped to increase the popularity of the toy line. Here, we celebrate the real American hero with G.I. Joe t-shirts and clothing. Tees include the Snake Eyes G.I. Joe t-shirt, the Storm Shadow shirt and the Cobra t-shirt. Browse for other G.I. Joe clothes and merchandise, including sweatshirts, costumes, action figures and toys.
To buy a T-Shirt, click the image or link for store and size information. 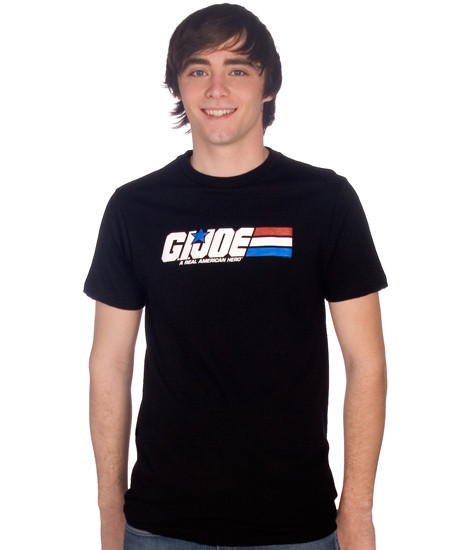 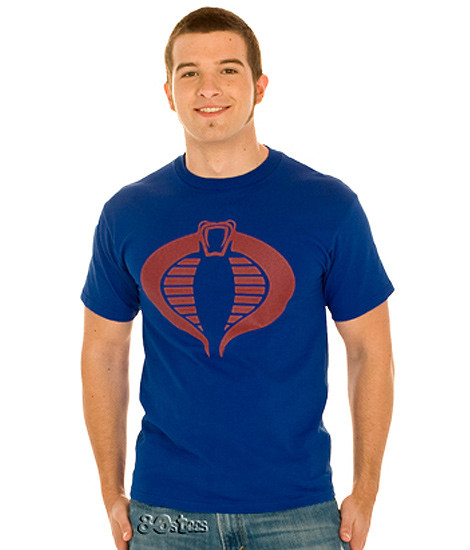 BUY
G.I. Joe Cobra t-shirt
Description: Make friends with the bad guys in this G.I. Joe Cobra shirt that features a red Cobra logo on the front. The COBRA Organization is a ruthless terrorist organization determined to rule the world. Led by Cobra Commander, they are the archenemy of G.I. Joe. The 1980s comic book written by Larry Hama depicted Cobra as a realistic military force, taking a much more serious tone than the G.I. Joe cartoon. See more Cobra G.I. Joe clothing below. Link to: G.I. Joe Cobra 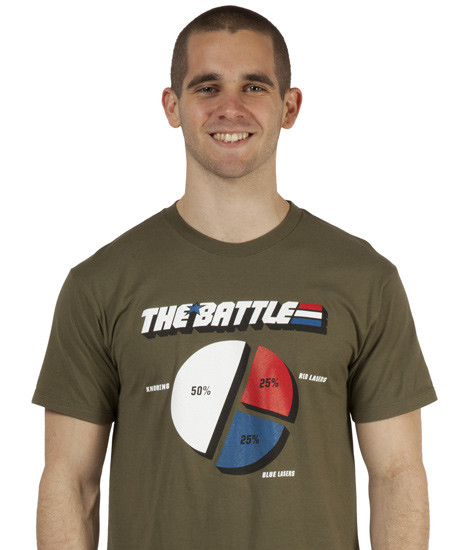 BUY
Knowing is Half the Battle
Description: The popular G.I. Joe cartoon is often remembered for its Public Service Announcements (PSAs) that involved one of the Joes giving an important safety lesson to a group of kids engaged in risky behavior. The PSA would end with the memorable exchange, "Now we know!" "And knowing is half the battle." These G.I. Joe t-shirts pay tribute to the catchy phrase with a pie style diagram that shows that knowing is half the battle, while red lasers and blue lasers make up the other half. Add this tee to your collection of G.I. Joe clothes. Link to: Knowing is Half the Battle 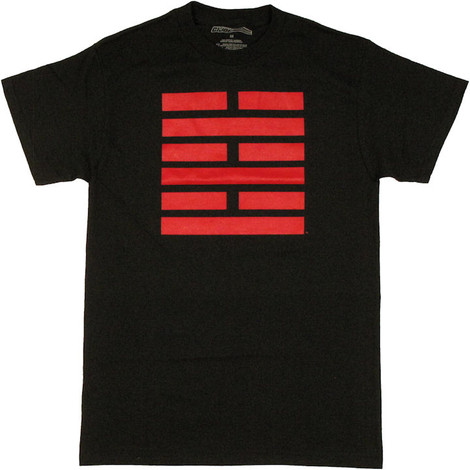 BUY
Snake Eyes Tattoo G.I. Joe t-shirt
Description: The Snake Eyes G.I. Joe t-shirt on the left displays the character's Arashikage ninja clan tattoo. Snake Eyes is a U.S. Army Sergeant First Class (E-7) and a hand-to-hand combat instructor. He is a full-fledged ninja trained in the use of the ninjato, or ninja's sword. A balaclava and eye-shield covers his face, which was disfigured in a helicopter accident that left him mute. In the G.I. Joe comic book, Snake Eyes would often team with Storm Shadow. Link to: Snake Eyes Tattoo G.I. Joe 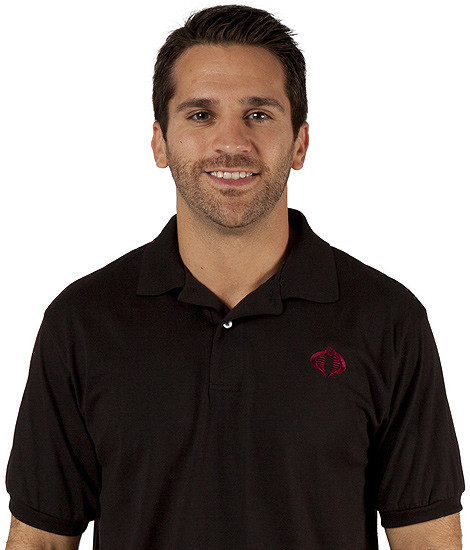 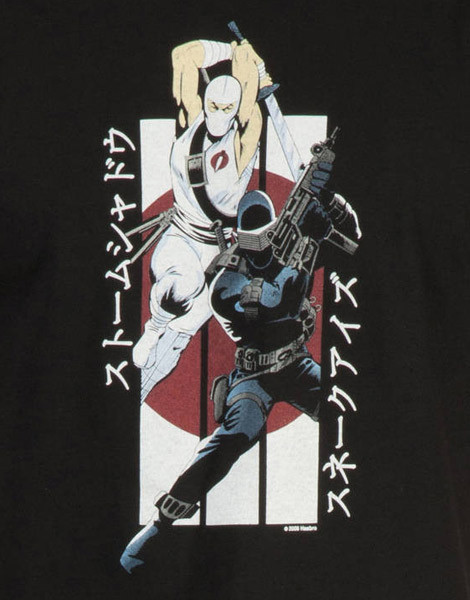 BUY
Snake Eyes / Storm Shadow G.I. Joe tee
Description: This black G.I. Joe tee features an exclusive action packed design that includes the ninjas Snake Eyes and Storm Shadow. Both characters, who were former comrades in Vietnam, are featured in the Larry Hama comic book and the G.I. Joe A Real American Hero cartoon. They were also included in the 3 3/4-inch G.I. Joe action figure line that hit toy store shelves in 1982. By 1985, with the help of the G.I. Joe cartoon and the Larry Hama comic book, G.I. Joe was ranked as the top-selling American toy, and these figures were two of the most popular. Add this tee to your collection of G.I. Joe clothing. Link to: Snake Eyes / Storm Shadow G.I. Joe 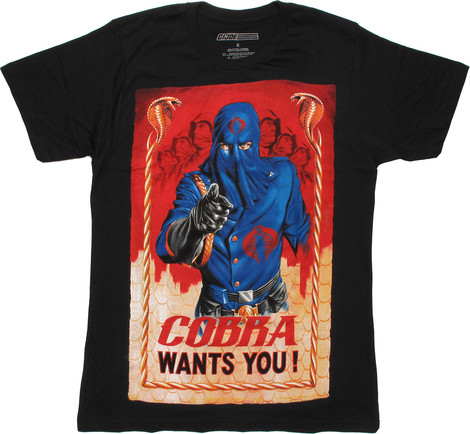 BUY
Cobra Wants You t-shirt
Description: These G.I. Joe t-shirts feature a vintage poster style design that reads, "Cobra wants you!" Collect one today with 1960s vintage G.I. Joe Action Soldier figures. Initially, there were 4 figures to represent all four branches of the armed forces. Action Soldier represented the Army. This led to the coining of the term "action figure". Add this classic Uncle Sam inspired design or a costume tee to your collection of G.I. Joe clothes and toys. Link to: Cobra Wants You 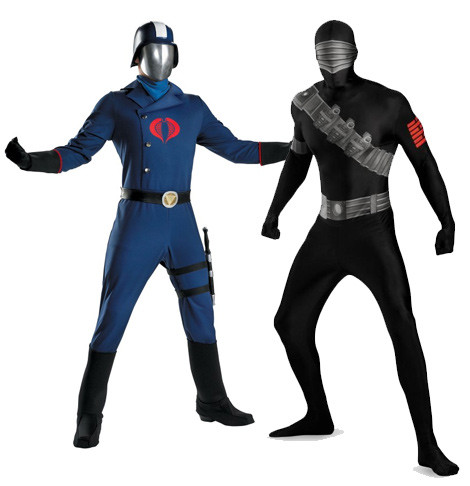 BUY
G.I. Joe Costumes - Snake Eyes, Etc.
Description: The cool Snake Eyes costume is perfect to wear overtop of your favorite G.I. Joe t-shirt for an intimidating warrior combination. Embody one of the most celebrated characters from the G.I. Joe cartoon, who joined Cobra in order to infiltrate the organization in an attempt to discover the individuals responsible for the death of his uncle. The officially licensed Snake Eyes G.I. Joe costume includes the jumpsuit, hood and visor. Upgrade your outfit to include the Snake Eyes gloves and the Snake Eyes sword that displays the Arashikage ninja clan tattoo symbol. Don't wait to bring your favorite figure to life. Link to: G.I. Joe Costumes - Snake Eyes, Etc. 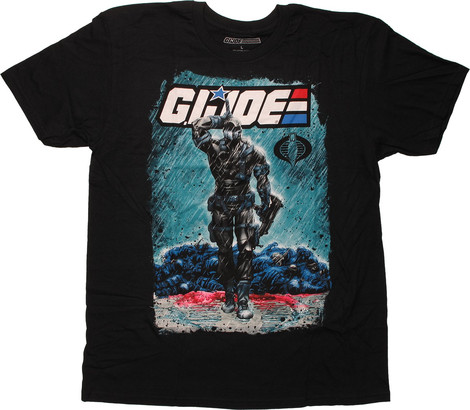 BUY
G.I. Joe Snake Eyes Comic Art t-shirt
Description: The Storm Shadow and Snake Eyes tees displayed here show the comic and box art for these two popular G.I. Joe action figures. Snake Eyes is standing and drawing his sword. The comic art shirts feature him with his wolf Timber. Storm Shadow is holding two swords. Purchase one of these tees with a G.I. Joe Cobra t-shirt to impress Cobra Commander. In the G.I. Joe cartoon Cobra Commander covers his face to conceal disfigurement, while in the G.I. Joe comic book he hides his face to protect his identity. Wear this under a Cobra G.I. Joe sweatshirt hoodie. Link to: G.I. Joe Snake Eyes Comic Art 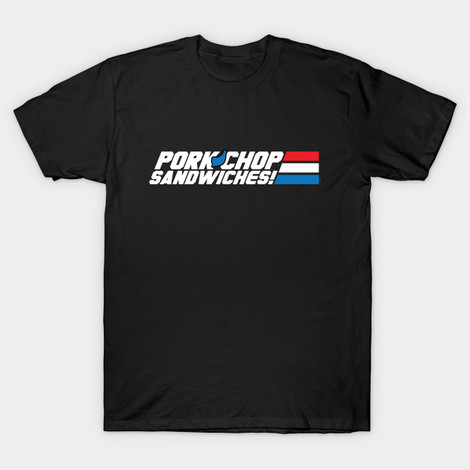 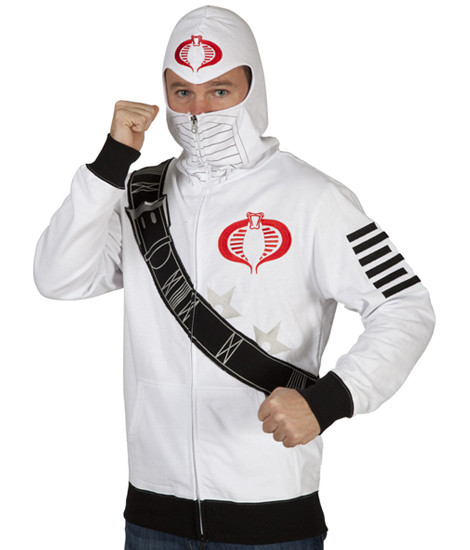 BUY
Storm Shadow Costume Hoodie
Description: In the case of this Storm Shadow costume design, it's what's on the outside that counts. These Storm Shadow G.I. Joe t-shirts and hoodies reveal the enemy soldier's Arashikage ninja clan symbol on the sleeve, in addition to displaying his white ninja uniform and weapons on the front. Before his friend joined the side of the good guys, Storm Shadow hung out with his buddy from Vietnam, Snake Eyes, along with the wolf Timber. Capture the attention of everyone around you in this unique G.I. Joe t-shirt or hoodie disguise that is a creative addition to this gallery of G.I. Joe clothes and merchandise. Link to: Storm Shadow Costume Hoodie 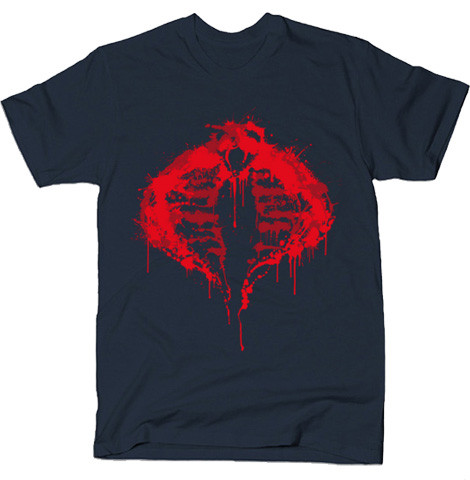 BUY
Cobra Inked Logo tee
Description: Since Cobra Commander is often hunting for the Joes in order to destroy them, this inked style Cobra Logo t-shirt is the perfect tribute to the evil Cobra Organization. This Cobra Commander tee will inspire you to work with Destro and The Baroness, who help Cobra Commander to implement his ruthless schemes. However, they're usually distracted with their incessant flirting. Wear this shirt underneath your Cobra G.I. Joe hoodie sweatshirt or costume. Link to: Cobra Inked Logo 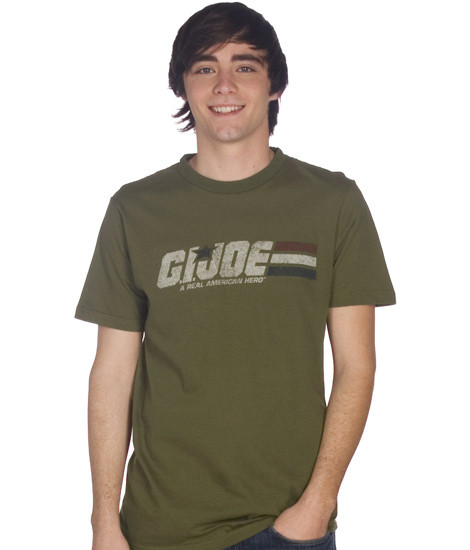 BUY
Army Green G.I. Joe Logo shirt
Description: Fight for freedom wherever there's trouble in this classic piece of G.I. Joe clothing. The authentic military style green tee features a distressed G.I. Joe logo on the front that sits above the G.I. Joe cartoon tagline, "A Real American Hero". Honor Duke, Mutt, Snake Eyes, Roadblock, Breaker, Tunnel Rat and the rest of the special mission force who defend human freedom against Cobra the enemy. This tee is the perfect gift for every G.I. Joe fan, or any fan of 80s nostalgia. With this retro t-shirt on your back, you'll be saying, "Yo Joe!" in no time. Link to: Army Green G.I. Joe Logo 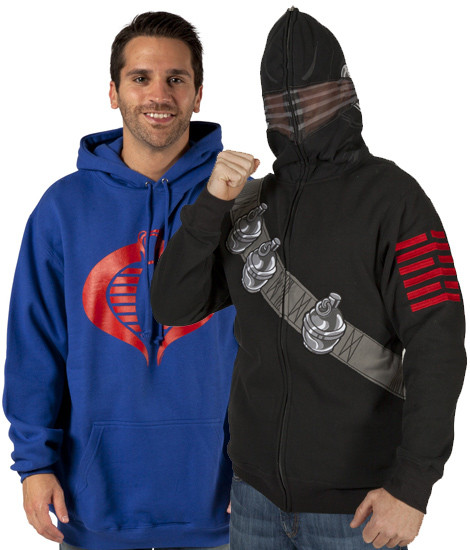 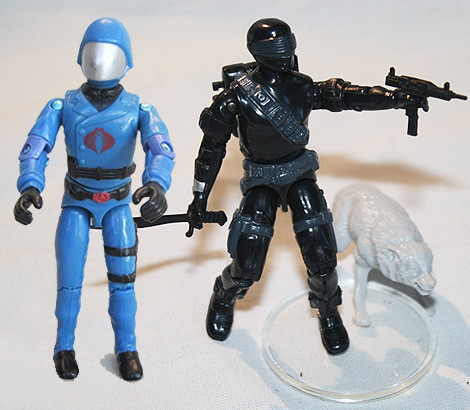 BUY
Vintage G.I. Joe Action Figures and Toys
Description: If you are a male who grew up in the 1980s and someone asks you what was your favorite childhood toy, one of the first things that you likely think of is G.I. Joe figures. These vintage toys were more than just plastic characters with bendable joints, they were 3 3/4-inch tall soldiers that transformed our bedrooms into epic battlefields where heroes fell, villains rose and good eventually triumphed over evil. Reenlist your favorite characters with a collection of vintage G.I. Joe action figures and toys. Link to: Vintage G.I. Joe Action Figures and Toys