James Cameron's Avatar movie is a revolutionary digital 3D science fiction film that follows the journey of Jake Sully (Sam Worthington) from wounded soldier to Avatar. After being recruited by the Avatar program, Jake is sent to Pandora to help overtake the natives known as Na'vi. After encountering them, he questions the motives of the military he is fighting for and finds himself in love with a Na'vi named Neytiri (Zoe Saldana). If this story gets your heart racing, then peruse our gallery of James Cameron Avatar t-shirts like the Navi Neytiri Avatar movie t-shirt and the Flying Jake Avatar tee. Also, see Avatar costumes and action figures.
To buy a T-Shirt, click the image or link for store and size information. 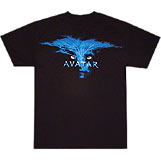 Pandora has many sacred sites but the Hometree is the center of it all. Here, many Na'vi live among its alcoves and connect with the deity who keeps Pandora in harmony, Eywa. Under the Hometree lies the valuable unobtainium deposit that leads the Na'vi and military to war. Commemorate the epic battle with this Hometree t-shirt or get in on the action with the Avatar video game available below. Link to: Avatar Hometree 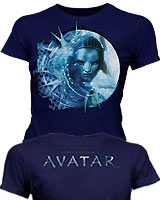 While Jake Sully goes to Pandora to fight for a precious mineral, he ends up finding something even more valuable. After being rescued from some vicious Viperwolves by the Na'vi princess Neytiri, he is soon reminded of what is truly important. Although the circumstances are far from ideal, love soon blossoms between the two enemies. Remind yourself of the important things in life by getting this Navi Neytiri t-shirt, or act out the battles yourself with a Jake Sully costume or Avatar action figures. Link to: Avatar Neytiri 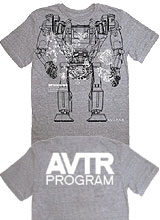 This James Cameron Avatar t-shirt features the technical drawing of the MK-6 Amplified Mobility Platform, better known as the AMP suit. This specialized combat mechanism allows humans to walk on Pandora without being an Avatar. It has a built in breathing system so the human can withstand the environment. It is maneuvered through mind control and is strong enough to level trees. If the user dies in action, the suit is programmed to return home to retrieve a new person. If this impresses you too, then check out the toys in the gallery for your own Avatar Amp Suit toy. Link to: Avatar Amp Suit 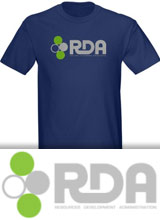 With exclusive mining rights to Unobtanium, the RDA (Resources Development Administration) is the largest non-governmental organization in space. Jake Sully was recruited by the organization to take his brother's place. In avatar form Jake bonds with a mountain banshee, a rite of passage for all Na'vi warriors. Most banshees live in the hills but the bonded ones live in the top of the Hometree. Jake Sully bonds with a mountain banshee to help the RDA infiltrate the Na'vi. Grab this Avatar movie shirt today to support the RDA. Check out the Avatar soundtrack to get the soaring feeling of a banshee. Link to: Avatar RDA 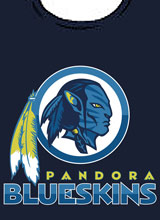 Neytiri is not only a Na'vi, she is the princess of the Omaticaya Clan and a former Pandora Blueskins cheerleader. Support her favorite team, the Pandora Blueskins, who had to stop their season to protect their Hometree. Under the Na'vi Hometrees is where the mineral unobtainium resides, which the RDA wants to mine. Despite the turmoil, Neytiri's love helps to transform one of the intruders, Jake Sully, from military man to heartfelt Na'vi (aka Pandora Blueskin). Pair this Pandora Blueskin design with a Navi Avatar Neytiri shirt or an Avatar costume, video game or action figure. Link to: Pandora Blueskins Na'vi 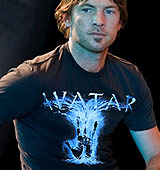 The Na'vi people have very fascinating features. Aside from the more noticeable things like the sparkly symmetrical dots, bright yellow eyes and catlike tails, they also have very graceful hands with three fingers and a thumb, all without joints. If these features interest you, check out the Avatar action figures to see them in more detail. Pair them with any of our James Cameron Avatar t-shirts for a gift. Link to: Avatar Hand Tree 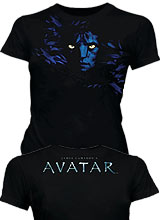 After being paralyzed in a battle that he isn't sure why he was fighting in, Jake Sully decides to join the Avatar program for a second chance at walking. He is enlisted to go after a valuable mineral to help save Earth from an energy crisis. To do this, Na'vi Avatars are created for the humans because they cannot withstand Pandora's environment. These Avatars are controlled through the person's thoughts as though they are one. If Jake's journey excites you, get this Avatar tee today. For some real action, get the Avatar video game or live the adventure with Na'vi action figures and toys. Link to: Jake Sully Face 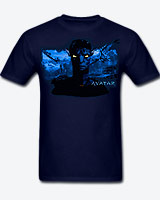 If you are looking for something more dazzling, then we have you covered. While all of our Avatar t-shirts will get some looks, this glow-in-the-dark one will help light up the imagination. If you prefer Jake Sully (Sam Worthington) over Neytiri (Zoe Saldana), Dr. Augustine (Sigourney Weaver), Trudy (Michelle Rodriguez) and the other characters, then this glow-in-the-dark Avatar movie shirt is for you. Also, check out the collection of Avatar action figures, video games and more below. Link to: Glow-in-the-Dark Avatar 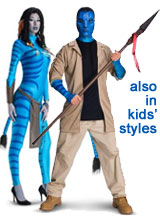 Get one step closer to the magical world of Pandora with these Jake and Neytiri Avatar costumes, masks, wigs and accessories. Perfect for Halloween or your next costume party, these outfits will allow you to embody your favorite characters from the film without ever leaving Earth. For men and boys, there is the Jake Sully costume that shows everyone that you are a rugged warrior who is ready to protect the Na'vi. For women and girls, there is the stunning Neytiri costume complete with bold blue stripes, gray apron, arm gauntlet and tail. Also browse Avatar masks and other merchandise. Link to: Avatar Costumes 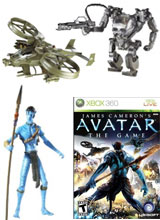 Relive all of your favorite movie moments that unfolded on the planet Pandora with these Avatar action figures, toys and video games. Collect Na'vi figures including Neytiri and the Leonopteryx flying creature on which she can ride. Do battle with Colonel Miles Quaritch in his Amp Suit or take to the skies in an RDA Scorpion Gunship toy. If you like playing with controllers more than figures, pick up the Avatar video game that lets you play on either the side of the RDA or the Na'vi. Link to: Avatar Action Figures and Video Games