The Married with Children TV show lasted for eleven seasons and told the story of a working class dysfunctional family. The cast includes Ed O'Neill who plays Al Bundy, an unsuccessful shoe salesman; Katey Sagal who plays Peggy Bundy, Al's lazy red-headed housewife; Christina Applegate who plays Kelly Bundy, their promiscuous idiot daughter; and their virginal son Bud Bundy, portrayed by David Faustino. Join Al's men's club with the No Maam shirt, cheer him on with a Polk High t-shirt and jersey, or support his famous Bundyisms with an Al Bundy t-shirt.
To buy a T-Shirt, click the image or link for store and size information. 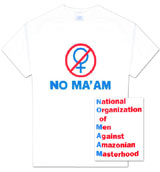 No Ma'am. The National Organization of Men Against Amazonian Masterhood was created by Al and his friends to fight the growing power of women after it started interfering with their manly ways. Distinguished by their No Ma am shirt, this organization helps its members deal with daily stress through promoting bowling, beer and the nudie bar. Pledges are welcomed...to be humiliated. Just ask former pledge, Bud Bundy. Link to: No Ma'am 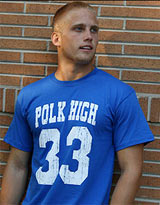 Score a touchdown in this Al Bundy Polk High t-shirt that displays the school name on the front along with Al's number, "33". The back of the shirt displays the last name "Bundy" near the top, with an identical image of the distressed number "33" underneath it. It's perfect for a game of pick-up football in the park or a casual afternoon in front of the TV watching Psycho Dad. Browse the Polk High jersey below for the perfect Al Bundy costume that will help prepare you for the rematch against Polk High's notorious rival, Andrew Johnson High School. Link to: Polk High Football 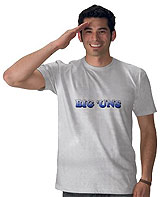 Consider this shirt our salute to Al Bundy's (Ed O'Neill) favorite girly magazine, Big 'Uns. In your time of need, you can find them hidden around the Bundy household, including under the couch cushions, in the trunk of his Dodge or stockpiled in the basement, anywhere away from Peg. Grab this Married with Children t-shirt to promote the magazine. With your help, Al can stop keeping them in business himself and buy some food for Peggy, Kelly, and Bud. Pledge your allegiance to Big 'Uns. Link to: Big 'Uns 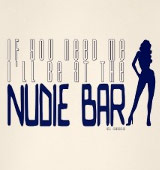 I'll Be at the Nudie Bar t-shirt

No mystery about where Al is going, "If you need me, I'll be at the nudie bar." Whether he is telling his wife Peg, daughter Kelly or son Bud, there is no shame in his game. This famous Al Bundy quote and matching hot lady sum up his happiness in life. This Al Bundy shirt captures most of this shoe salesman's life...aside from the beer and remote control. Show how you admire his lifestyle with this tee. Give it as a gift with the Bundy No Maam shirt. Link to: I'll Be at the Nudie Bar 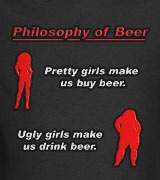 Al may not be a complex man but he always had a way with words. There is no mistaking the meaning because of his blunt nature. You may recognize his philosophy of beer represented on these Married with Children t-shirts. As once described to Marcy (Amanda Bearse), "Pretty girls make us buy beer. Ugly girls make us drink beer." This Al Bundy t-shirt is a wealth of knowledge for you to share...over a beer. Order it with Al's classic No Ma am shirt. Link to: Al Bundy's Philosophy of Beer 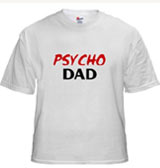 Who's that riding into the sun? Who's the man with the itchy gun? Who's the man who kills for fun? Psycho dad. Psycho dad. Psycho dad! Ah yes, the theme song to Al's favorite TV show. Perhaps it's because he is one of the few men Al can relate to. Too bad for Al that Darcy worked to have it cancelled, citing extreme violence. If you are ever feeling like a Psycho Dad, this tee is for you. Link to: Psycho Dad 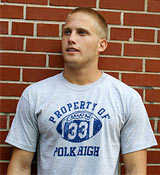 This classic grey Polk High t-shirt is a tribute to Al Bundy's impressive record breaking football career. While he did not go pro because of his unfortunate marriage mishap to Peggy (Katey Sagal), he could have. Four touchdowns in the city championship game, including the winning one in the last moments of the game, is about as good as it gets. Grab this shirt to wear under your Polk High jersey costume as a tribute to Al and his alma mater. Link to: Property of Polk High 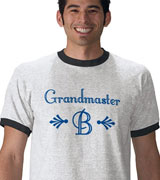 Bud Bundy (David Faustino) learned early on that he can't attract women to save his life. His answer to this problem is to reinvent himself. "As of now my story is that I'm a bad boy rapper from the streets of New York. Goodbye Bud Bundy, hello Grandmaster B." While in theory this could work, it doesn't work for poor Bud. Not only is he a bad rapper, but being referred to as Ghostbuster B doesn't help either. Get it with a No Maam shirt for the perfect combo. Link to: Grandmaster B 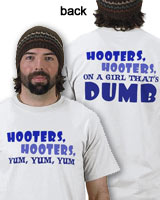 "Lie if your wife is awaking. Lie if your belly is aching. Lie if you think she's faking. Lie, sell shoes, lie." The official Bundy credo...or is it? Sorry folks, that is incorrect. The real Bundy credo as told by Al to his son Bud is, "Hooters hooters yum, yum, yum. Hooters hooters on a girl that's dumb." This Married with Children Al Bundy t-shirt is available in a variety of colors and clothing styles. It is sure to get some looks and possibly some remarks. Wear it in support of the credo. Link to: Hooters Hooters Yum Yum Yum 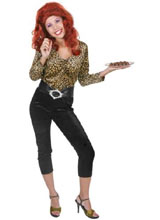 If you are trying to lure in an unsuspecting shoe salesman or an ex Polk High football superstar, then this Peggy Bundy costume is a perfect fit for you. Impress the Al Bundy of your eye with this costume that includes a form fitting leopard print top, cropped black pants and a shiny black belt. Top this look off with a red wig and loads of makeup to get yourself out of cooking, cleaning and caring for children. If you've already wrangled your man, consider pairing this Peggy Bundy costume with Al's Polk High football jersey for an award winning couple's costume, or dress him in the No Ma am shirt. Link to: Peggy Bundy Costume 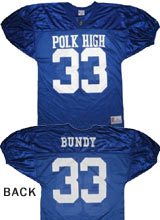 Emulate Al Bundy at the height of his life...high school! This officially licensed Polk High jersey is just like the one Al sported during his peak. His number 33 is predominantly displayed with Polk High on the front and Bundy on the back. Be sure to include the story of Al's four touchdowns in one game to get the full effect. It's rather impressive for a now struggling women's shoe salesman. You can select a new or distressed style for this blue jersey. Be careful though, this jersey may attract a Peg wannabe that you'll have trouble shaking. Wear it overtop one of your Married with Children t-shirts. Link to: Al Bundy Football Jersey 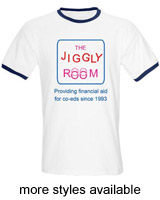 We all love watching Al with his gooney friends, whether they're discussing the latest issue of Big 'Uns or hanging out at The Jiggly Room, advertised here. Al represents the overworked male, especially when you factor in Peggy's marital requirements. Celebrate the show and join Al's bandwagon by grabbing this tee today. Wear it when your Al Bundy Polk High t-shirt is in the wash. Link to: Married With Children Jiggly Room