The Sesame Street TV show is an educational American children's series that debuted in 1969. The show was designed to prepare kids for school by teaching basic concepts such as letters, numbers and colors through Jim Henson puppets. Big Bird and his gang of friends, including Elmo, Grover, Count, Oscar the Grouch, Cookie Monster, Snuffleupagus, Bert and Ernie, have been able to keep learning entertaining for many generations of youth. Peruse our Sesame Street tees like the hilarious "I was raised on the street" Sesame Street t-shirt and the Talk Trash Oscar Grouch shirt. Warm up in a Sesame Street hoodie sweatshirt.
To buy a T-Shirt, click the image or link for store and size information. 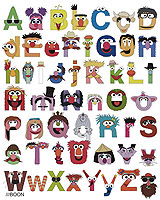 This design depicts the uppercase and lowercase versions of each letter of the alphabet with a Sesame Street twist. Sure, it's no surprise that 'C' is Cookie Monster, 'e' is Elmo and 'G' is Grover, but can you guess what 'Y' and 'y' are? Yep, the Yip Yip aliens. Get one of these Sesame Street t-shirts for the Sesame Street fan in your life. There is no better way to show your appreciation for the variety of characters on the TV show. Wear it under a Sesame Street sweatshirt. Link to: Sesame Street Alphabet 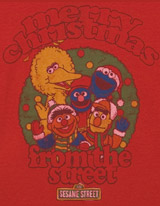 Merry Christmas from the Street t-shirt 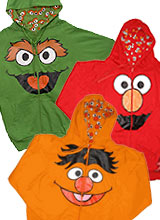 When you're up sweeping the clouds away on your way to where the air is sweet, you might find yourself getting a bit chilly. Remedy the situation with a Sesame Street hoodie. Choose from among some of the most memorable characters, including Bert and Oscar the Grouch. The Sesame Street TV show was designed around the principle that if you can hold the attention of children, then you can educate them. Through fun characters like the ones on these Sesame Street sweatshirts, that theory proved to be true. Outfit yourself in the reversible Oscar the Grouch hoodie shown on the left. Link to: Sesame Street Character hoodies

Growing up on the street can make you more susceptible to various addictions, as this bestselling Sesame Street Cookie Monster shirt demonstrates. The design features the cookie loving monster passed out after a shameless cookie binge. We've all had similar moments of weakness where we lose our self control and splurge, whether it be with cookies, candy bars or ice cream. Recognize the legendary monster by pairing this with a classic Bert and Ernie Sesame Street t-shirt for you and your best friend. Link to: Cookie Monster Binge 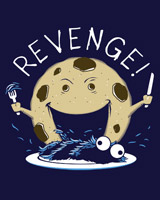 Here, the tables have been turned on Cookie Monster. Did he really think he could just devour all of those cookies for all those years and there would be no consequences? Obviously, this funny design proves that he was dead wrong, literally. You can only abuse cookies for so long before they fight back, either in terms of weight gain or cold-blooded revenge. Pair it with Count Von Count Sesame Street tees for an educational combo. One emphasizes the importance of restraint, while the other emphasizes the importance of mathematics. Link to: Cookie's Revenge 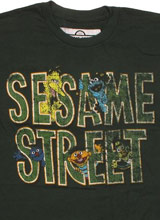 These adorable black Sesame Street t-shirts are a basic and stylish way to celebrate your favorite childhood characters, including Grover, Elmo, Cookie Monster and The Count. They are in good spirits as they stroll down the street. These characters' smiles will lighten up anyone's mood, as they will remind both younger and older fans of sunny days. So if you are looking for a stylish design that features the cast, snag this fitting Sesame Street tee today and give a little spin for everyone to see. It's friendlier than a "trashy" Oscar Grouch shirt. Link to: Sesame Street Vintage Name 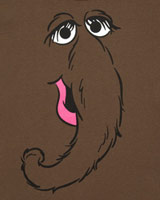 Have you ever seen Snuffleupagus? For many years, Big Bird was the only one who interacted with Snuffy on the TV show. No one else believed that Snuffleupagus was real, and Big Bird often used his woolly mammoth like friend as a scapegoat when something went wrong. During the 2,096 episode that aired in 1985, Snuffy was formally introduced to the main human cast. Big Bird's "imaginary" friend was imaginary no more. This Snuffleupagus t-shirt celebrates the adorable character. Link to: Snuffleupagus 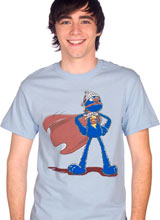 Super Grover is the resident superhero of the Sesame Street gang, even if he isn't always very helpful. Posing as Grover Kent, a mild-mannered doorknob salesman in Metro City, Super Grover comes to the rescue wherever and whenever he's needed. Wear this funny tee to show people that you support the fuzzy blue hero. This Sesame Street design features him standing with his classic cape, helmet and the lightning bolt 'G' logo on his chest. Wear it with an Oscar the Grouch Sesame Street hoodie sweatshirt and it will be all good in your hood. Link to: Super Grover 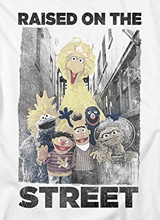 Raised on the Street t-shirt

This I Was Raised on the Street Sesame Street t-shirt features friends including grouchy Oscar with the playful phrase "Raised on the Street". This piece of clothing is sure to stir up some feelings of nostalgia in all of the people who grew up with these characters. If you want to get even closer to them, check out the rest of the merchandise displayed here. Choose from plush stuffed animals and toys for all ages. We suggest the Sesame Street hats, because you can cap off your love for your favorite characters from the TV show. Link to: Raised on the Street 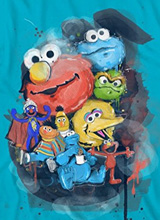 Sometimes friends are hard to come by but not for Big Bird. He is one of the lucky ones. These classic Sesame Street tees feature some of his closest friends, including Bert, Grover, Elmo, Cookie Monster and Oscar the Grouch. Grab these Graffiti Sesame Street t-shirts to show that friends will always be around when you need them, even in the darkest of times. Link to: Sesame Street Graffiti 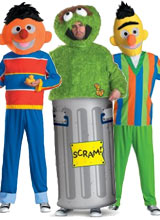 Our collection of Sesame Street costumes is sure to have you singing about sunny days sweeping the clouds away. We have children's and adult costumes suitable for any age and size. There is a wide variety of characters that have been introduced throughout the years to choose from, including Super Grover, Bert, Ernie, Elmo, Abby Cadabby and Oscar. You and your kids will have a blast in any of the costumes. For a milder costume idea, try one of the Sesame Street sweatshirt hoodies available in this gallery. You can even wear your Snuffleupagus or Oscar Grouch shirt underneath. Link to: Sesame Street Costumes 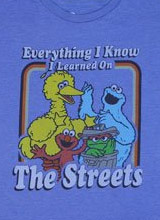 I Learned on the Street t-shirt

If you were raised on the street, don't worry we have you covered too. The Everything I Know I Learned on the Street Sesame Street t-shirt features Big Bird, Elmo and Oscar partaking in some less wholesome activities than say counting backward from one hundred or singing about the colors of the rainbow. Let's face it, not everyone that watched the show turned out to be a teacher, lawyer or doctor. If this style is not up your alley, then pick a more wholesome Sesame Street tee from the gallery or outfit yourself in a Sesame Street hoodie. See related stuffed animals, toys and hats by exploring the gallery. Link to: I Learned on the Street 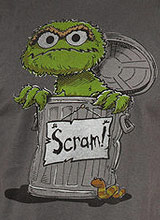 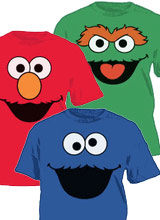 These clothing items display the faces of some of the most popular Sesame Street characters. They are perfect to wear as costumes whether you are a fan of Cookie Monster, Elmo, Big Bird, Oscar, Zoe or Abby Cadabby. Get a glimpse of what you would look like as one these characters by getting one of these costume style Sesame Street tees that are available in both adult and child sizes. Your selection is bound to get a chuckle out of your friends. Be sure to pick out fun Sesame Street t-shirts for them to wear as well. Link to: Sesame Street Face 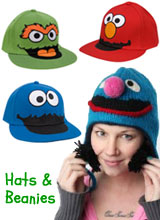 There's no better way to shield your face from overly sunny days than with one of these character Sesame Street hats. A fan favorite among adults and teens, these caps are the perfect way to show everyone your favorite member of the street. From Bert and Ernie hats to warm Oscar and Grover knit beanies, you'll be ready for all seasons. The Sesame Street beanies are also a great way to show off a little character on the ski slopes. Link to: Sesame Street Character Hats and Beanies 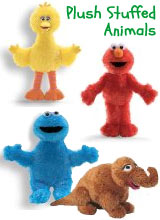 Welcome nearly the entire cast of characters into your home with these Sesame Street stuffed animals from the quality toymaker Gund. Bring home favorites like Big Bird, Elmo, Cookie Monster and Oscar the Grouch stuffed animals, in addition to one of a kind characters like Abby Cadabby, The Count, Grover and Snuffleupagus plush toys. Together, they can help make learning fun, as your child reenacts the lessons he or she learns on the TV show. Pair the plush toys with a t-shirt from the gallery. Link to: Sesame Street Plush Stuffed Animals