The DC comic book character Green Lantern first appeared in All-American Comics #16 in July of 1940. In 1959, DC revamped the idea and created the Green Lantern Corps, a group of intergalactic protectors enabled by power rings. Hal Jordan, the most notable of these superheroes, is recognized for being a founding member of the Justice League, which also includes Superman and Batman, among others. In 2011, actor Ryan Reynolds took on the role in the Green Lantern movie. Peruse our gallery of Green Lantern t-shirts, suits and costume tees, including the DC Comics shirt, Green Lantern Logo t-shirt and Sheldon tee. Pair them with a Green Lantern power ring to do battle with the evil Sinestro Corps.
To buy a T-Shirt, click the image or link for store and size information. 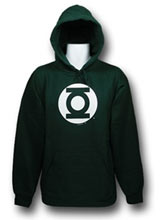 This logo Green Lantern hoodie is an ideal addition to any DC comic book fan's collection. Not only does this clothing item keep superhero fans warm in inclement weather when a logo tee isn't practical, it also works as a costume. Wear it with your favorite Green Lantern movie shirt for the perfect combination. For more galactic fun, check out the Green Lantern action figures and toys below. Don't miss the replica rings that will help you when you're taking on Sinestro and the bad guys. Link to: Green Lantern Hoodies 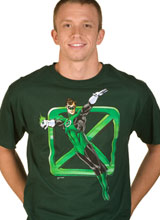 If you are a fan of the hit show BBT then you will surely remember this Sheldon Green Lantern shirt from seasons three and four. If you recall, it gave Sheldon the power to come to the rescue when Leonard's combustible gel experiment went awry. Channeling the superhero ultimately helped Sheldon save Leonard's life. To channel Hal Jordan yourself, check out the Green Lantern movie costumes below in the gallery. The suits will have you flying high in no time. Link to: Sheldon's Green Lantern 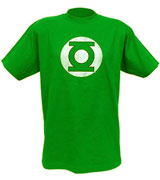 Pair this distressed Green Lantern logo shirt with a power ring and you'll be ready to protect Sector 2814 sooner than you can say 'Abin Sur'. This design can be used not only for daily use but also as a casual costume for anyone who wants to dress up without going all out. For more exciting adventures, check out the DC comics Green Lantern merchandise in the gallery, including replica toy lanterns, action figures and more. Link to: Distressed Green Lantern Logo 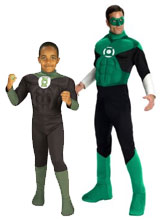 If Green Lantern shirts aren't enough to quench your superhero cravings, then perhaps a comic or movie costume is in order. We have a variety of men's, women's and children's Green Lantern suit costume options that any DC comic book fan would give the green light to. These are ideal for Halloween, conventions or simply for fun. Order a female Green Lantern costume to create a matching couples ensemble. Get in on the action; they are out of this world. Link to: Green Lantern Costumes 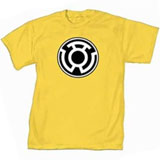 This yellow Sinestro t-shirt is for people who would prefer to be the villain for a while rather than the hero. He is formerly the mentor of Hal but has since switched sides and is making himself known by creating a band of evildoers known as the Sinestro Corps. Pair it with a Green Lantern movie shirt, hoodie or hat. Link to: Sinestro 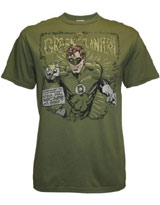 Show everyone how glad you are that your favorite superhero and Justice League member has been brought into the spotlight by acquiring this comic style clothing item. This vintage style Green Lantern Oath shirt features a portion of the Corps Oath, "In brightest day, in blackest night, no evil shall escape my sight." To see through the dark of evil, take a look at the Green Lantern lantern in the gallery. Link to: Green Lantern Oath 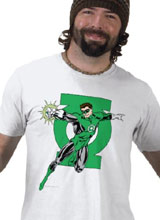 The DC Comics Green Lantern t-shirt shown here features the hero in front of his logo symbol wielding his power ring to battle evil. Hal Jordan was the first Earthling to become a part of the force and do good for the Guardians of the Universe. His ring transforms his willpower into green energy that protects him and others against evil. Catch up on his heroic tales with merchandise from below, or get a Green Lantern suit costume to celebrate the movie and further embody the superhero. Link to: DC Comics Green Lantern 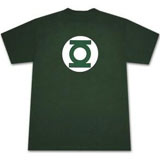 If you want to be a member of the Corps, then this logo Green Lantern costume tee will help get you there. Don't restrict your options to Hal, you could be the original character Alan Scott, created during the Golden Age by Martin Nodell and Bill Finger. There are also alien heroes you could choose to be like Brik, Aa or Tuebeen. To switch sides and be a villain, check out the Sinestro shirt in the gallery. Link to: Green Lantern Logo 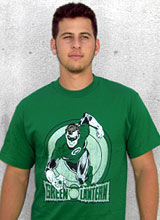 Hal Jordan to the rescue! Don't run from your desire for a Green Lantern movie t-shirt. This clothing item highlights the superhero's ability to put fear aside and tackle things head on. Luckily for the inhabitants of Sector 2814, he is known for being the most fearless among the Corps members and never backs down from a challenge. If that sounds a lot like you, snag your tee today. Pair it with a Green Lantern costume so you can dress up in the movie character's form fitting suit and save the day. Link to: Hal Jordan Green Lantern 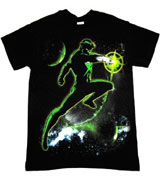 It's a bird, it's a plane, wait that is a different superhero. He isn't the only one who can charge through space though. Get one of these DC comics Green Lantern t-shirts featuring our favorite hero in green as he travels through the depths of space just like Ryan Reynolds does when he's wearing his Green Lantern movie costume and power ring. Link to: Green Lantern in Space 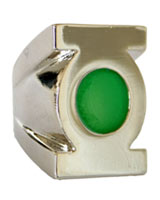 Join the Corps with one of these official Green Lantern metal power rings. The silver replicas come in seven different sizes, which allow them to accommodate fans of nearly any finger size. This costume accessory has a metal base with silver plating that gives it its shine, which contrasts nicely with the green enamel center. Harness the power of Hal Jordan with this silver Green Lantern metal ring. This replica is a nice ode to the Oath and character. Link to: Hal Jordan Power Rings, Green Lantern Metal Power Ring Replicas 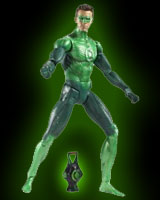 From a distance, this Green Lantern figure looks eerily similar to the movie character portrayed by actor Ryan Reynolds. Use your imagination to bring these movie characters the rest of the way to life, or choose toys based on the characters from the classic comic books. Portray the side of evil with Sinestro action figures or celebrate your allegiance to the Corps with a Hal Jordan figure. Get other toy characters like Abin Sur, Parallax and Kilowag. Link to: Green Lantern Action Figures, Sinestro and Hal Jordan Toy Figures