Created by David Chase, The Sopranos TV show initially aired on HBO for six seasons from January 10, 1999 to June 10, 2007. The Emmy winning show tells the story of mob boss Tony Soprano (James Gandolfini) and his attempts to juggle the demands of both his personal and professional relationships. Below, you will find a variety of Sopranos t-shirts and apparel. Our selection of tees includes the logo T, Satriale's Pork Store, Barone Waste Management and the Bada Bing Sopranos t-shirt. Over the course of the TV show's six seasons, Tony Soprano deals with a mountain of problems, from nearly getting whacked in season one, to his own constant infidelity to his wife Carmela (Edie Falco). In addition to the Sopranos t-shirts and apron, browse the gallery for the Sopranos hats, hoodie sweatshirts, Bada Bing clothing and The Sopranos cook book.
To buy a T-Shirt, click the image or link for store and size information. 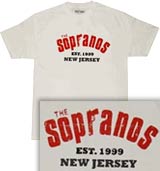 This Sopranos collegiate style tee features a red arched Sopranos logo. Underneath the logo, we see the location and year that the HBO Sopranos tv show began, "Est. 1999, New Jersey." This athletic gray Sopranos t-shirt is perfect for both moderate and hardcore fans of the HBO television series. It is the perfect attire to wear underneath your apron, as you perfect a recipe from your Sopranos Cook Book. Link to: The Sopranos Logo 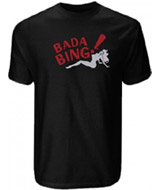 The Bada Bing! is a fictional strip club in the HBO Sopranos TV show. Now you can own this cool ringer Sopranos Bada Bing t-shirt. The front of the tee displays a distressed design that includes a silhouette of a mud flap girl sitting above the show's logo. Across the chest of the T is the exclamation, "Bada Bing!" This design may be inappropriate for younger fans. Look for a similar design on a stylish Bada Bing Sopranos hat. Link to: The Sopranos Bada Bing 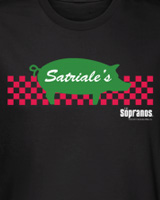 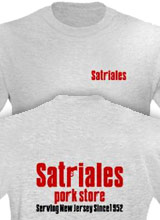 Pick up one of these unique white Sopranos tees that display a Sopranos Satriale's Pork Store and Meat Market logo on the front. These bestselling Sopranos t-shirts are a simple and fun way to celebrate your loyalty to the HBO Sopranos TV show. Hang out at Satriale's with Tony, Sil, Paulie, Big P and the rest of the DiMeo crime family. This logo design is also available on a white Sopranos t-shirt. Stop at Satriale's before you open The Sopranos Cook Book, which will help you make a perfect Marinara Sauce and some tasty Cannoli. Link to: Satriale's 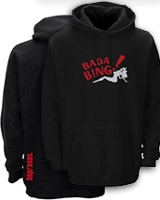 Despite being known locally for his personal and professional associations with the underworld, Tony Soprano has represented himself publicly as a waste management consultant for Barone Sanitation. The company is one of the many fronts for his criminal enterprises. He often holds meetings in his office at the Bada Bing go-go bar. Wear the Sopranos Barone Sanitation t-shirt under the Bada Bing Sopranos hoodie sweatshirt on the left. Wear it with Bada Bing Sopranos hats. Link to: Sopranos Bada Bing Hoodie 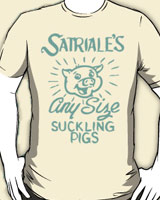 The next time you consider cracking open the Sopranos Cook Book be sure to stop by Satriale's Pork Store and Meat Market to pick up a few fresh ingredients. These Sopranos t-shirts advertise the fictional establishment, which is a regular hangout for current members of Tony's crew. It's the perfect shirt for gangsters because if you get blood on it, no one will know if it's human or from the store's meat cutter. Grind your own "meat" in this cool piece of clothing. Link to: Satriale's Meats Suckling Pigs 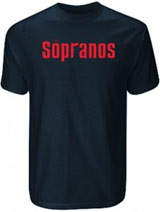 The front of this classic HBO Sopranos t-shirt features a red The Sopranos logo on the front. The logo is easily recognized by both fans and wannabe gangsters around the world. This T is great for any fan of the HBO TV show who loves listening to the smooth sounds of the Sopranos Soundtrack CD, with tunes that could mellow the mob, or even woo Meadow and Carmela Soprano. Order this design on a variety of different color tees and pair it with the Bada Bing t-shirt to start building your mafia wardrobe today. Link to: HBO Sopranos Logo 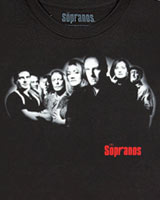 Hang out with your friends in The Sopranos Cast tee, which features Tony and some of the gang from the HBO Sopranos TV show. The familiar faces include Tony's wife Carmela, Paulie Walnuts, Christopher Moltisanti and others. The group portrait reminds us of the many enjoyable moments that the cast gave us. Pair this cast design with a Satriale's Pork Store and Meat Market tee. It is a great gift to give with the Sopranos Cook Book, which will surely add a little Italian aroma to your home. Link to: The Sopranos Cast 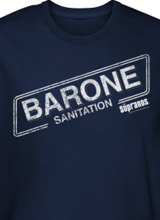 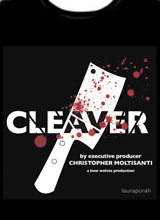 Cleaver is a fictitious mafia-slasher film that two of the Sopranos characters, Christopher Moltisanti and Carmine Lupertazzi Jr., produce in pursuit of their Hollywood dreams. The front of this tee features a logo design for the movie featured on the HBO Sopranos tv show. The movie is about Michael, a young wiseguy assassin, who gets betrayed by his people. They hack him to pieces and leave his body parts in dumpsters all over the city. Michael is somehow put back together, and he seeks vengeance on the people who whacked him. Link to: Cleaver Sopranos Movie 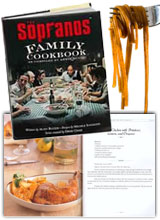 If you love Italian food, The Sopranos Family Cookbook will have your taste buds saying, "Bada bing!" Packed with a hundred recipes and tips, Artie Bucco (John Ventimiglia), who portrays a chef on the TV show, guides you through the Avellinese themed recipes. From Pasta Fazool, Marinara Sauce and Cannoli to grill time family favorites, show your loved ones that you don't have to be a gangster to know how to cook, it just helps to learn from them. Link to: The Sopranos Family Cookbook