The Karate Kid movie is an 80s underdog story that has become a modern day martial arts classic. Below, you will find a variety of Karate Kid t-shirts like the popular Sweep the Leg Cobra Kai t-shirt. Also, check out the Miyagi Car Wash Karate Kid t-shirt. First time viewers still cheer for Daniel LaRusso (Ralph Macchio), a New Jersey kid who doesn't quite fit in to his new Reseda, California neighborhood. Daniel attracts the attention of a girl from school named Ali Mills (Elisabeth Shue). Her boyfriend and his ruthless friends from the Cobra Kai Dojo decide to use Daniel as a human punching bag. Mr. Miyagi (Pat Morita) comes to Daniel's rescue and teaches him karate so that he can defend himself against the bullies from the Cobra Kai Dojo. Mr. Miyagi enters Daniel in the All Valley Karate Championship, so that he can prove himself both as a fighter and as a person.
To buy a T-Shirt, click the image or link for store and size information. 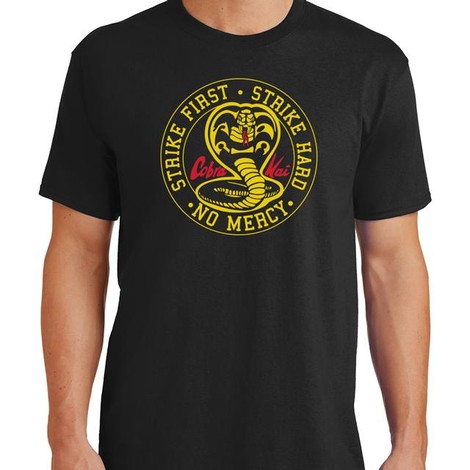 BUY
Cobra Kai t-shirts
Description: "STRIKE FIRST. STRIKE HARD. NO MERCY SIR." This is the motto of the Cobra Kai Dojo, led by their ruthless sensei, John Kreese. Now you can be a part of the Dojo with this Cobra Kai t-shirt that will have your friends bowing to their master, you! The Cobra Kai logo tee is available in a variety of sizes for you to choose from. The logo on the front features an eye-catching red, yellow and black cobra snake. Link to: Cobra Kai 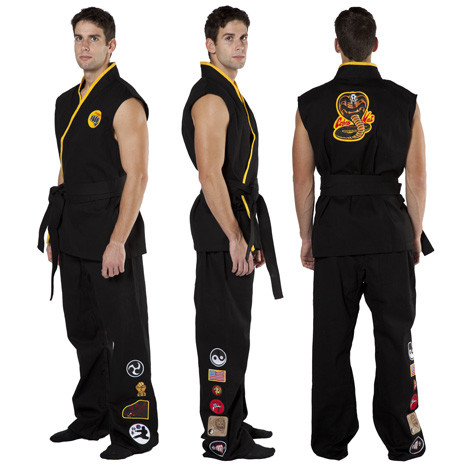 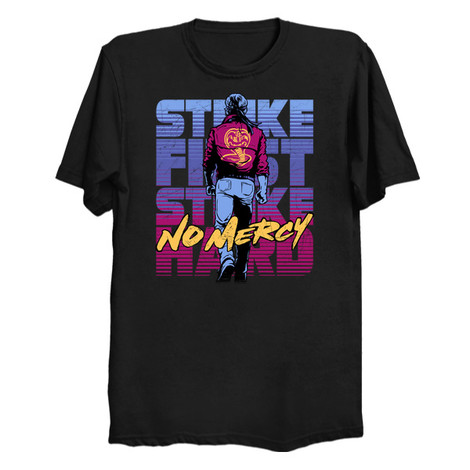 BUY
No Mercy Johnny Lawrence t-shirt
Description: A newer favorite from our Karate Kid t-shirts selection, the Johnny No Mercy Cobra Kai tee lets everyone know that Mr. Miyagi's teaching was no match for your skills. It proves that instructing Daniel to "wax on, wax off" when polishing his classic car was pretty much a waste of time. Mr. Miyagi may seem like an innocent old man, but he has experienced many things worse than John Creese (Martin Kove). Utter your favorite Karate Kid movie quote in this shirt that shows that you can take a crane kick or two. Link to: No Mercy Johnny Lawrence 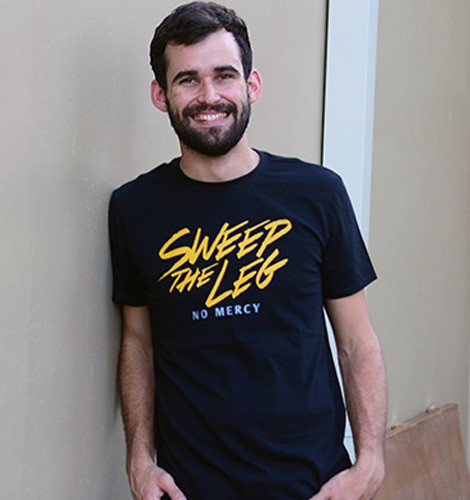 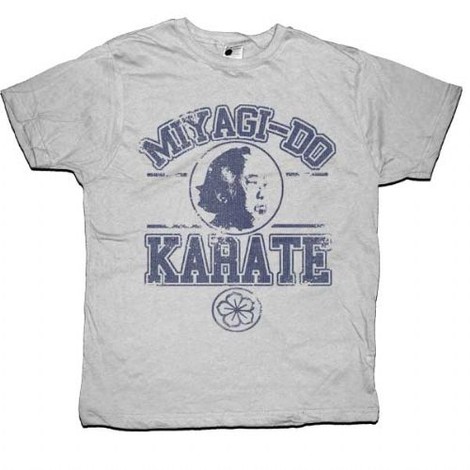 BUY
Miyagi-Do Karate Kid t-shirts
Description: Daniel LaRusso himself actor Ralph Macchio holds up the Miyagi-Do tee that features a logo for Mr. Miyagi's dojo. Sure, it isn't as big as the Cobra Kai dojo, but we think the instructor is far superior to John Kreese (Martin Kove). Pair it with the Cobra Kai t-shirts that read, 'Bow to Your Sensei!' and represent both the good guys and the bad. Miyagi-Do is a little more friendly and does not have mottos like, 'Fear does not exist in the dojo!' This vintage Karate Kid t-shirt is available in five different sizes. Link to: Miyagi-Do Karate Kid 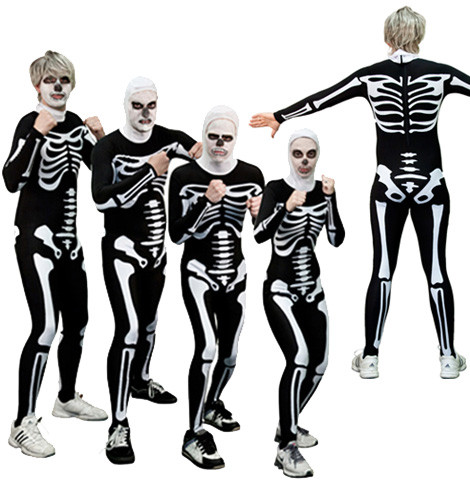 BUY
Karate Kid Skeleton Costume Cobra Kai
Description: Gather a group of friends and go to your next Halloween party in these high quality replica Cobra Kai skeleton costumes. The spandex bodysuits were constructed using the same process that the filmmakers used on the set. The bones, which are made from the same spandex material as the suit, are sewn on by hand to ensure that each piece of the skeleton is in its proper place. Unlike lower quality Karate Kid Halloween skeleton costumes, the bones cover the front and back of the bodysuit and are able to stretch with the outfit. Link to: Karate Kid Skeleton Costume Cobra Kai 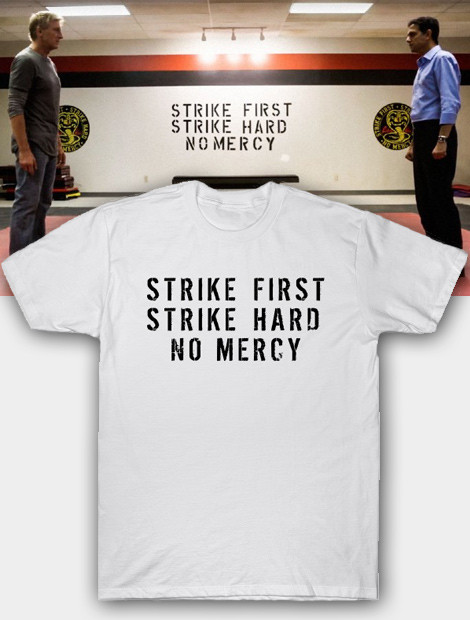 BUY
Cobra Kai Strike First Strike Hard No Mercy
Description: The design on this Karate Kid tee displays the Cobra Kai motto - strike first, strike hard, no mercy. Johnny was taught this by his sensei John Kreese and Daniel was taught a different motto. Remember from the Karate Kid movie, "Man who catch fly with chopstick accomplish anything," though we're not sure Daniel could still pull that off. The ancient Chinese proverb (from 1984) helped Daniel LaRusso (Ralph Macchio) to face his fears and become a champion. These Karate Kid t-shirts feature the motto taught to Johnny Lawrence. Support the ways of Cobra Kai. Link to: Cobra Kai Strike First Strike Hard No Mercy 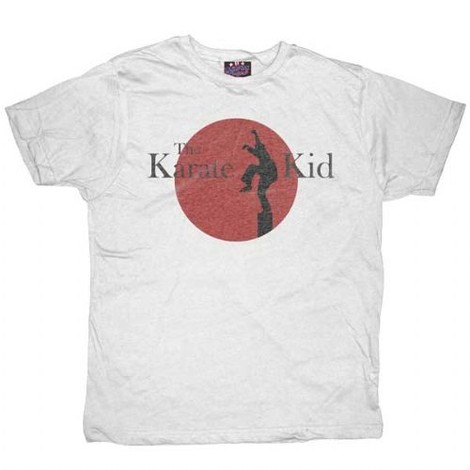 BUY
Karate Kid Movie Logo shirt
Description: This vintage tan tee features a distressed style Karate Kid movie logo on the front. On this official logo, we see a silhouette of Daniel in the crane kick position with the rising sun behind him. This is a bestselling Karate Kid t-shirt, as its connection to the movie is unmistakable. The 100% cotton tee is great for any fan of the 80's movie. Put it on and practice your crane kicks. Link to: Karate Kid Movie Logo 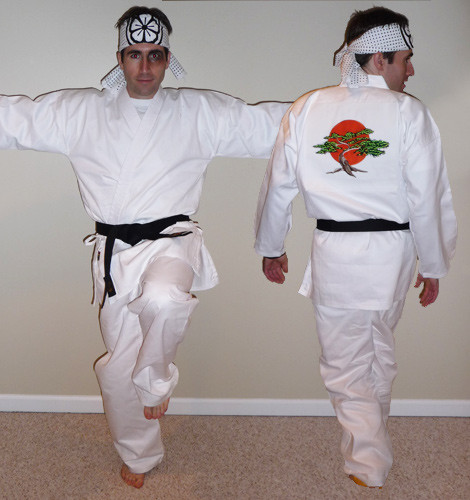 BUY
Karate Kid Costume Gi
Description: This official Daniel LaRusso Karate Kid costume gi is your outfit for the All Valley Karate Tournament. The gi was designed by studying screenshots from the movie that showed the original outfit's detail from various angles. In the movie, Mr. Miyagi makes Daniel the gi for his birthday. As in the film, the bonsai logo is embroidered on the back of the gi. This outfit makes a perfect Halloween costume and it is especially useful when you are being bullied by a rival dojo's karate students. Link to: Karate Kid Costume Gi 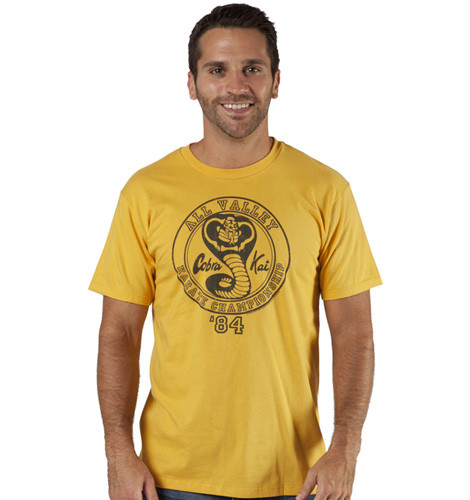 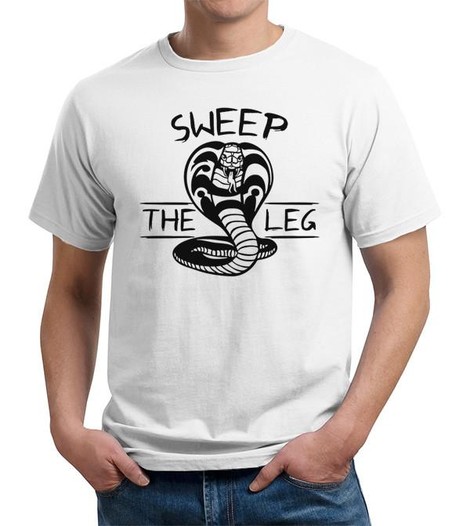 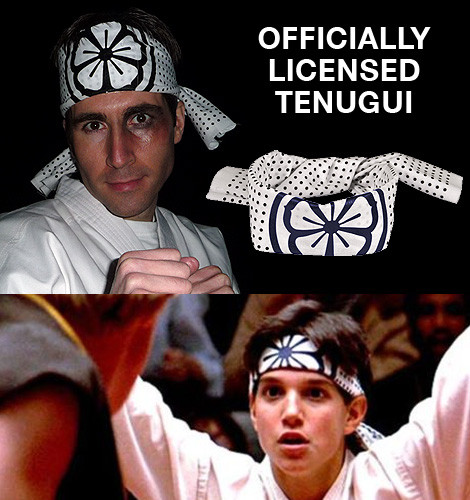