CSI: Crime Scene Investigation (a.k.a. CSI or CSI Las Vegas) is a CBS TV show that centers its storylines around a fictional Las Vegas crime lab, headed by lab supervisor Gil Grissom (William Petersen). The CSI TV show spawned two successful spin-offs, CSI Miami and CSI New York. Here, you can pretend you are part of Gil Grissom's team with our selection of CSI t-shirts. The clothing below includes the basic CSI Las Vegas t-shirt and hats, in addition to an official looking CSI Miami t-shirt. Process your next crime scene in a CSI costume, which is perfect for Halloween parties. Comfortable CSI sweatshirts are also available featuring many of the designs from the CSI apparel and merchandise shown below. Browse through each item to see all available clothing styles.
To buy a T-Shirt, click the image or link for store and size information. 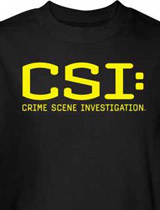 Whether you want to represent one of your favorite CSI television shows or your own hometown, you can do so with this popular costume tee. Instead of a CSI Miami t-shirt, express your forensic love in your own favorite city. Pretend you are a part of CSI Chicago, Boston, Seattle, Philadelphia, Houston, Honolulu, Denver, Portland, etc. These CSI t-shirts look great as part of a costume and are perfect for a night spent watching Gil Grissom, Horatio Caine, or Mac Taylor. CSI hats and sweatshirts are also available. Link to: CSI Costume 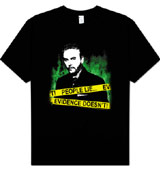 Solve the crime in this cool Gil Grissom CSI Las Vegas t-shirt that features the Grissom quote, "People lie, evidence doesn't." The front of this dark CSI t-shirt displays a silhouette image of William Petersen's character, who will always be a fan favorite. This CSI clothing item is perfect for fans of the television show who are looking for a Gil Grissom merchandise item. Link to: CSI Gil Grissom 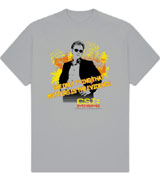 The yellow, orange and black design on the front of this tee features Miami's most popular crime scene investigator, Horatio Cane (David Caruso). Overtop of the silhouette of the character is the quote, "The only thing that matters is the evidence," and the logo for the TV show that makes crime scene investigation glamorous. This piece of CSI apparel is a great gift for any fan of the TV series, especially if you often find them practicing their chalk outlines. Link to: CSI Miami Horatio 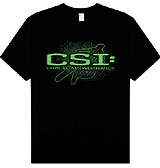 These officially licensed dark CSI t-shirts feature a large version of the TV show's logo printed in green ink on the front chest. Behind the CSI: Crime Scene Investigation logo, is a sketchy outline of a body. This classic CSI Las Vegas t-shirt is a must have for fans of the hit television show. The tee is made of 100% cotton, which will provide the necessary comfort needed to work a crime scene. Link to: CSI Logo 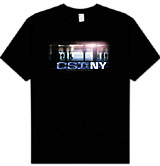 Four years after the original TV show premiered, CSI New York became the second spin-off drama to carry the Crime Scene Investigation title. This time around, actor Gary Sinese takes the helm as Detective Mac Taylor, a widowed scientist and former marine. The front of this CSI t-shirt displays a logo for the New York series. Watch Mac run his team of forensic investigators by the book. Link to: CSI: NY 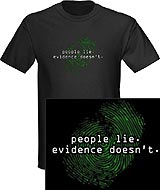 In the CSI Las Vegas episode "Crate n' Burial" from season one, supervisor Gil Grissom (William Petersen) offered a memorable quote, "I tend not to believe people. People lie. The evidence doesn't lie." This Gil Grissom quote went on to become one of the main themes of the TV show; always trust the evidence. This CSI Las Vegas t-shirt is available in a variety of colors and styles. Wear it with a CSI hat. Link to: People Lie. Evidence Doesn't. 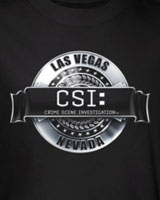 The badge CSI t-shirts shown on the left represent the forensic crime scene investigators of Las Vegas, who were originally supervised by Gil Grissom. The CSI Las Vegas tee on the left features a banner style badge design that reads, "Las Vegas Crime Scene Investigation" on the front. Pair it with a CSI Miami t-shirt to represent both sides of the country. The designs on these CSI clothing items are available on a variety of apparel styles and can be worn under similar sweatshirts and long sleeve Ts. Link to: CSI Badge 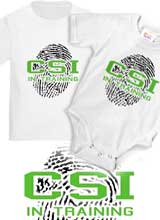 Teach your kids how to conduct a crime scene investigation, and dress them in one of these kids CSI in Training tees while they're learning. Let them each play the role of a CSI character, like Nick Stokes or Sara Sidle, while you pretend that you are supervisor Gil Grissom, Horatio Caine, or Mac Taylor. This design is also available as a CSI onesie, which will look great on your very own baby Grissom. Browse the item to see the adult tee styles, CSI sweatshirts, hats, and boxer shorts. Link to: CSI in Training Adult, Onesies, and Kids 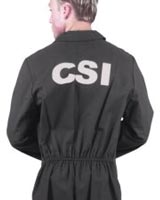 Process the scene at your next Halloween party in one of these official looking CSI costumes. Pretend you're Nick Stokes in one of these blue or black jumpsuits, or live out your fantasies with one of the seductive women's CSI costumes. For a fun his/her theme, dress your significant other in a matching costume. If you get pulled over on the way to the party, tell the police officer that you're in a hurry to make it to a crime scene before rigor sets in. If the officer doesn't buy it, tell him you know Grissom. Link to: CSI Costumes 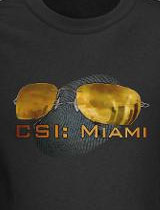 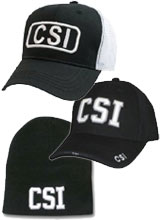 These Crime Scene Investigation hats are perfect for costumes or just to let everyone know that you're ready to work the case, whether it be a dead bug or a missing stuffed animal. Choose from a variety of options, including the laid back trucker hat or the CSI beanie that is ideal for working outdoor crime scenes in the winter. The caps will keep the sun out of your eyes as you're collecting evidence or dusting for fingerprints. Link to: CSI Hats