Developed by George Lucas during the 1970s, Star Wars quickly became a global sensation, spawning two sequels and a prequel trilogy, which altogether have earned around $4.3 billion. The success of the movies gave birth to a world of Star Wars merchandise, including action figures, novels, comics, trading cards, over 120 video games, and a never-ending assortment of Star Wars clothes. Here, we focus on the best Star Wars t-shirts available today, including the bestselling Dark Side Darth Vader t-shirt and the Abuse the Force Star Wars t-shirt. The attractive tees are complemented by other Star Wars clothing items and merchandise. This includes Darth Vader costumes, Star Wars lightsaber replicas and action figures.
To buy a T-Shirt, click the image or link for store and size information. 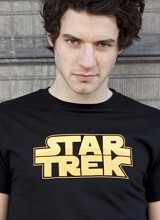 This Star Wars tee might read "Star Trek," but it can be easily seen that you prefer lightsabers to phasers. Wear it to watch the Empire Strikes Back Star Wars movie or any in the franchise, including The Force Awakens. Don't worry, Obi-Wan Kenobi and Luke Skywalker could take down Kirk and Spock in a fight, no problem. Pair it with the original Star Wars logo design below. The next time you choose between the Dark Side and the Force, do it in this rockin' Trek Wars tee underneath a Star Wars sweatshirt hoodie. Link to: Trek Wars 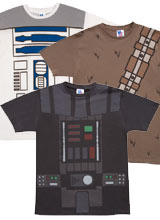 This selection of Star Wars clothes showcases a variety of costume tees that will instantly make you look like you're from a galaxy far, far away. This includes Darth Vader, R2-D2 and Chewbacca costume tees similar to those on the left. The Darth Vader costume tee features a print of Vader's suit from the waist to the neck. The Chewbacca design lets you transform yourself into a wookie in no time at all. Order one of these unique and comfortable costume Star Wars t-shirts today. Link to: Darth Vader Costume and Star Wars Costume 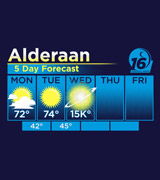 Instead of a Darth Vader t-shirt, why not opt for this humorous Alderaan Forecast design. We know that Vader would get a kick out of it anyway. This cool tee features a five-day forecast for the planet, with things heating up a bit from the first Death Star's superlaser. This piece of Star Wars clothing will remind others that hot weather isn't always good. Rule the galaxy in this Star Wars t-shirt that makes a great gift for any fan with a funny bone. Link to: Star Wars Alderaan Forecast 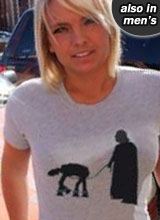 Star Wars At At Walker t-shirt

This Star Wars tee features Darth Vader walking an At At. He is literally an At At walker. Purchase it with Star Wars movie costumes and other Star Wars merchandise. Browse movie action figures and replica Star Wars lightsabers. Pair them with this Star Wars shirt for the perfect gift. Relive the George Lucas adventures and journey to a galaxy far, far away as the characters do in films like Star Wars Episode V: The Empire Strikes Back. Dress as Luke Skywalker, Princess Leia or breath heavy in Darth Vader's mask. Wear this tee under Star Wars sweatshirts and costume hoodies. Link to: Star Wars At At Walker 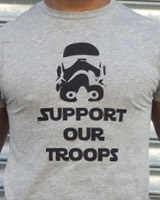 This creative design shows your support for the troops. The design is referring to Stormtroopers, the Galactic Empire's faceless elite soldiers whose strong-arm tactics kept the star systems in line. It's perfect for an aspiring soldier of the Empire, or for an evening spent hanging out at Echo Base on Hoth or in Cloud City with Lando Calrissian. These Support the Stormtroopers Star Wars t-shirts are great for Vader fans or those who favor the Dark Side. It's the perfect addition to your collection of Star Wars clothes and apparel. Link to: Support the Troops 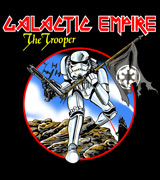 Inspired by the cover art for the Iron Maiden song “The Trooper,” this design will let everyone know that you rock the Dark Side. Show some love for Emperor Palpatine's most ruthless enforcer and his light speeder gang in this Galactic Maiden shirt. Embrace the Dark Side by pairing it with a Darth Vader t-shirt. Get this Star Wars clothing item today. Link to: Galactic Empire - The Trooper 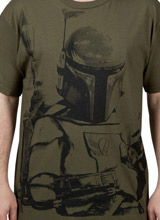 Wear this Boba Fett Star Wars t-shirt that features everyone's favorite interstellar bounty hunter. Wear it alone or under a Star Wars hoodie sweatshirt for a galactic ensemble. Also see the Boba Fett costume from the movie, which is available through the costumes link in our gallery. Embrace the persona of the galaxy's most notorious bounty hunter. Boba Fett was hired by Darth Vader to track down the Millennium Falcon, which he eventually tracks to Cloud City where Vader captures Han Solo and Princess Leia. Purchase this Star Wars merchandise item with a Darth Vader costume. Link to: Boba Fett 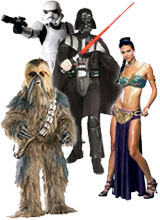 Browse a selection of Star Wars costumes that range from classic characters like Darth Vader, Princess Leia, Yoda, Chewbacca, Han Solo and Storm Troopers to newer character outfits like Jango Fett, Queen Amidala and Clone Wars costumes. Get noticed in the Jabba the Hutt outfit or lurk in the shadows in the Jawa disguise. Add a replica lightsaber to truly light up your costume. Options vary in price depending on the quality of the galactic disguise that you choose. Link to: Star Wars Chewbacca Costume, Storm Trooper and Darth Vader Costumes 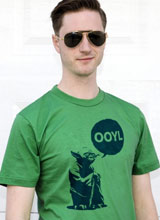 Yoda Only Once You Live t-shirt

Harness the power of the force and live for every moment in this Yoda Star Wars tee that displays a Yoda-style play on the popular phrase YOLO (You Only Live Once). Remember that when the Dark Side encourages you to lift one too many beers to your mouth, or to use your lightsaber to chop down your neighbor's tree. Just be careful you don't end up on a one way journey to the Dark Side. Remember, live like Anakin, don't overindulge like Vader. These YOLO Yoda Star Wars t-shirts display the abbreviated phrase, "Only Once You Live". Link to: Yoda Only Once You Live 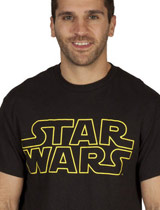 This design displays the classic Star Wars movie logo that is recognized by fans across the galaxy and beyond. Whether you desire to become a Jedi or part of the Dark Side, this design is the perfect way to show that you are a fan of the popular franchise. Add this classic logo tee shirt to your selection of Star Wars clothes as a way to represent the movies that introduced us to the Dark Side. This design is also available on Star Wars sweatshirts and hoodies. Wear it the next time that you have dinner with your father Darth Vader. Link to: Star Wars Logo 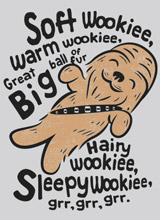 Let your friends sing you the Soft Wookiee song when you are sick. The design parodies Sheldon's Soft Kitty song from The Big Bang Theory. Pair it with A New Hope Star Wars t-shirt for the movie that introduced us to Luke Skywalker, Princess Leia, Hans Solo, and of course, Chewbacca. The groundbreaking movie utilized revolutionary special effects. This unique piece of Star Wars clothing is ideal for the Wookiee-loving Dark Lord in your life. Pair it with a Darth Vader t-shirt for the ultimate Galactic Empire combo. Wear it under a Star Wars hoodie or sweatshirt, only to reveal it when you wield your light saber. Put it on under Star Wars costumes. Link to: Soft Wookiee 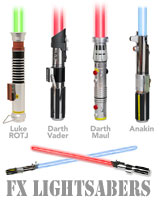 Although this description refers to the FX light up lightsabers with realistic power-up/power-down effects accompanied by an assortment of authentic sounds, be sure to also browse related items such as lightsaber pens, flashlights, lamps, chopsticks and more. The motion sensor controlled lightsabers pictured here are the perfect gifts for fans who desire realistic looking replicas that turn on and off in a similar manner to what is seen in the movies. Link to: Replica Star Wars Lightsabers - Darth Maul, Darth Vader Lightsaber 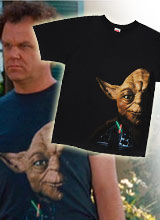 The design on this dark colored Star Wars tee features Yoda on the front and the Episode VI: Return of the Jedi movie logo on the back. It gained in popularity when it was worn by John C. Reilly on the big screen opposite Will Ferrell in the movie Step Brothers. This bestselling piece of Star Wars merchandise is a fitting tribute to the venerable Yoda from the George Lucas movies. We can't guarantee that your Yoda impersonations will improve, but you'll at least look good attempting to quote the wise Jedi master. Link to: Yoda 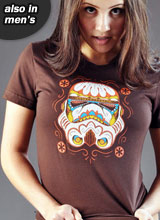 These cool Star Wars t-shirts feature a Stormtrooper sugar skull. In Spanish cultures, sugar skulls are used to celebrate the dead and are created by decorating skulls made of clay and molded sugar. Here, the Imperial Forces celebrate the Stormtroopers who have given their lives to defend the Empire. The unique design on the front of this Star Wars shirt offers a creative ode to the George Lucas franchise. Add this apparel item to your diverse assortment of Star Wars clothes. Link to: Sugar Skull Stormtrooper 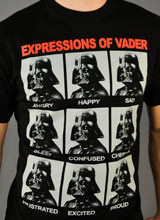 The police report stated that a member of the Dark Side held up a local convenience store. The masked suspect was caught on the surveillance camera wielding a red light saber and looking angry. The police notified local Jedi authorities after the suspect's heavy breathing revealed his true identity. The images on this Star Wars t-shirt reveal the many similar expressions of the suspect, Darth Vader, the most feared crime boss in the Star Wars universe. Wear this bestselling clothing item under a Star Wars sweatshirt hoodie. Link to: Star Wars Expressions of Vader 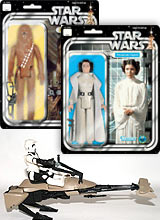 A long time ago, in a local toy store that is likely now gone, original Star Wars figures lined the shelves for fans to purchase. The release of these now coveted toys not only gave fans and collectors a way to connect with the movie and its characters, it also marked the beginning of a merchandise juggernaut. Here, you can locate original Star Wars figures which encompass the original trilogy and were released between 1977 and 1989. Link to: Vintage Star Wars Action Figures and Original Toys