My Name is Earl t-shirt Gallery

Star Jason Lee originally passed on the NBC My Name is Earl TV show twice before finally agreeing to join the cast, filling the title role of petty crook Earl Hickey. The plot revolves around Earl's desire to turn his life around after being hit by a car. His newfound faith in karma inspires him to make a list of wrongs to make right. Help Earl Hickey's karma flourish by purchasing My Name is Earl shirts and merchandise, including Crabman tees and the My Name is Earl Karma t-shirt. Celebrate each episode in style with a piece of NBC Earl TV merchandise.
To buy a T-Shirt, click the image or link for store and size information. 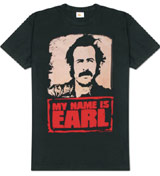 My Name is Earl Logo t-shirt

The front of this dark tee displays a silhouette of Earl J. Hickey (Jason Lee) positioned above the NBC My Name is Earl TV show logo. Fans will easily recognize Earl's trademark moustache and disheveled hair. Earl possesses a somewhat faulty understanding of karma, which ultimately drives his life. He acquires this outlook after hearing about the concept of karma during an episode of Last Call with Carson Daly. It inspires him to change his ways. Link to: My Name is Earl Logo 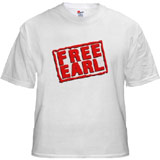 In the finale episode of My Name is Earl Season 2, Earl goes to jail for a crime that he didn't commit. Earl's family and friends band together in an effort to rally support for his release from prison. In the tradition of the "We Are the World" music video from the 1980s, Earl's friends make a Free Earl video. He ended up in prison after taking the fall for Joy. Link to: Free Earl 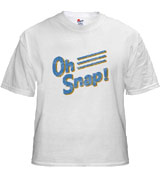 The NBC My Name is Earl t-shirt on the left displays the popular Joy Turner quote, "Oh Snap!" from the TV series. Pair it with an Earl logo design tee. The TV show's main character, Earl Hickey, believes that if he does good things, then good things will happen to him. He embraces this idea as he is lying in a hospital bed after being hit by a car, which is when he loses a $100,000 lottery ticket. He believes Karma will bring it back to him. Link to: Joy Oh Snap 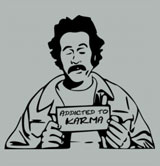 My Name is Earl Karma tee

These My Name is Earl shirts display Earl Hickey holding up a sign that reads, "Addicted to Karma". Earl (Jason Lee) takes the fall for his ex-wife, Joy Turner (Jaime Pressly), in the 2007 season finale episode. Earl's selfless act lands him in prison in the "Karma State." Joy is now married to Earl's friend Darnell "The Crabman" who works at a local dive called Ernie's Crab Shack. Wear this tee with a My Name is Earl hat. Link to: My Name is Earl Karma 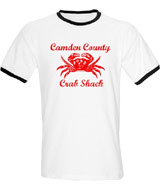 The Crab Shack is a popular Camden County restaurant and bar where Earl, Joy and Randy hang out. Their friend Darnell (a.k.a. the Crabman) works there, and he often hooks them up with "bowls full of stuff that he's not legally allowed to put in the crab cakes." Darnell and Joy eventually marry. Earl remains friends with Darnell, most likely due to the fact that Joy tricked Earl into marrying her anyway. Pair this with a My Name is Earl Crabman t-shirt and tell everyone you work at Ernie's Crab Shack. Link to: Camden County Crab Shack 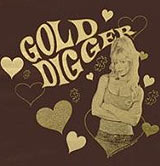 Joy Turner (Jaime Pressly) is Earl's ex-wife. She is self-centered and manipulative, not to mention the definition of "trailer trash." This doesn't stop her from being downright hilarious. For example, just before Joy is about to give birth naturally in a large tub of water, she tells the nurse to get a fishing pole with some baby food on the end in case the baby doesn't want to come out. This tee labels her a gold digger. Link to: Gold Digger Joy 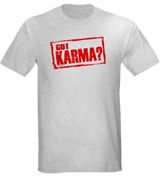 These humorous My Name is Earl t-shirts display the statement, "Got karma?" Earl hears about the concept of karma while recovering in a hospital bed after being hit by a car, and he decides to undo all of the bad deeds from his past. Right past wrongs by making your own to do list. Earl Hickey creates his famous to do list in the first My Name is Earl episode from season one. These tees let everyone know that you've "got karma". Link to: Got Karma? 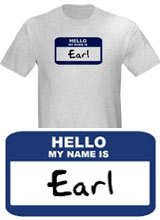 The blue design on the front of this piece of My Name is Earl merchandise displays a name tag for the TV show's main character, Earl Hickey. This My Name is Earl name tag t-shirt offers a unique and humorous twist on the familiar logo from the TV series. The best thing about this name tag is that it will never fall off the tee. This bestselling apparel item is a great gift for fans of the show, even if that person's name is not Earl. Whether you're going to watch reruns on TBS, or My Name is Earl NBC episodes on DVD, this is the perfect attire in which to enjoy the entire cast. Link to: Hello My Name Is Earl Name Tag 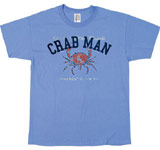 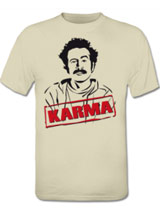 The design on this tee features an image of Jason Lee's character Earl Hickey standing behind the word "karma". The design is reminiscent of the My Name is Earl series logo. Whether you rock an Earl-like moustache, or you're just an avid watcher of the show, this piece of merchandise will let your friends know that you believe in Karma. Earl discovers Karma while he's watching the Carson Daly Show. Carson Daly says, "Do good things, and good things happen to you. Do bad things and it'll come back to haunt you." Carson attributes his success to the idea of Karma. Link to: Earl Karma 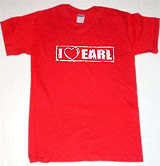 Available in red or black, the design on the front of this My Name is Earl t-shirt helps to express your admiration for Earl Hickey. Whether you share his belief in what goes around comes around, or you simply never miss an episode of the TV show, this I Love Earl tee will help to convey your devotion. Tell your friends that you know the Crab Man and that you can get free snacks at Ernie's Crab Shack. Link to: I Love Earl