The Ultimate Fighting Championship (UFC) originated in the early 1990s with violent pay-per-view matches that were touted as no holds barred mixed martial arts (MMA) events. After political pressure almost completely eclipsed the sport from public view, the UFC reformed itself by adopting stricter rules, which made it more socially acceptable. Here, we celebrate the MMA sport with a selection of UFC shirts and MMA apparel. Browse our bestselling Tapout clothing, including the latest Tapout t-shirt designs and hoodie sweatshirts. Keep an eye out for more UFC clothing, including UFC hats, Tapout shorts and more MMA merchandise.
To buy a T-Shirt, click the image or link for store and size information. 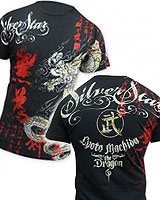 The UFC's trademarked "Octagon" has become the league's most recognizable component. The fenced in canvas battleground is a place where the UFC's ultimate fighters are both crowned and destroyed. Celebrate the Octagon with this official Machida Silver Star UFC t-shirt that displays the Silver Star UFC logo on the front. The league's full title is "Ultimate Fighting Championship" and it consists of clothing brands like Silver Star. Wear it to cheer on Lyoto Machida at the next match you attend. Link to: UFC Silver Star 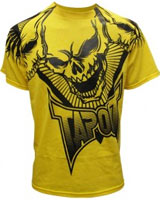 One of the most popular pieces of Tapout apparel available, this yellow Tapout tee features the brand name near the center with an angry skull displayed above the Tapout logo. Like nearly all of the brand's apparel, this Tapout shirt is a reflection of the extravagant creativity of Tapout's founder, Mask. The back of the tee features a nearly identical but smaller version of the Tapout logo that is displayed on the front. Browse through to see this and all of the available Tapout clothing. Link to: TapouT 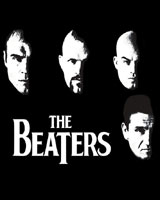 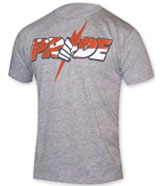 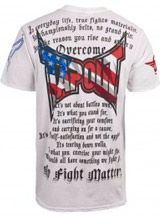 The unique design on the front of this piece of Tapout clothing includes the Tapout logo with an American flag behind it. The flag is the perfect way to show off your patriotic side. The design on this Tapout t-shirt is surrounded by positive words encouraging others to face challenges head on. The Tapout logo combined with the flag's red, white and blue is a winning combination. The TapouT crew travels across the country in a tricked out tour bus in search of the next MMA superstar. Add this to your collection of Tapout clothes. Link to: TapouT USA 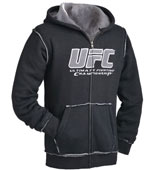 The UFC sweatshirt hoodie on the left features a raised grey and white UFC logo stitched on the front, along with a grey cotton-Sherpa lining and stylish contrast stitch piping. The comfortable black hooded sweatshirt is perfect to warm up in before a workout, or to lie around the house in on a chilly afternoon. Add this hoodie to your collection of MMA and UFC apparel. Wear it with MMA fight shorts. Link to: UFC Logo Sweatshirts and Hoodies 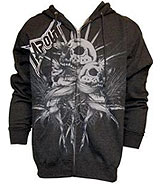 Submit to a stylish Tapout hoodie that features the clothing company's logo. The item on the left features grey skulls on the front. A regular or zip-up sweatshirt is great for both MMA fight fans and participants. Wear it overtop of your favorite UFC shirt. Official Tapout apparel is available in several product lines. The company's influence runs deep among fans, with some going as far as to tattoo the company's logo onto their bodies. Link to: TapouT Hoodies 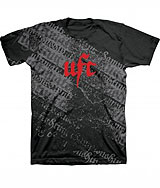 Whether you root for Georges St-Pierre, Chuck Liddell or Anderson "The Spider" Silva, this design might inspire you to become a UFC champion too. The front of this UFC tee features a red Ultimate Fighting Championship logo. The full name of the organization represented by the logo covers most of the front in the background. This UFC clothing item is official MMA apparel that celebrates your favorite fighters, including Rich Franklin, Chuck Liddell, Forrest Griffin and Randy Couture. Link to: UFC Logo 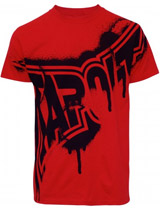 The front of this red Tapout shirt displays a black graffiti style Tapout logo. The classic design was brought back due to demand from fans. The backs of these Tapout t-shirts display a traditional white logo at the top center. This official Tapout clothing item is manufactured in the USA and is made of a soft 30s cotton. Match it with a pair of Tapout shorts. Link to: TapouT Felony 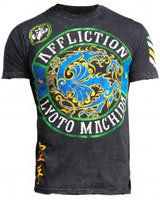 Enter the Octagon in a bestselling official Affliction UFC t-shirt. Choose from an array of attractive designs that incorporate the Affliction UFC logo and other elements. The letters UFC stand for "Ultimate Fighting Championship", the largest mixed martial arts organization in the world. This tee will help you to win the "best dressed" title when you enter the UFC Octagon. If only that was all you had to worry about. Wear this UFC apparel item to your next main event underneath a comfy UFC sweatshirt for a killer combo. Link to: UFC Affliction 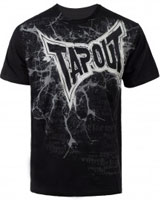 The front of this dark Tapout tee displays a cracked cement design with the brand's logo printed across the chest. Old style text appears behind the entire design on this Tapout t-shirt. The tee's attention grabbing design is not for the faint of heart. Wear it to intimidate your challengers, or while watching the next pay-per-view. This piece of Tapout apparel is also enough to inspire you to train harder. It looks great with a pair of MMA fight shorts, or a stylish UFC or Tapout hat. Link to: TapouT Breakthrough 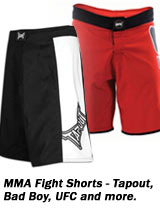 The black Tapout shorts on the left are made with a two-way flex material with Tapout Shield Technology that helps to eliminate odors and bacteria. The 100% polyester MMA shorts feature a strategically placed MP3 pocket and a Velcro brand fastener with an internal draw-cord. The fight shorts will look great with your favorite Tapout and UFC shirts. Wear them with related UFC hats and Tapout sweatshirt hoodies to look like a true Ultimate Fighter. Link to: TapouT and UFC Fight Shorts 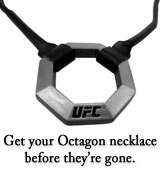 One of the all time bestselling pieces of MMA merchandise, this UFC necklace features an Octagon shaped pendant with a leather style strap. The stylish piece of jewelry was worn by fighters on The Ultimate Fighter reality TV show. Now you can sport this highly sought after Octagon pendant while they're still available. Link to: UFC Octagon Necklace