The Laguna Beach MTV TV series was the first pseudo-reality TV show to air on mainstream television. Structured as a traditional narrative, the Laguna Beach TV show unfolds more like a soap opera than a full-fledged reality TV series. The show, officially titled Laguna Beach: The Real Orange County, was created to chronicle the overly dramatic lives of a group of young people who attend the local high school. "The Real Orange County" was added to the title to play on the success of FOX's series The O.C. Here, we display a gallery of fashionable Laguna Beach t-shirts, including the popular MTV Lifeguard Laguna Beach t-shirt.
To buy a T-Shirt, click the image or link for store and size information. 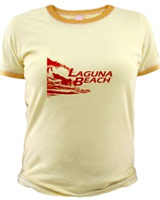 Soak in the summer sun in this popular wave logo MTV Laguna Beach tee. The red design includes a silhouette of a crashing wave to the left of the TV show's title. This Laguna Beach clothing item is perfect for anyone who can relate to the show's main characters, including Lauren Conrad (LC). Lauren watches as her best guy "friend," Stephen Colletti, tries to win back his ex-girlfriend, Kristin Cavallari. Stephen turns to LC for support while Kristin is off hooking up with other guys, including Talan Torriero. Link to: Laguna Beach Wave Logo 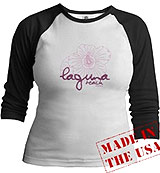 This stylish purple design includes the outline of a flower blooming above the title of the show, which is printed in cursive font. The design is available on over 120 items, including t-shirts, tank tops, and sweatshirts (a black-sleeved Jr. Raglan is pictured on the left). The tropical look of the design is perfect for a cool summer night at the beach, or a casual day spent wading in the surf as you listen to the MTV Laguna Beach Soundtrack CD. Link to: Laguna Beach Flower Logo 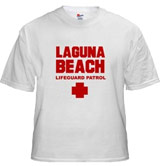 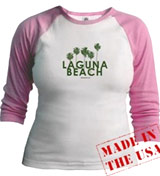 Represent the real OC in this Laguna Beach palm tree tee that displays the TV series name in front of a set of green palm trees. It's perfect for a day spent shopping at the beach, as you search for the perfect pair of sunglasses to wear while checking out Stephen Colletti as he waxes his longboard. Just make sure that he doesn't notice you staring at him. This design is available on a variety of MTV Laguna Beach t-shirts and apparel items. Link to: Laguna Beach Palm Tree 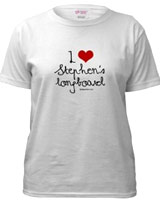 The front of this clothing item reads, "I Love Stephen's longboard," with the word "Love" replaced by a red heart. The provocative statement serves as an obvious double entendre, with the word "longboard" having two possible meanings. On one hand, it may be referring to Stephen Colletti's actual surfboard. On the other hand, well... you can probably guess the second not-so-PG meaning. This shirt is perfect for fans who are obsessed with Stephen from the MTV Laguna Beach TV series. Link to: I Love Stephen's Longboard 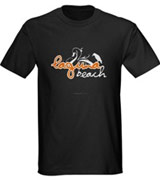 The orange and white Laguna Beach logo looks sharp against the black fabric of the tee. Perfect for both guys and girls, the design features a white bird-like silhouette behind the show's name. Another smaller bird rests on the letter 'a' at the end of the word "Laguna." This tee is perfect for a beach bonfire with friends, or a casual stroll in the sand with your significant other. The design is equally attractive on a navy MTV Laguna Beach t-shirt. Link to: Laguna Beach Orange Logo 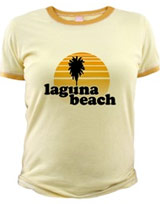 After a long day under the bright blue skies and hovering seagulls, stroll back to your beach house in this sunset themed MTV Laguna Beach tee. A black palm tree sits in the foreground as the sun sets behind the TV show's title, which is printed in bold black lettering. Who knows, you might run into Stephen or Talan on your way. Let's just hope that Kristin Cavallari is not with either of them. Then again, you can always be Stephen's LC, and provide him with a shoulder to lean on, especially when Kristin repeatedly breaks his heart. Link to: Laguna Beach Sunset 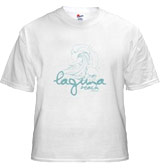 The fronts of these MTV Laguna Beach t-shirts display a light blue design that includes a cresting wave above the title of the TV series. The refreshing design captures the excitement of the beach, while at the same time maintaining its own youthful style. It's perfect for a day spent shopping on the boardwalk, or rollerblading to the music of the MTV Laguna Beach Soundtrack. Link to: Blue Wave Laguna Beach 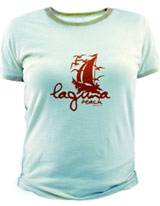 Enjoy the warm summer breezes in this Laguna Beach tee shirt that features a red silhouette of a sailboat, positioned above the TV show's name. Seagulls can be seen gliding around the mast and sails of the boat. This clothing item is perfect to wear overtop of your bathing suit while you enjoy an afternoon on the water. Keep an eye out for Stephen Colletti and Talan Torriero, who can usually be seen surfing near the shore. Just be careful not to sail your boat over Stephen's longboard. He's very protective of his equipment. Link to: Laguna Sailboat Logo 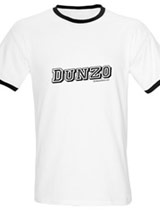 The front of this MTV Laguna Beach t-shirt displays the word "Dunzo" across the chest. Dunzo is a common term used in Laguna Beach and other areas of Orange County, California. It is a slang word meaning done/finished. After Kristin Cavallari's car overheats, she exclaims, "My car is so dunzo!" Stephen Colletti uses the term when he talks about he and Kristin's impending break-up, "Kristin and I are dunzo," says Stephen, referring to the fact that his romance with Kristin is over. Purchase this tee to show you're down with the lingo of the OC. Link to: Laguna Beach Dunzo 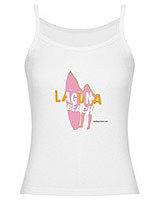 Let everyone know that you like to ride the waves in this Laguna Beach tank top (also available in tees). The design on the front displays a female silhouette next to a surfboard. The title of the TV series appears overtop in orange and white letters. Show Stephen and Talan that you're more than just an Orange County girl who's only interested in fashion and flirting. These MTV Laguna Beach t-shirts and tank tops are perfect for a day spent waxing your surfboard or painting your toenails. Link to: Women's Laguna Beach Surf 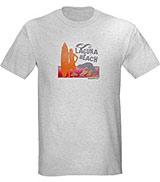 Grab your longboard and head to the beach in this Laguna Beach surf tee. The design features a grey wave crashing toward an orange silhouette of a surfer holding his board. Wear this t-shirt for a friendly game of beach volleyball, or an afternoon of kite flying over the shore as you listen to the MTV Laguna Beach Soundtrack. If you run into Kristin Cavallari, tell her that Stephen said he is dunzo and ready to move on. Link to: Laguna Beach Surf