Pirates of the Caribbean t-shirts

In the summer of 2003, the popular Pirates of the Caribbean Disney ride sailed onto the big screen and gave birth to one of the most successful movie franchises in history. Audiences fell in love with the swashbuckling characters, especially the drunken pirate Jack Sparrow, portrayed by Johnny Depp, who at the time was starring in the biggest mainstream film role of his career. Depp's unique approach to his character (he modeled Jack Sparrow's mannerisms after those of a drunken rock star) won over audiences worldwide. The movie, which also stars Orlando Bloom as blacksmith Will Turner and Keira Knightley as his love interest Elizabeth Swann, spawned three sequels, 2006's Dead Man's Chest, 2007's At World's End and 2011's On Stranger Tides. Browse a selection of potc t-shirts, costumes, masks and movie items, such as Pirates of the Caribbean bedding.
To buy a T-Shirt, click the image or link for store and size information. 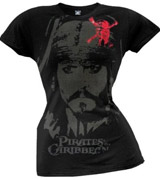 Take to the high seas in this officially licensed Pirates of the Caribbean t-shirt that features an image of Johnny Depp as Jack Sparrow, who in the movie teams up with Orlando Bloom as Will Turner. A shimmering red skull spices up the design on the front. Great for Johnny Depp fans and lovers of the POTC movies, this black T is the perfect fit for the adventurous swashbuckler in your family. Just don't name your car the Black Pearl. Link to: Jack Sparrow 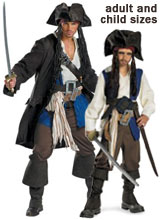 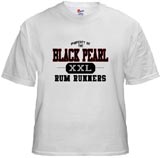 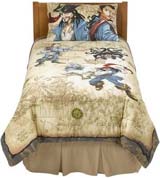 Pirates of the Caribbean Bedding

This fun Pirates of the Caribbean bedding will have your kids dreaming of high sea adventures alongside Captain Jack Sparrow. Purchase either the 100% cotton comforter or the twin bed POTC sheet set, which both feature animated pirate images featuring the movie's characters. The sheet set includes 1 flat sheet, 1 fitted sheet and 1 pillowcase. The stylish tan POTC bedding looks great in any room. Link to: Pirates of the Caribbean Bedding 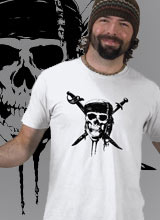 This design displays the highly recognizable Pirates of the Caribbean movie logo. This Skull and Swords tee is perfect for fans of both the POTC movie and the iconic Disney theme park ride. The classic logo is available on various forms of apparel, including sweatshirts and tank tops. It's okay to talk like a pirate with this shirt on because everyone will know that you're a fan of swashbuckling action and adventure. Various color Ts are also available. The skull and swords logo can also be found on mugs and glasses. Link to: Pirates of the Caribbean Skull Logo 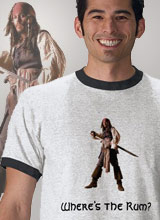 Available in a variety of styles, this Jack Sparrow shirt is perfect for rum weary gentlmen or for ladies eager to board the captain's ship to polish his Black Pearl. Set sail in this ringer tee, which features a real life color image of Jack Sparrow (Johnny Depp) with the movie quote, "Where's the Rum?" displayed beneath him. One of the bestselling kids', men's and women's Pirates of the Caribbean t-shirts, it is an excellent choice for any Sparrow fan. Just remember to take it off to wash the rum stains out of it. Change the text to your name or a different quote. Link to: Captain Jack Sparrow 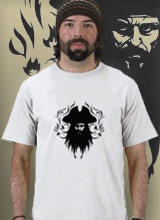 Also available on a kids' t-shirt, ringer, baseball jersey or hoodie, the Pirates Blackbeard tee is a great way to show your preference for pirate living. The tee features a dark vector design of Edward Teach, more famously known as the pirate Blackbeard. In the movie On Stranger Tides he captains his ship, Queen Anne's Revenge, in search of the Fountain of Youth. This design, which emphasizes his heavy black beard and hat, is also available in kids' styles or on mugs, steins and mouse pads. Click the shirt on the left to browse the available products. Link to: Blackbeard 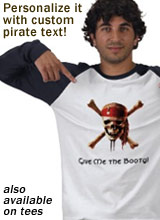 This iconic skull and crossbones logo t-shirt instantly conjures up memories of Johnny Depp's Jack Sparrow character, Orlando Bloom's Will Turner and even the Undead Monkey. Show that you're a fan of all the movies in the series with these Skull and Crossbones Pirates of the Caribbean shirts that are sure to help get you the booty. Just tell them that you're the first mate of Captain Jack Sparrow. Personalize the text in the design with your name, a memorable movie quote or your own funny pirate phrase. Give me the booty! Link to: POTC Skull and Crossbones 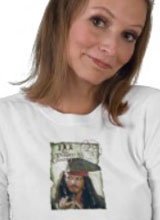 This Johnny Depp t-shirt features Depp's face as the lucidly bumbling Captain Jack Sparrow. The movie title appears at the top of this Jack Sparrow shirt. This stylish tee is a great gift for swashbuckler loving ladies, who want their nearest pirate to reveal to them his buried treasure. The design is available in many styles for men, women and children. Link to: Johnny Depp Pirates of the Caribbean 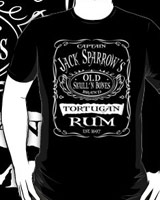 This tee will have everyone enviously asking, "When did you go to the Black Pearl Distilleries?" Available on multiple colors, the front of the T features a logo for Captain Jack Sparrow's Tortugan Rum. Now you can own one of these rare Pirates of the Caribbean t-shirts that are great for adult fans of the movie. The design reveals that the Captain's rum is part of the old Skull and Bones brand, which was established in 1697. Link to: Jack Sparrow Rum 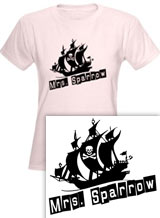