The NBC Scrubs TV show debuted in 2001 as a situation comedy centered around the life of Dr. John 'J.D.' Dorian (Zach Braff) and several of his fellow employees at Sacred Heart, a teaching hospital. Personal and professional relationships are explored, with insight and off-the-wall thoughts presented in each Scrubs episode as daydreams of the characters, mainly of Zach Braff's J.D. Dorian. Here, we offer a selection of Scrubs t-shirts featuring designs that relate to memorable events in the Scrubs TV Series. Tees include the popular x-ray logo Scrubs t-shirt and the funny Vanilla Bear Zach Braff t-shirt. Browse through for related merchandise, including official NBC Scrubs pants, hats and mugs.
To buy a T-Shirt, click the image or link for store and size information. 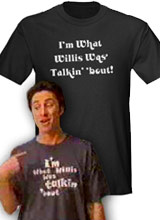 Get your frick on in this NBC Scrubs tee that displays the phrase "I'm what Willis was talkin' 'bout." Wear it as you sing along with the Scrubs theme song sequence that ends with the Scrubs x-ray logo. During Zach Braff's DVD commentary for the episode "My Last Chance," the actor reveals that the x-ray was unintentionally hung backwards. The TV shows creators tried to fix their mistake in Scrubs season 2, but fans and NBC execs liked the backwards x-ray. They convinced the creators to allow the error. Buy it with an NBC Scrubs hat. Link to: I'm What Willis Was Talkin' 'bout 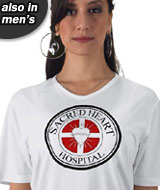 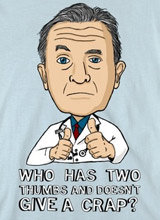 The front of this funny Scrubs shirt features Dr. Bob Kelso's famous quote from the TV show. Dr. Kelso (Ken Jenkins) is Sacred Heart's Chief of Medicine, a cold, heartless individual, who cares more about the hospital's bottom line rather than the well-being of the patients. When a fellow doctor tells him that she has a secret, Bob replies, "Who has two thumbs, a funny voice, and still doesn't give a crap?" Pointing his two thumbs back at himself, he answers in a clown-like voice, "Bob Kelso." Link to: Who Has Two Thumbs and Doesn't Give a Crap Bob Kelso 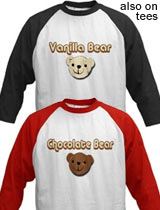 J.D. (Zach Braff) and Dr. Christopher Turk (Donald Faison) are best friends and former roommates. Turk is a surgical attending physician at Sacred Heart Hospital. Like ebony and ivory, chocolate bear (Turk) and vanilla bear (J.D.) are practically inseparable. They even finish each other's sentences, which frustrates Turk's significant other, Carla, who jealously states, "Maybe one day he'll love me like that." These chocolate bear and vanilla bear Scrubs t-shirts are funny homages to J.D. and Turk. Link to: Vanilla Bear and Chocolate Bear Scrubs 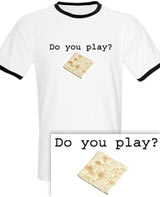 Do you play? (Find the Saltine)

The Find the Saltine Scrubs t-shirt on the left celebrates the game that Zach Braff's Scrubs character, Dr. John Dorian, plays with his fellow physicians, most notably his best friend Dr. Christopher Turk (Donald Faison). The object of the game is to hide a saltine cracker somewhere on your body, and then have a participant try to "find the saltine." For example, in one Scrubs TV series episode, Dr. John Dorian hides the saltine behind his ear and Dr. Turk guesses the location correctly. Link to: Do you play? (Find the Saltine) 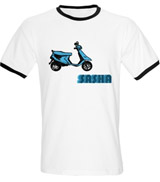 Available in a variety of styles, this tee looks great with shorts, jeans, or a pair of official NBC Scrubs hospital pants. Relax on the couch as you watch your favorite Scrubs TV show episodes, including the ones featuring Sasha, JD's scooter that has been in more than a few mishaps. For example, Sasha ended up in the middle of a robbery and was shot full of bullets. This design is perfect for fans of Sasha the scooter from the Scrubs television show. Link to: Scrubs Sasha 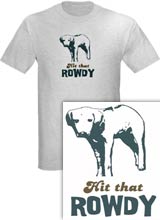 This Scrubs Zach Braff t-shirt features an image of J.D.'s stuffed dog Rowdy, along with a paraphrase of Dr. Turk's funny Scrubs quote, "Yeah Rowdy, hit that," which he says when he sees J.D. pretending that the dog is humping his leg. In various Scrubs episodes, Rowdy is humorously mistreated by those who see him as nothing more than a dead dog. Turk's girlfriend Carla eventually surprises J.D. and Turk with a nearly identical stuffed friend for Rowdy, whose name is Steven. Carla tells J.D. and Turk that this way "at least you can both have one." Link to: Hit that Rowdy Scrubs 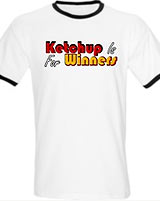 Scrubs Ketchup is for Winners t-shirt

These Scrubs t-shirts commemorate the funny scene where Sacred Heart Hospital attorney Ted Buckland tries to snatch the ketchup bottle from Dr. Kelso's cafeteria table. Dr. Kelso quickly exclaims, "Ketchup is for winners, Ted." Realizing he doesn't fall into this category, Ted (Sam Lloyd) quickly hands the ketchup bottle back to the humorously cold-hearted Dr. Kelso (Ken Jenkins). This shirt is perfect for both ketchup lovers and fans of the NBC Scrubs TV series. Available in a variety of styles. Link to: Scrubs Ketchup is for Winners 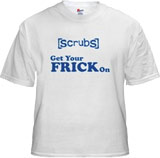 Get Your Frick On Scrubs t-shirt

Frick is a word used by the Scrubs TV show characters to express immediate frustration, or it is used as a term of insult usually directed at another person. It is closely related to the more derogatory four-letter f-word, although the two are not always interchangeable. The front of this Scrubs t-shirt features the Scrubs logo with the expression, "Get Your Frick On" printed underneath it. Link to: Get Your Frick On Scrubs 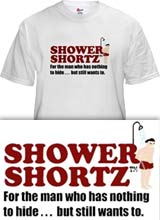 As Zach Braff explains to Dr. Cox (John C. McGinley) during a Scrubs episode, wearing shower shorts is nothing to be embarrassed about. The front of this funny Scrubs Zach Braff t-shirt promotes the fictional Shower Shortz brand apparel, with a logo that includes a cartoon-like image of a man (J.D.) showering in a pair of red Shower Shortz. Beneath the logo is Zach Braff's Scrubs quote, "For the man who has nothing to hide... but still wants to." Shower shorts are the coolest, whether you wear them while showering in a hospital locker room, or after a long workout at your local health club. Link to: Scrubs Shower Shortz 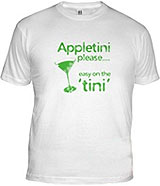 Appletini please... easy on the 'tini'

The appletini is Zach Braff's Scrubs character's favorite drink. He considers it a straight-guy drink, despite its obvious feminine drink characteristics. In a memorable Scrubs episode guest starring Keri Russell as Melody O'Harra, J.D. is forced to pay for his Appletini with a one hundred dollar bill. He hesitates at first, claiming that the drink was light on the 'tini'. This Scrubs tee shirt features a distressed green design that displays an image of an appletini. Link to: Appletini please... easy on the 'tini' 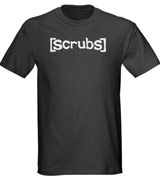 The popular tee on the left features the logo for the NBC Scrubs TV show. The logo is displayed on the front of the shirt across the chest. This design can be purchased on both men's and women's style apparel in a variety of colors. These Scrubs t-shirts are the perfect gift for anyone who's a fan of the TV series. Browse through to see this Scrubs logo design on hoodie sweatshirts, long sleeve jerseys, ringer Ts, tank tops, hats and mugs. Link to: Scrubs Logo