The superhero Spider-Man was first introduced to comic book readers in Amazing Fantasy #15 (August 1962). Spidey became an instant hit with teenage readers mainly because he was one of them, a teenager beset by woes, money problems, rejection, loneliness, and feelings of inadequacy. Here, we celebrate the amazing Spider-Man with a gallery of Spider-Man t-shirts, clothing, and costumes. Tees include the Spider-Man Venom t-shirt and the logo Amazing Spider-Man Oscorp tee. Other Spider-Man clothes include Spider-Man hoodies, Venom sweatshirts, and Spidey hats. The comic also marked the first appearance of The Punisher.
To buy a T-Shirt, click the image or link for store and size information. 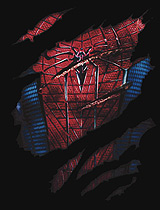 This piece of Spider-Man clothing displays a chest tear that reveals the costume of Marvel's most famous superhero. Perhaps the damage done to this Amazing Spider-Man t-shirt happened during one of his battles with the Green Goblin or The Lizard. Yet again, maybe he was doing some mud wrestling with the Amazing Spider-Pig character from The Simpsons Movie. Whatever the case, this piece of Spider-Man clothing is the perfect way to subtly reveal your inner web slinging superhero. Link to: Spider-Man Chest Tear 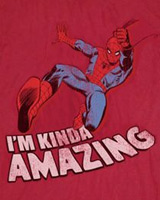 The eye-catching look of this bestselling Amazing Spider-Man tee shirt is a great way to express your fandom for the retro side of the web-slinging superhero. Whether you're a fan of the early Spider-Man comic books, or Spidey apparel in general, this tee is the perfect way to satisfy your appetite for each. Wear it underneath a comfy Spider-Man sweatshirt. Link to: I'm Kinda Amazing Spider-Man 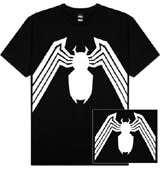 Venom is a symbiote alien life form that bonds to a host, usually a human, in order to survive. The symbiote gives the host enhanced powers, creating a super-villain. This dual life form is also referred to by the name Venom. These Spider-Man t-shirts display a white Venom logo. Celebrate the comic book character who can send his enemies running just by showing his sharp teeth and long tongue. Link to: Spider-Man Venom Logo 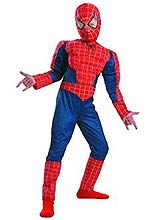 Help your kids live out their dreams of being their favorite superhero, Spidey! These red and blue kids Spider-Man costumes feature a muscle chest and a hood with mesh eye inserts. The outfit's ease of motion will have your child climbing the walls, slinging webs, and playing for hours. This Spidey product is an official Spider-Man 3 merchandise item. The design is loosely based on Tobey Maguire's Spidey outfit from the live-action movies. See below for the black Spider-Man costume, another popular choice. Link to: Spider-Man Costumes

Pair this attractive Amazing Spider-Man tee with a Spider-Man Venom t-shirt that displays the dark Spidey logo for the symbiote supervillain. This way you'll be able to express both your happy and darker sides. In the movie Spider-Man 3, Venom bonds with host Eddie Brock (Topher Grace), a journalist who held a grudge against Spidey. Add this to your collection of Spider-Man clothes. Link to: The Amazing Spider-Man 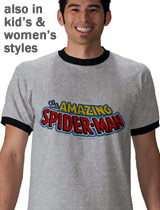 This bestselling Spider-Man tee shirt is an officially licensed product of Marvel Comics. The classic style Spidey tee displays the comic book logo "The Amazing Spider-Man". This was Spidey's first solo title. The comic book, created by Stan Lee, debuted in March 1963, and it is widely known as Spider-Man's flagship series, with most major events in the Spidey storyline happening within its pages. The Spider-Man t-shirt on the left is also available in other styles, all perfect to wear under a Spider-Man hoodie. Link to: Marvel Amazing Spider-Man Logo 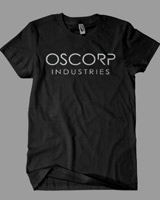 This Spider-Man clothing item displays the logo of Oscorp Industries, the company founded by Norman Osborn (The Green Goblin). This Oscorp t-shirt might help to get you into the building. Wear the tee under a Venom Spider-Man sweatshirt featuring the Venom Spider-Man logo. A hoodie is the perfect way to conceal Peter Parker's identity. Pair it with the Spider-Man Venom shirt below for the ultimate superhero clothing combination. Web slinging ability not guaranteed. Link to: Spider-Man Oscorp Industries 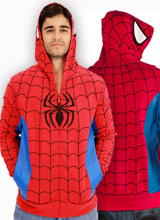 This Spider-Man costume hoodie is the ideal piece of clothing to wear over one of your Marvel Spider-Man t-shirts on a chilly day. It's an easy but highly effective disguise for fans of Spidey who are looking for slightly warmer clothing. The costume sweatshirt is designed to look like the Spider-Man costume created by Peter Parker. The hood displays part of the head of his mask, with two white spider-like eyes. Become the Amazing Spider-Man in this Marvel Comics Spider-Man hoodie that will complement your favorite tee. Wear this piece of Spidey apparel for a day spent web slinging. Link to: Spider-Man Costume Hoodie 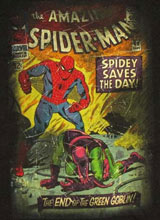 The Spidey t-shirt on the left is an excellent addition to any collection of Spider-Man clothes. The front of the tee displays the cover art featured on The Amazing Spider-Man comic book issue #40 (1966). The artwork reveals that Spider-Man saves the day by defeating the Green Goblin. Created by Marvel and Stan Lee, this issue follows issue #39 where the web slinger behind the costume, Peter Parker, is revealed to the Green Goblin, who then reveals his true identity to Parker. Pair it with Venom clothing. Link to: Spider-Man and Green Goblin 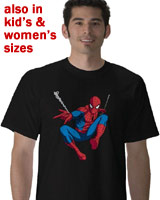 The front of this funny Spider-Man t-shirt displays an exciting design that features Spidey swinging through the air in his red and blue Spider-Man costume. The super swinger is holding onto a web behind him. His red and blue outfit has the opposite meaning as his black costume, which is a symbol of looming immoral behavior, brought on by a possible Venom-ous infection. Is Spidey swinging his way to Mary Jane? Wear this web slinging Spidey tee underneath your favorite Venom Spider-Man hoodie. Link to: Web Slinging Spider-Man 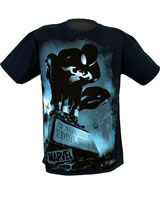 This unique piece of Spider-Man clothing displays Spidey sitting atop Venom's grave (or sepulcher). On the front of the tombstone is the name Eddie Brock, Venom's true identity. Peter feels guilty after the horrid looking beast with a snake-like tongue and an appetite for human flesh dies of an illness. Let's just hope the beast doesn't return hungry for Spidey's girlfriend Mary Jane Watson, or his kind Aunt May. Wear this Spider-Man Venom t-shirt underneath a comfortable Spidey hoodie. Link to: Spider-Man Venom 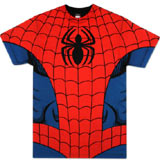 The Spider-Man costume t-shirt on the left is an officially licensed Marvel product that can help to bring your dreams of being a web slinger to life. The red, blue, and black design covers the tee, displaying the torso of the superhero's costume. The familiar black Spidey symbol is visible on the chest, overtop a black web-like design. Add this to your collection of Spider-Man t-shirts and clothes. Link to: Spider-Man Costume 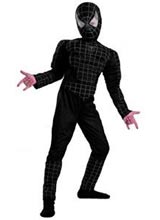 Bring the dark side of Spidey to life in this silver and black costume featuring a jumpsuit with muscle torso and over the head character hood with reflective mesh eye inserts and web print. The black Spider-Man costume is based on Spidey's black outfit from the movie Spider-Man 3. In the film, the symbiote alien Venom bonds to Spidey, temporarily distorting his ordinarily good intentions. Wear this costume with your favorite Venom Spider-Man tee shirt underneath. Just remember to retain your superhero (good guy) ways. Link to: Black Spider-Man Costume 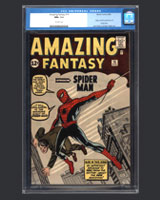 Browse auction listings for one of the most coveted comics of all time, the first appearance of Spider-Man. The August 1962 Amazing Fantasy comic book introduced the world to the web slinger who lives daily life as a shy, unassuming teenager. The success of the issue launched The Amazing Spider-Man comic book series, which gave kids a hero who they could relate to. Link to: Amazing Fantasy #15 Comic Book (1962) First Appearance of Spider-Man