The Vampire Diaries TV show is a CW series based on The Vampire Diaries books by L. J. Smith. Viewers follow the life of Mystic Falls teenager Elena Gilbert (Nina Dobrev) after she loses both of her parents in a car accident. Soon, she finds comfort in Stefan Salvatore (Paul Wesley), a good vampire, but she is torn when his evil brother Damon (Ian Somerhalder) arrives in town. If this crazy romance has you hooked, peruse our gallery of The Vampire Diaries t-shirts including the Team Stefan shirt, Love Sucks tee and Team Damon t-shirt. Don't just watch the show; read it too with the new L.J. Smith books available below.
To buy a T-Shirt, click the image or link for store and size information. 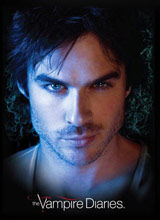 While Elena Gilbert may not be everyone's ideal girl, the Salvatore brothers think she is perfect. Why you ask? She reminds them of a former flame from the 1860's that they both loved when they were human, Katherine Pierce. A vampire herself, the question of whether she is still alive eludes them. They believed she was one of the vampires killed in the Fell's Church fire during the Battle of Willow Creek but a possible sighting a century later leaves the theory open ended. Both vampires like Elena, one good and one evil, but who will win this girl's heart? Grab this Vampire Diaries shirt if your choice is Damon. Link to: Vampire Diaries Damon Logo 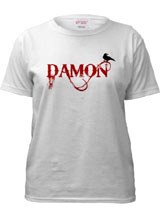 In case you haven't heard, "love sucks". At least that's what the tagline for the CW Vampire Diaries series tells us. However, these Damon Salvatore Vampire Diaries t-shirts don't suck one bite, especially when paired with the Love Sucks t-shirt below. Both are available in a variety of colors and styles for men and women, so choose your vampire clothing wisely. Also, be sure to check out The Vampire Diaries Team Damon t-shirt below and The Vampire Diaries books by L. J. Smith, including The Awakening and The Struggle. The show has inspired new books too. Link to: Damon Crow 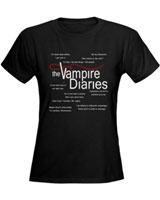 Let the vampires know that you're a fan with this Vampire Diaries tee featuring quotes from Elena and the two brothers. While providing Elena with a few pieces of vervain jewelry to protect herself, her friends, and her family from Damon, Stefan informs her that "as long as it is in you or on you a vampire cannot control you". This means that you can also eat or drink the substance for safety. He later utilizes this knowledge to poison Damon by giving the tea to Caroline before he attacks her. Get a Cast Moon or Protected by Vervain tee or see other clothes like the Mystic Falls t-shirt below. Link to: Vampire Diaries Quotes 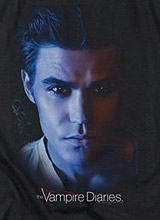 Do you fall for the good guy or the bad guy? I'm guessing the good guy since you are checking out this Team Stefan t-shirt. As viewers and readers know, Stefan Salvatore is a vampire that has decided that killing humans doesn't have a place in his life. He has chosen to thrive on animal blood instead. He is drawn to local teen Elena Gilbert because of her striking resemblance to a past love, and she seems spellbound by him. If this sounds like your dream love, then get this Vampire Diaries tee. The good guy doesn't need to finish last. Link to: Team Stefan 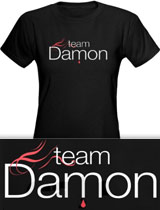 You must be the girl who loves the bad guys, right? If that's the case then you have come to the right place. This Team Damon t-shirt celebrates Stefan's evil vampire brother. Damon has decided that the lifestyle suits him just fine. In fact, he loves it. Unlike his brother, Damon is not willing to give up hunting humans or the powers that go along with it. With a grudge against his brother haunting the relationship, the two try to find their places in Elena's life. If this bad boy gets your blood flowing, snag this Vampire Diaries t-shirt or a Damon Salvatore poster today. Link to: Team Damon 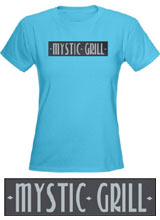 In small towns like Mystic Falls, there isn't very much for teenagers to do. Rather than be bored, some of them take jobs and one place they work is the Mystic Grill restaurant. For example, before Stefan burns vampire Ben McKittrick to death, Ben works there as the bartender. In addition to Ben, Vicki Donovan waitresses there until she is staked through the heart. However, not everyone that works there becomes a vampire and is killed by Stefan. Vicki's brother, Matt Donovan, is still very much alive and human. If you wish the Mystic Grill was your local hot spot, then eat up this Mystic Grill t-shirt. Link to: Mystic Grill 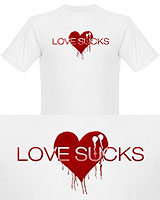 This is another Love Sucks t-shirt option for your purchasing pleasure. The design features fang marks puncturing a heart and making it bleed, with the tagline "love sucks". It is available in different colors and styles so you can pick what fits your personality. If you prefer designs featuring the cast, check out some of our other Vampire Diaries tees. Something is bound to fit your specifications. Be sure to check out the L. J. Smith books and The Vampire Diaries clothing below too. Link to: Love Sucks Heart 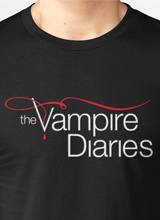 Unlike The Vampire Diaries books and CW TV show, these Vampire Diaries t-shirts are simple and to the point. If you prefer Matt Donovan (Zach Roerig), Bonnie Bennett (Katerina Graham) or Jeremy Gilbert (Steven McQueen) to the Salvatore brothers, this tee might just be what you were looking for. It has no specific references to characters, and it features the show's logo on the front. If you can't get over the vampire duo, check out the Team Stefan shirt and the Team Damon shirt above. Any of our Vampire Diaries tees would be a great surprise for the fan in your life. Link to: Vampire Diaries Logo 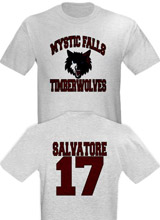 While many of you may have already picked a Team Damon t-shirt or a Team Stefan t-shirt, some of you are probably still having trouble choosing one. Let this Mystic Falls Timberwolves design be another option for a Stefan Vampire Diaries tee. Between the two Salvatore brothers, he's the one that you can trust. Unlike his brother Damon, he has chosen to live off animals instead of humans. It's the perfect present for fans of Stefan. You might even want to pair it off with other clothes and Vampire Diaries posters to create the perfect combo that your fan will swoon for. Link to: Vampire Diaries Timberwolves 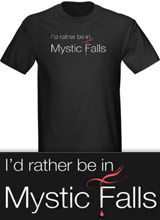 I'd Rather Be in Mystic Falls t-shirt

This Mystic Falls t-shirt design reads, "I'd rather be in Mystic Falls." The falls are symbolic like the crow is in the books or on the TV show. In the books, Damon can transform into the crow because of his vampire powers. However, on the show the crow is simply Damon's pet that he can control through his thoughts. This Vampire Diaries shirt is available in many styles and colors for men and women, so pick one for yourself and your friend. Check out the new Vampire Diaries books by L. J. Smith available below as well. You won't regret it! Link to: I'd Rather Be in Mystic Falls 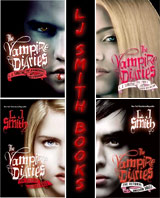 Get the new L.J. Smith Vampire Diaries books for yourself or the fan that you know. It's a novel idea that truly bites, which is not a bad thing. Despite some people assuming that another certain vampire book series was written first (now a popular movie series), author L.J. Smith actually released the first four Vampire Diaries novels in the early 1990s. They included The Awakening, The Struggle, The Fury and Dark Reunion. In 2009, L.J. Smith continued the story with the trilogy The Return. Link to: Vampire Diaries Books by L. J. Smith