Populated with an entirely non-human cast, the Disney Pixar Cars movie is a computer animated film that cruised into theaters in 2006, with the sequel Cars 2 following in 2011. The story revolves around Lightning McQueen, an anthromorphic red racecar who inadvertently ends up in the rundown town of Radiator Springs. Forced to do community service after accidentally tearing up a town road, McQueen encounters other talking vehicles, the most popular of which are featured on these Disney Cars Movie t-shirts. Head to the finish line in a Lightning McQueen t-shirt or tear up the highway in a Tow Mater shirt or a Cars 2 movie tee.
To buy a T-Shirt, click the image or link for store and size information. 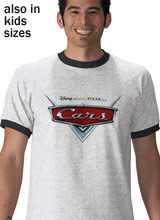 Perfect for both adults and kids, this Disney Pixar Cars movie logo shirt displays the hood emblem style graphic displayed on the movie posters, DVDs and various merchandise related to the Pixar film. If a ringer T is not your style, select from a variety of other apparel options including plain white movie logo tees, long sleeves, American Apparel and sweatshirts. This highly recognizable design is the perfect choice regardless of whether your favorite character is McQueen, Nitroade, Snot Rod, Doc Hudson or Sally Carrera. Link to: Disney Cars Logo 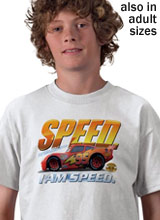 This pedal to the metal design features the Lightning McQueen quote, "Speed. I am speed." This Disney Cars t-shirt is available in sizes for both kids and adults. In order to mentally prepare himself for the race, Lightning utters the quote at the beginning of the movie just prior to the start of the Piston Cup. The race ultimately ended in a three-way tie that resulted in a tiebreaker race being scheduled for a week later. Let everyone know that you like to go fast by wearing this cool design that will have you repeating the McQueen quote, "Speed. I am speed." Link to: Lightning McQueen 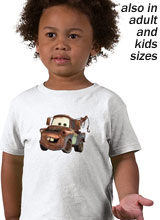 The popularity of Pixar's Tow Mater character has not only landed him on the front of Pixar Cars t-shirts like this one, it has also made him the main protagonist in spin-off media such as video games, the Cars Toons series and 2011's Cars 2 Pixar film. Voiced by comedian Larry the Cable Guy, Tow Mater is a rusty old tow truck that was inspired by the 1951 International Harvester tow truck. Yet, other attributes make him more similar to a 1955-57 Chevrolet or GMC. In any case, fans know Mater best as Lightning McQueen's funny sidekick. Link to: Tow Mater 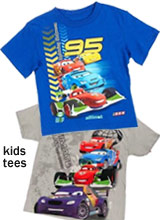 Get in the fast lane with these Disney Pixar Cars 2 shirts. In the movie, we see Lightning McQueen head to Europe and Japan to compete in the World Grand Prix. He faces off against the legendary Francesco Bernoulli and other notable racers. There to support him are his friends from Radiator Springs, including Mater, girlfriend Sally Carrera, Fillmore, Red the Fire Truck, Guido and Luigi. He also makes new acquaintances like Mater's love interest Holley Shiftwell, international spy Finn McMissile and fellow racer Raoul CaRoule. Perfect for Cars 2 movie fans. Link to: Cars 2 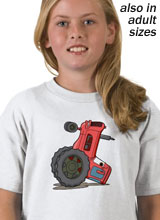 This humorous Tow Mater tractor tipping shirt reveals his idea of a good time. In the movie, Mater takes Lightning McQueen out into a field filled with sleeping tractors. He sneaks up to one of them and blows his horn. Startled, the tractor tips over and Mater busts out laughing. He urges McQueen to give it a try. "I don't even have a horn," Lightning replies skeptically. In an effort to scare the tractors, he decides to rev his engine. The noise is so loud that it scares all of the tractors and causes every one of them to tip over, leaving the two in hysterics. Link to: Mater Tractor Tipping 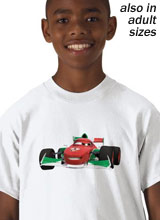 Voiced by John Turturro, Francesco Bernoulli is a Formula 1 racecar with the reputation of being the most famous racecar in Europe. Kids look up to him and ladies are mesmerized by his open wheels. Modesty is not his strong suit, as evidenced by his racing number. The Number 1 Francesco Bernoulli would love the fact that his picture is on this Disney Cars 2 movie t-shirt. In the film, Lightning McQueen's girlfriend Sally Carrera is infatuated with Bernoulli, which makes McQueen jealous. Wear this Francesco Bernoulli shirt to show your admiration. Link to: Francesco Bernoulli Cars 2 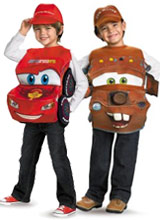 There's no better way to express that you're a fan of the Disney Pixar Cars movies than to become the characters themselves. Here, you'll not only find Lightning McQueen Halloween costumes, but you'll also discover Disney Cars outfits for various other characters. Let your son or daughter reveal their funny side in a Tow Mater costume or allow them to imagine they are a secret agent in the Cars 2 Finn McMissile costume. These movie outfits will allow your child to pretend they are in the Pixar movie. Link to: Disney Cars Costumes, Lightning McQueen Outfits, Tow Mater Costume 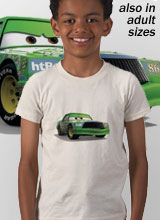 Resembling an 80s' American stock car, the determined racer Chick Hicks will do whatever it takes to win, especially after spending his entire career chasing the taillights of the veteran Strip "The King" Weathers. In the last lap of the tiebreaker race, Hicks rams Strip Weathers, sending him tumbling off the track in a horrific crash. Instead of crossing the finish line, Lightning McQueen stops to wait for the veteran Weathers, allowing Hicks to win the race, only to later be booed by the crowd. Add this Chick Hicks shirt to your Cars clothing items. Link to: Chick Hicks 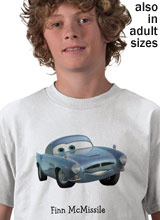 Show off your spy skills in this Finn McMissile Cars 2 t-shirt that displays the British secret agent on the front. Voiced by Michael Caine, the character is a British master spy much like James Bond. He is even equipped with cool weapons and gadgets, including a missile launcher, grappling hook and a roof-deployed holographic disguise emitter. Finn suspects that a conspiracy is unfolding during the World Grand Prix. He recruits Mater to help him, who he mistakes for a cleverly disguised American agent. Disguise yourself in this Cars 2 movie t-shirt. Link to: Finn McMissile 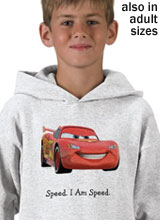 Customize this Disney Cars sweatshirt with your favorite Lightning McQueen catchphrase from the Pixar movie. We've added one of his most popular, but you can customize it with your favorite quote or you can add whatever text you prefer, such as your son's name or the character's name. This Lightning McQueen sweatshirt will keep you warm on cool days riding your bike through Radiator Springs. The design is also available on a Disney Cars t-shirt or on a hoodie like the one shown on the left. Choose the style and color that gets your wheels turning. Link to: Lightning McQueen Hoodie Sweatshirt 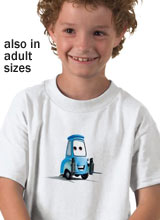 Providing a certain amount of the comic relief in the Cars movie, Guido is a forklift who works with Luigi at Casa Della Tires. The two are also best friends. The forklift Guido dreams of one day working the pit crew for a real racecar. His dream comes true when he works as part of Lightning's pit crew for the tiebreaker race, performing the fastest pit stop in Piston Cup history. This was after Chick Hicks pit crew had made fun of Guido. This Cars t-shirt celebrates the little forklift that could. Pair it with related Pixar Cars shirts to celebrate the movie. Link to: Cars Guido 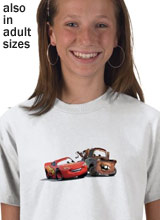 After the Piston Cup, Mack accidentally loses Lightning McQueen on the way to the tiebreaker race. The rookie red racecar ends up in the forgotten town of Radiator Springs. One of Lightning's first acquaintances is a rusty old tow truck who goes by the name of Tow Mater. The two become friends and Mater introduces McQueen to tractor tipping and demonstrates his ability to drive backwards at ultra fast speeds, a skill that Lightning later uses in the tiebreaker race. Support these two BFFs with this McQueen and Mater t-shirt featuring both of them. Link to: Lightning McQueen and Tow Mater 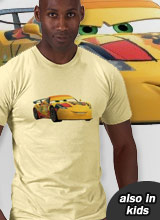 One of the most attractive looking cars at the World Grand Prix, Miguel Camino wears the colors of the Spanish flag, the country that he calls home. This Disney Cars t-shirt features the up-and-coming racer who first grabbed his country's attention by participating in the Running of the Bulldozers and then as a successful toreador in the dozer ring. Devoutly supported by his hometown of Pamplona, Miguel wants to turn a few more headlights at the World Grand Prix. Support the stylish showman with this Miguel Camino shirt that is also in kids' sizes. Link to: Cars 2 Miguel Camino 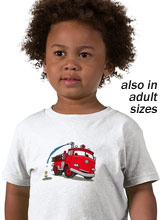 Based on a mid-1960s closed-cab pumper fire truck, Red the Fire Engine handles emergencies that arise in Carburetor County. This t-shirt displays him watering a flower, which is a nod to his passion for gardening. He also spends time shining the statue of Stanley that is outside his fire station. Other than huffs and crying, Red never speaks, a characteristic that can be attributed to his shyness. Pair this Red the Fire Truck tee with other Disney Cars Movie t-shirts for a great gift idea. Your child can even wear this clothing item to water his or her own garden. Link to: Cars Red the Fire Engine 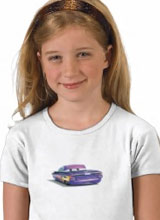 This Disney Pixar Cars Ramone shirt is available in both kids and adult sizes. The front features the trimmed out 1959 Chevrolet Impala Lowrider, complete with the familiar purple paint job and vibrant flames that run down each side. The car is shown with its hydraulics engaged. Voiced by actor Cheech Marin, the character owns Ramone's Paint and Body Art, a vehicle detailing and paint service. To keep his skills sharp while business is slow, Ramone paints himself each morning. Later in the Disney Cars movie, he paints Lightning McQueen. Link to: Cars Ramone 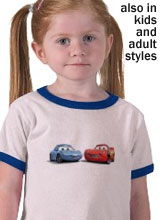 Voiced by Bonnie Hunt, Sally is a royal blue Porsche 911 Carrera. She is Lightning McQueen's love interest and eventual girlfriend in the movie. Lightning and Sally meet when he inadvertently destroys the main road of the town. As the local attorney of Radiator Springs, she convinces the judge, Doc Hudson, to lessen the punishment to community service by way of paving the damaged road. This Cars Lightning and Sally t-shirt displays the adorable couple who are also featured in the sequel. They now operate the Wheel Well Hotel. Link to: Cars Sally Carrera 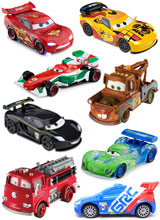