The Marvel comic book character Iron Man, created by the legendary Stan Lee, first appeared in the publication Tales of Suspense in March of 1963. The story surrounds a wealthy inventor named Tony Stark (modeled after Howard Hughes), who after being severely injured and captured by an enemy army, designs a suit of armor to aid in his escape. The blockbuster 2008 Iron Man movie starring Robert Downey Jr. has thrust the metallic hero into the mainstream. Here, we present an attractive selection of Iron Man t-shirts and merchandise. Tees include the popular chest glow (Arc Reactor) Iron Man t-shirt and various licensed Iron Man movie shirts. Other items include Iron Man costumes, masks, comics and party favors.
To buy a T-Shirt, click the image or link for store and size information. 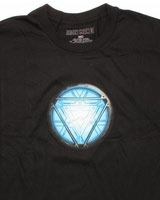 Tell your friends that the glowing Arc Reactor under your shirt is the only thing keeping you alive. The front of this tee features a glowing blue design, created to appear as if Tony Stark's chest magnet is underneath the tee. Be careful not to show too many people the device. People like Obadiah Stane (Jeff Bridges) would do anything for an Arc Reactor. Obadiah needs one to power his Iron Monger suit, which he plans to use to defeat Tony Stark. Link to: Tony Stark Iron Heart 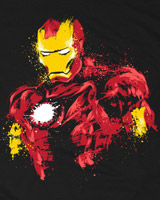 This inked style Avengers Iron Man Marvel t-shirt features an image of the superhero on the front. From his Marvel comic book roots to his big screen battles, this tee is perfect to wear as you experience any of his action-packed adventures. You can also wear it as you fine tune your repulsory units with the help of your robot assistant JARVIS, or put it on to play with your Iron Man action figures and toys collection. Link to: Iron Man Avengers 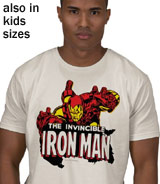 The design on this popular Iron Man merchandise item displays a vintage Invincible Iron Man design. The character's metal red and gold exoskeleton is made of a gold titanium alloy. This contradicts the name Iron Man, which the media in the movie gives to the character. Tony Stark replies that he still likes it anyway, even if the "costume" is not actually made of iron. The design on these vintage Iron Man t-shirts is perfect for fans of the superhero. Link to: Invincible Iron Man 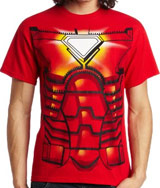 One question that we always get is, "Will this Iron Man costume tee give me superhuman strength and a bulletproof exoskeleton?" Not exactly, but it will let you pretend that you have superhuman strength and a bulletproof gold titanium alloy shell. Think of it as a one of a kind imagination enhancer. This Iron Man t-shirt is ideal for costume parties, Comic-Cons, or watching the Iron Man movie. Link to: Iron Man Costume 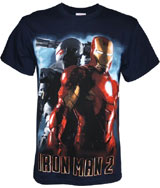 The front of this Marvel Iron Man 2 movie tee displays the movie poster art for the sequel, featuring an image of Tony Stark and War Machine standing back to back. The duo makes the perfect team to take on Whiplash and Justin Hammer. Blue clouds fill the background with the movie logo shown at the bottom. This provides an attractive backdrop for the main character, whose Arc Reactor glows brightly in his chest. Wear this shirt with a great looking party favor Iron Man mask or costume mask. Link to: Iron Man 2 Movie Poster 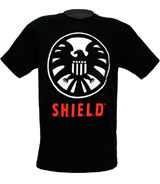 Heroes aren't born, they're built...and then they're drafted by classified organizations like S.H.I.E.L.D., the Strategic Homeland Intervention, Enforcement and Logistics Division. Make waves in this Marvel Iron Man Shield shirt that displays the logo for the group headed by Nick Fury. They attempt to recruit Iron Man after genius inventor Tony Stark creates his costume of intelligent armor as a way to fight those who are using his weapons to carry out evil. Link to: Marvel Iron Man S.H.I.E.L.D.

These graphically rich juvenile Iron Man t-shirts feature the superhero with glow-in-the-dark elements. Wear it to fight Whiplash or the Iron Monger. The man inside the Iron Monger costume is Obadiah Stane (Jeff Bridges), a ruthless rival who tries to take over Stark Industries. Collect Iron Man action figures and toys to continue the battle. Link to: Iron Man Youth 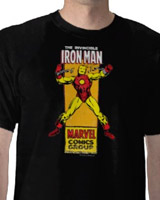 Wear this retro Iron Man design to break the chains that bind you just like Tony Stark breaks free of his captors after fashioning his Mark 1 armor with the help of physicist Ho Yinsen, a fellow prisoner who dies during Iron Man's escape. The Mark 1 armor is nearly destroyed after Tony Stark safely evades his captors and crash lands in a vacant area of the desert. With no time to salvage the Mark 1 costume, he leaves it behind. His former captors eventually discover the armor and the blueprints for its design, which land in the hands of Obadiah Stane. Link to: Iron Man Breaking Chains 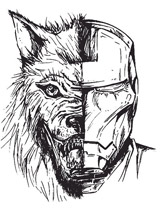 This design is a mash-up of Iron Man and the popular Game of Thrones TV show. This Iron Man t-shirt features the face of Tony Stark from the Iron Man movie next to Jon Snow of House Stark from HBO's Game of Thrones. Perhaps if Jon Snow had the superhero's armor and chest power cell, known as the Arc Reactor, he would be better able to defend the Wall. In any case, this creative design is the next best way to unite the two Starks. Link to: Iron Man Two Starks 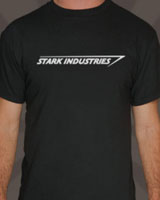 Let everybody know that you're employed by Stark Industries, maker of the best military weapons on the planet. Tony Stark (Robert Downey Jr.) himself travels to Afghanistan to demonstrate his company's latest achievement, the Jericho, a missile that rains down dozens of highly destructible smaller missiles. The result is total annihilation, because as Tony Stark says, "They say the best weapon is one you never have to fire. I respectfully disagree. I prefer the weapon you only need to fire once." Link to: Stark Industries 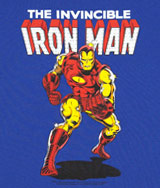 These attractive blue vintage Iron Man t-shirts pay homage to the character's comic book origins. Iron Man made his solo comic book debut in May 1968 with The Invincible Iron Man #1. Prior to this, Iron Man stories had been featured in the publication Tales of Suspense, which included anthology science fiction and supernatural stories. Wear this tee underneath your Iron Man costume. Link to: Invincible Iron Man 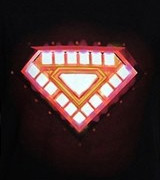 Here's your chance to own a one of a kind Iron Man shirt that features the Extremis chest core that is seen in The Avengers movie. These costume tees are based on the armor from the six-issue Extremis comic book story arc. The front displays an image of Tony Stark's chest reactor. Prepare for the next Iron Man movie experience and get your hands on one of the most sought after Tony Stark Iron Man movie items. Also, get classic Iron Man action figures and toys. Link to: Extremis Core Iron Man 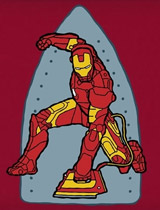 The front of this humorous tee displays an image of Iron Man with an iron in his hand. Putting two and two together, this Ironing Man design provides plenty of comic relief for both casual and diehard fans of the superhero. For a wealthy industrialist like Tony Stark, you would think that he would have been able to create a wrinkle-free armored costume. Link to: Ironing Man 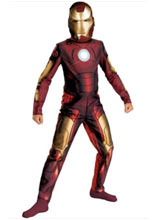 Available in both child and adult styles, these Iron Man costumes let the wearer become their favorite armor-plated superhero. The costume on the left was inspired by the 2008 Iron Man movie starring Robert Downey Jr. and Gwyneth Paltrow, as Tony Stark and his secretary Pepper Potts. Jeff Bridges also stars as Obadiah Stane (the Iron Monger). Wear your favorite Iron Man t-shirt underneath the costume for the ultimate superhero outfit. Who knows, you just might get a call from Nick Fury. I hear that he wants another good superhero to join The Avengers. Link to: Iron Man Costumes