In 2005, the first novel in author Stephenie Meyer's Twilight book series began its seduction over young adults. Readers were captivated by the forbidden romance between the vampire Edward Cullen and Isabella "Bella" Swan. The story left fans with an aching thirst for more of Edward and Bella, which helped to spawn other novels in the saga like Eclipse and Breaking Dawn. Quench your thirst for more with our gallery of Twilight t-shirts that include Twihard tees and the Team Edward Twilight t-shirt. Get other Twilight merchandise like Stephenie Meyer books.
To buy a T-Shirt, click the image or link for store and size information. 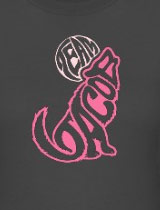 Fans of Stephenie Meyer's Twilight novels are well aware of the Eclipse and New Moon movies featuring the vampire Edward Cullen and the werewolf Jacob Black. Celebrate the movies and books while capturing Jacob's attention with these Team Jacob Twilight logo designs. The wolf longs for the love of Isabella "Bella" Swan, the lamb to Edward's lion. Wear it under the Bella Twilight jacket available in the gallery, which is perfect for chilly Forks days. In New Moon Jacob and Bella grow closer after Edward leaves to protect her from vampires. Link to: Team Jacob 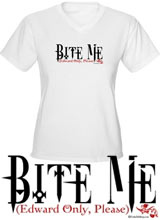 The design on these funny Twilight shirts offers either an insult or a tempting request, depending on whether or not your name is Edward Cullen. The chest of the tee reads, "Bite Me (Edward Only, Please)." This bestselling Twilight merchandise item lets the teenage vampire Edward Cullen know that he doesn't have to resist his temptation; he can drink your blood anytime he wants. Edward's inner struggle to resist his desire to bite and kill Bella can be seen as a metaphor for sexual frustration accompanying adolescence. It is a time when lust can lead to consequential acts of passion. Link to: Twilight Edward Bite Me 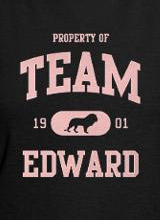 The logo on the front of these Twilight tees lets everyone know that you're part of Team Edward. Whether you're playing vampire baseball or defending humans as they try to escape the fangs of non-vegetarian vampires, the distressed rustic logo on this Edward Cullen Twilight t-shirt is the perfect match for either occasion. Available in both dark and light colors, the specific Twilight clothing item that you choose can be easily selected to reflect your mood. Do you feel dark like Edward (Robert Pattinson), who believes that he is a monster, or is your spirit brighter like Isabella Swan's? Link to: Twilight Team Edward 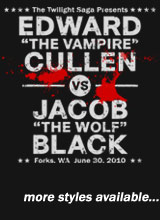 Wear this Edward vs Jacob tee and tell everyone that you saw the two rivals fight at Forks High School. The design displays a fight card style image that pits Edward (Robert Pattinson) vs Jacob (Taylor Lautner). They fight for the love of Bella (Kristen Stewart), who pleads in the movie, "Please don't make me choose." Fortunately, your choice is easy with this great showdown tee. The Twilight movie, based on Stephenie Meyer's book, was filmed primarily in Portland, Oregon, contrary to the book's setting of Forks, Washington. Kalama High School served as the school over Forks High School itself. Link to: Edward vs Jacob 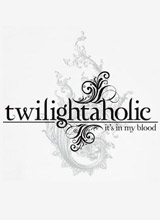 Edward Cullen (Robert Pattinson) is a 108-year-old vampire who appears to be seventeen. Bella Swan (Kristen Stewart) is a clumsy 17-year-old girl who moves to the small town of Forks, Washington halfway through her junior year of high school. To Edward, Bella's scent is a hundred times more desirable than any other human's, making it that much harder to not kill her. Edward's restraint draws Bella even closer, which further intensifies their gestating passion. Celebrate your addiction to their forbidden love with this Twilightaholic design. Pair it with Edward & Bella Twilight t-shirts. Link to: Twilightaholic 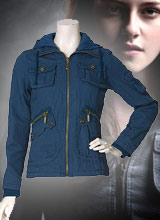 Here's your chance to own the Twilight Bella jacket from the movie. It's the BB Dakota jacket that Bella (Kristen Stewart) is wearing when the vampire Edward Cullen (Robert Pattinson) reveals his true identity. It's perfect for brisk Forks afternoons. This BB Dakota Twilight jacket features a fleece lining, ribbed cuffs, distressed pockets and brass button detailing. Imagine yourself as Isabella "Bella" Swan, the lamb to Edward's lion. Bella and Edward share a forbidden love that is first tested by Edward's desire to consume Bella's potent blood, and later by the threat of the vampire James. Link to: Bella Swan's Jacket from Twilight 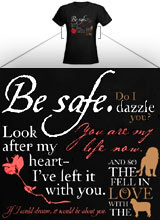 Available in a variety of colors and styles, this Twilight merchandise item displays a variety of Stephenie Meyer and Edward Cullen quotes from the book, including, "Look after my heart, I've left it with you," and "The lion fell in love with the lamb." Next to the quotes, is a red apple, which author Stephenie Meyer has said represents the forbidden fruit from the book of Genesis (concerning the red apple on the cover of her Twilight novel). Woo vampires in the attractive Twilight t-shirt on the left. Link to: Edward Cullen Quotes 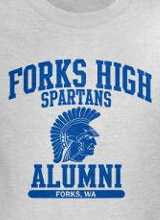 Let everyone know that you're friends with the coolest teens in Forks, Washington. The front of this Forks High Twilight tee displays a Spartan helmet logo to let everyone know that you graduated from Forks High School. Wear this popular Twilight clothing item and cheer the Spartans to victory. Tell your friends that you met the Cullens at Forks High School, and you're going to win the love of the vegetarian vampire Edward Cullen. Pair it with vampire Twilight shirts to show your support for Edward and his vegetarian vampire ways. Link to: Twilight Forks High Alumni 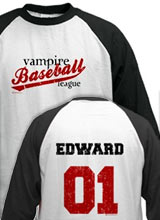 Support Edward Cullen in this cool Vampire Baseball jersey. The front of the tee reads, "Vampire Baseball League," while the back displays the name "Edward," along with a large number "01" printed in red. Perfect for both male and female fans of Stephenie Meyer's Twilight books, this cool Twilight t-shirt is great for baseball games and breezy afternoons on the porch with a novel. Wear it when you play against the vampire James, a non-vegetarian vampire who is relentless and hunts humans for sport. With this jersey on, everyone will know you're rooting for Team Edward. Link to: Vampire Baseball Jerseys 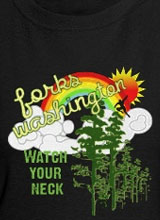 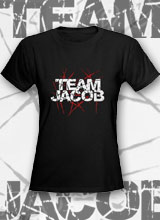 This popular specimen of Twilight merchandise displays red claw marks and the team name "Team Jacob." The werewolf Jacob Black is an old friend of Isabella "Bella" Swan (Kristen Stewart). She met him while visiting her father. Jacob is a Native American of the Quileute (pronounced Quil-yoot) tribe. He is also the one who tells Bella the truth about Edward Cullen (Robert Pattinson) and his family. This item is for fans who prefer werewolves to vampires. The red claw marks across the logo symbolize your favorite team from the movie adapted from Stephenie Meyer's Twilight book series. Link to: Twilight Team Jacob 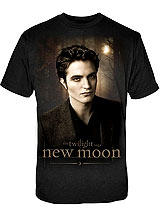 Edward Cullen was born Edward Anthony Masen on June 20, 1901 to Edward Sr. and Elizabeth Masen. Both he and his parents contracted the Spanish Influenza when it swept through Chicago, Illinois in 1918. On her death bed, Edward's mother asked physician Carlisle Cullen to "save" her son. Carlisle changed Edward into a vampire, and from that point onward he raised Edward as his own. The front of these Twilight t-shirts display an image of the movie character portrayed by Robert Pattinson, in addition to the movie logo. Wear this clothing item to let everyone know which vampire belongs to you. Link to: Edward Cullen 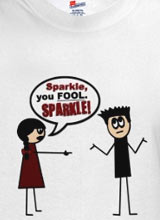 Does your boyfriend glitter in the sun like Edward Cullen (Robert Pattinson)? If not, then this is the perfect tee for you. You can try feeding your boyfriend a red apple, which shares a common symbolism with the red apple on Stephenie Meyer's Twilight book cover. The forbidden fruit might help him shine. For now, you'll have to expose his lack of sparkle ability with the design on the left that reads, "Sparkle, you fool. Sparkle!" This popular vampire Twilight t-shirt lets everyone know that you want a boyfriend who can sparkle under the sun. Link to: Sparkle, you FOOL. SPARKLE! 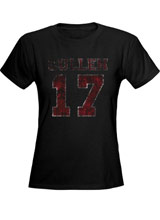 Are you smitten with a certain stupid shiny Volvo owner who sparkles in the sun? Recite your favorite Stephenie Meyer Twilight quotes in this vampire baseball Edward Cullen t-shirt. The design features the handsome bloodsucker's last name, along with the number "17". Let Edward know that, like Bella Swan, you're not afraid of him either. Bella (Kristen Stewart) is infatuated with the outsider Edward (Robert Pattinson). She tricks a family friend, Jacob Black, into telling her the local tribal legends, which helps her to conclude that Edward and his family are vampires. Link to: Vampire Baseball 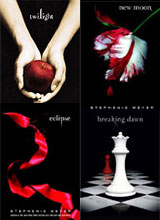 Catch up on your reading when it's sunny out and you don't want to sparkle. Get the Twilight books by Stephenie Meyer, including the complete saga box set and the graphic novels featuring the exceptional artwork by Young Kim. Her illustrations in the graphic novels provide a unique and satisfying interpretation of the story. Pair the books with a related tee from our galleries for a gift combination that any fan would enjoy. Link to: Twilight Stephenie Meyer Books and Graphic Novels