The Zombieland movie is an American comedy horror film about people battling for their lives after a zombie apocalypse. The cast includes Woody Harrelson who plays Tallahassee, a professional zombie killing Twinkie hunter; Jesse Eisenberg who plays Columbus, a loner inspired to create his own rules of human survival; Emma Stone who plays Wichita, a tricky tough girl who will do anything for her younger sister; and Abigail Breslin who plays Little Rock, a sidekick to her sister on their road trip to Pacific Playland. Own Zombieland t-shirts like the Zombieland Double Tap t-shirt and the I Love Zombies t-shirt. Browse zombie costumes.
To buy a T-Shirt, click the image or link for store and size information. 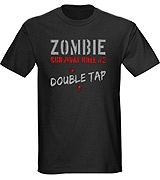 Fans of the movie Zombieland are well aware of Columbus' Rules of Survival, including limber up, beware of bathrooms, seatbelts, and enjoy the little things. According to the movie, survival rule number two, double tap, is essential. Just as Jesse Eisenberg says, "You think it's dead, one more makes 100% sure." Grab this Survival Rules of Zombieland t-shirt to get your friends talking or pair it with a Pacific Playland tee for a killer present. Link to: Survival Rule #2: Double Tap 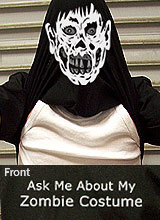 Want to play golf without being interrupted by zombies? Then take a hint from Bill Murray himself. According to Bill, if you look like a zombie, then you are accepted as one of them and they will not bother you. Woody Harrelson's character, Tallahassee, believes it is innate, similar to how buffalos know to travel in packs. Either way, this tee is for you. The front encourages people to ask about your zombie costume, and when they do, it can be flipped up to cover your face and display an inner graphic mask. Get this zombie t-shirt now but be careful, someone may mistake you for a real zombie and shoot you. Link to: Zombie Costume 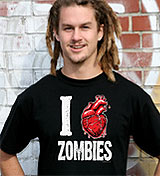 These I Love Zombies t-shirts are for any and all horror fans. The I Heart Zombies design featuring a realistic heart is available on either a black tee or a black and white ringer tee. Pick which one best suits your personality and then get back to doing your cardio. After all, it isn't survival rule number one for no reason. We suggest the Zombieland soundtrack to keep you pumped up during your workout. Stay alive by obeying the zombie rules. Link to: I Heart Zombies 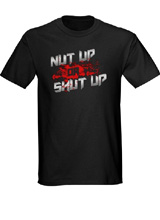 Nut Up or Shut Up t-shirt

While Columbus has a reasonable approach to zombies...basically stay away from them, his cohort Tallahassee takes the opposite approach and seeks them out without fear. He also won't let anything stop him in his Twinkie quest. Before his venture into an abandoned grocery store for his beloved Twinkie, he offers his words of wisdom that make up this Nut Up or Shut Up t-shirt. Woody Harrelson's character then proceeds to draw out the zombies by playing a banjo and then he kills one with it. Get this Zombieland tee or a Zombieland poster featuring this quote. Pair it with a Double Tap t-shirt for a killer gift. Link to: Nut Up or Shut Up 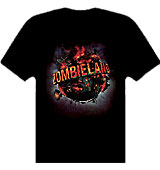 These official Zombieland t-shirts feature the movie logo displayed at the beginning of the film. Whether your favorite star is Jesse Eisenberg, Woody Harrelson, Emma Stone, Abigail Breslin or Billy Murray, this tee is sure to satisfy you and get some hysterical conversations started. Be sure to check out the rest of our zombie t-shirts, costumes and Zombieland merchandise like Tallahassee's hat. Our selection will make you nut up or shut up. Link to: Zombieland 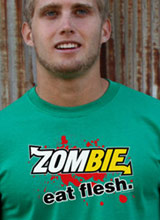 Zombies, eat flesh. This zombie t-shirt is a playful parody on a restaurant chain's famous slogan. While the story claims the sisters Wichita (Emma Stone) and Little Rock (Abigail Breslin) high-jacked the men's car twice to get to the supposedly zombie free Pacific Playland, we know they had to stop at their favorite sandwich shop along the way. This tee is available in a variety of sizes and will appeal to both men and women. You can grab one for each one of your friends. Take your time perusing our collection to find the perfect Zombieland t-shirt. Wear it under your favorite zombie costumes. Link to: Zombie Eat Flesh 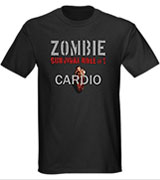 According to Jesse Eisenberg's character, "mad cow became mad person became mad zombie" so he created his Zombieland Rules for Survival. The first rule to make Columbus' list is cardio. Why? Once the zombies were created, it was survival of the fittest. If you couldn't outrun them, then you would become them. "The first ones to go were the fatties." Grab this cardio zombie tee shirt and stay in shape to help prevent the zombie apocalypse. Link to: Survival Rule #1: Cardio 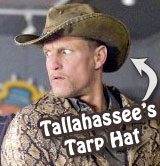 Nut up or shut up in Tallahassee's Cowboy Hat from Zombieland. These official Real Deal brand hats are made of recycled tarp that comes from the canvas tarpaulins that cover the backs of cargo trucks used to transport supplies to various parts of the Brazilian jungle. Each hat is different, with some even having patches and Portuguese printing on them. Link to: Tallahassee's Official Real Deal Brazil Recycled Tarp Cowboy Hat 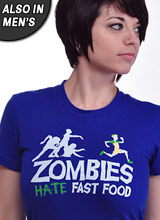 In case you don't have your weapon of choice at hand like a toilet tank lid, grand piano, hedge clippers or cotton balls, this tee will remind you that zombies hate fast food. This Zombieland shirt features a potential victim sprinting away from a pack of zombies. He looks to have limbered up and is dressed in running attire. This zombie tee emphasizes the importance of Survival Rule #1, Cardio. Remember the Double Tap and the other zombie rules. They could prove useful in saving your life. Link to: Zombies Hate Fast Food 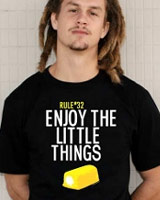 This Zombieland Twinkie t-shirt is designed with Tallahassee fans in mind. Not only does the Twinkie on this tee remind you of Woody Harrelson clinging to a roller coaster while gunning down zombies at Pacific Playland, but also his softer side, teaching Abigail Breslin to aim while shooting at Bill Murray's china. The front of this tee displays "Rule #32: Enjoy the Little Things," like this piece of clothing and those tasty little yellow cream-filled cakes that Tallahassee loves. Link to: Rule #32: Enjoy the Little Things 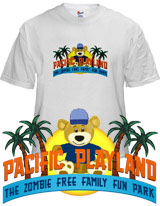 When everything is looking grim, think like Wichita and Little Rock by heading to Pacific Playland. These sisters were so determined to make it to the zombie free family fun park, they wouldn't let anything stop them. In addition to acting like zombies, they had to trick people out of guns and steal not just one, but two vehicles from grown men. If Pacific Playland is where you would go after a zombie apocalypse, then grab this Zombieland Pacific Playland t-shirt today. If you're lucky, there might even be a Twinkie in it for you too. Link to: Pacific Playland 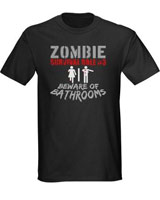 Columbus' Zombieland Survival Rule number three is Beware of Bathrooms. "When you're at your most vulnerable somehow they can just smell it." If you do find yourself in a bathroom-zombie scenario, learn from Jesse Eisenberg's mistakes. For example, toilet paper and cotton balls do not make good weapons, but shower curtains can be moderately useful. This Zombieland t-shirt is an amusing addition to any wardrobe. If you like this tee, check out the rest of the Zombie Survival Rules collection. Link to: Survival Rule #3: Beware of Bathrooms