The True Blood TV show is an HBO series based on The Southern Vampire Mysteries books by Charlaine Harris. The show highlights the Tru Blood beverage which is a synthetic blood drink that allows vampires to live with humans. Luckily for Bon Temps vampire Bill Compton (Stephen Moyer), it lets him 'mainstream' with humans and fall in love with telepathic waitress Sookie Stackhouse (Anna Paquin). Her brother Jason, friend Tara, boss Sam Merlotte and Fangtasia owner Eric round out the cast. Suck down your Tru Blood drink and look through our True Blood merchandise including True Blood shirts, Fangtasia t-shirts and more.
To buy a T-Shirt, click the image or link for store and size information. 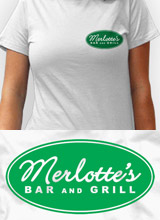 Any fan of the True Blood TV show is sure to recognize this logo. This True Blood Merlotte's t-shirt is Sookie Stackhouse's uniform at Merlotte's Bar and Grill in Bon Temp, Louisiana. Run by her longtime friend and shape shifter Sam Merlotte (Sam Trammell), Sookie spends her time here working as a waitress, socializing with co-workers Arlene (Carrie Preston) and Lafayette (Nelsan Ellis), and trying not to read the minds of all her customers. Link to: Sookie's Waitress 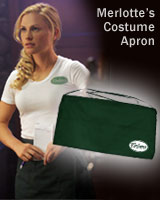 Serve up drinks at your next Halloween party in this Merlotte's Sookie costume apron. Everyone will think that you just finished your shift working for Sam Merlotte, your employer and longtime admirer. This green True Blood apron is the perfect complement to the white Merlotte's shirt that is also available. Get them both to complete your Sookie waitress outfit, the perfect Sookie Halloween costume. Just try not to read the minds of too many of your friends. Link to: Sookie Stackhouse Costume Apron 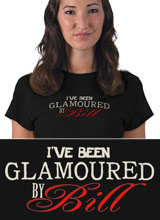 Most humans assume that vampires are cold and deadly, but not Sookie. She has found the light of her life in Bill Compton (Stephen Moyer), a vampire that can't see the light of day. Whether Bill is having a Tru Blood drink at Merlotte's Bar and Grill, or escorting Sookie to the vampire bar Fangtasia, he has her best interests at his never-beating heart. Whether you prefer to watch the True Blood Season One DVD, or curl up with a Sookie Stackhouse book, the story will tug at your heart. Grab this Bill Compton shirt to show that you are pro-vampire. Link to: Bill Compton 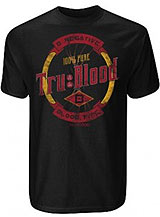 This classic black tee features the label from the Tru Blood beverage that inspired the hit HBO series True Blood. While this synthetic blood beverage is a favorite of Bon Temps vampire Bill Compton, some more discerning palates, like that of Fangtasia vampire club owner Eric Northman (Alexander Skarsgard), find it metallic tasting. The human version available is a delightful sparkling blood orange soda that has inspired many vampire themed cocktails. While it may not be real blood, this is as good as it gets. Grab a True Blood t-shirt today. Link to: Tru Blood 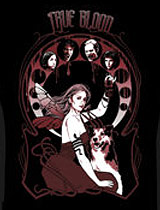 You have read the Sookie Stackhouse books by Charlaine Harris and you have watched Anna Paquin portray her in True Blood on TV, but now you can wear Sookie too. Whether she is hanging out with her shape shifting friend Sam Merlotte (Sam Trammell), visiting her sex addict brother Jason Stackhouse (Ryan Kwanten) in jail, or waiting on vampire Bill Compton at Merlotte's Bar and Grill, she is the most adored fangbanger in Bon Temps. The telepathic damsel in distress is represented on this True Blood tee. Pair it with a Fangbanger t-shirt. Link to: Sookie Fairy 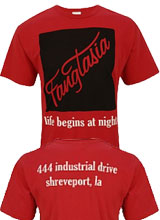 Whether you are a vampire or a fangbanger, Fangtasia vampire bar is the place to be. Fangtasia is owned by the vampire Eric (Alex Skarsgard), and it has been frequented not only by Sookie and Bill, but also by Jason Stackhouse (Ryan Kwanten) while looking for the drug V. This Fangtasia t-shirt can be seen on Sookie (Anna Paquin) in Season Two of True Blood and is a great addition to any fans collection. Snag one of these True Blood t-shirts tonight for yourself or for a fellow fan, because "life begins at night" as they say in the vampire world. If you support them, maybe you will be safe. Link to: Fangtasia 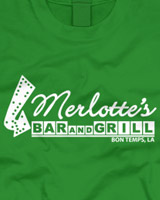 Sam Merlotte (Sam Trammell) not only owns the most popular business in Bon Temps, Merlotte's Bar and Grill, he is also our favorite shape shifter. Whether he is running around as a dog or simply as himself, we can't complain. He protects Sookie and gives jobs to her longtime friend Tara Thornton (Rutina Wesley), gay short order cook Lafayette Reynolds (Nelsan Ellis) and redheaded sweetheart Arlene Fowler (Carrie Preston). The employee style Merlotte's t-shirt featured above is great, but this Sam Merlotte True Blood tee is a must have. Link to: Merlotte's Bar and Grill 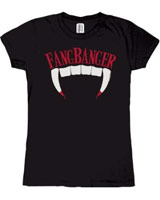 Whether you are a fangbanger or just a fan, this is the True Blood tee for you. Complete with a set of vampire fangs, this black True Blood shirt is sure to make you feel like you are a part of the Sookie Stackhouse book series, or a patron at Merlotte's Bar and Grill. Put in the True Blood Season One DVD and let the story take you away to Bon Temps, into the arms of your favorite character. Whether that character is a human, a vampire (as in this case), a shape shifter or a telepath, you can't go wrong. Link to: Fangbanger True Blood 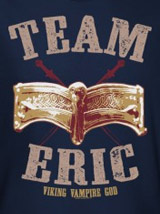 Eric Northman (Alexander Skarsgard) is not a fan of the drink Tru Blood, so he owns and runs the popular vampire bar Fangtasia. Since he believes that "mainsteaming" is not the true way of life for a vampire, Eric often has problems with Bill Compton (Stephen Moyer). He also has issues with Bill's relationship with a mortal. In an effort to get the two on better terms, Sookie works her telepathic magic for Eric and wins his trust. If you don't know what I'm talking about, then grab this True Blood t-shirt and catch up with the True Blood TV show on HBO. Link to: Eric Northman 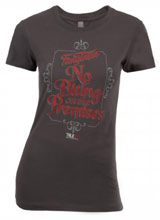 Sookie Stackhouse (Anna Paquin) may get tired of slinging beers to her mortal customers, but we bet she never gets tired of serving Tru Blood drinks. These official Tru Blood shirts feature a red and silver logo for everyone's favorite vampire bar. The TV show logo appears near the bottom. Don't be alarmed if your friends run when they see you in it. It's because they're once bitten, twice shy, especially when they see you in this Fangtasia t-shirt that promotes Eric's vampire bar. Get it or a Tru Blood beverage tee. Link to: True Blood Fangtasia 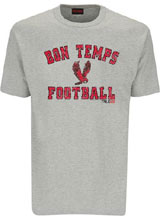 Jason Stackhouse (Ryan Kwanten) has the most exciting story in The Southern Vampire Mysteries books by Charlaine Harris. From a Bon Temps football stand out, to a V addicted ladies man accused of murder, to an enlightened member of the Fellowship of the Sun, and then an exemplary student at the Light of Day Institute, it has been one wild ride. He has been the dream man for Tara Thornton (Rutina Wesley), even when she was with Sam Merlotte (Sam Trammell). If Jason Stackhouse is number one in your heart too, then this is the True Blood tee for you. Pair it with a Merlotte's t-shirt. Link to: Bon Temps Football 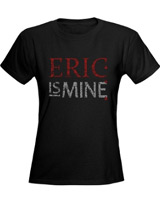 Eric is Mine t-shirt

What is the best way to protect your human from hungry vampires? Claim them. "Sookie is mine", as stated by Bill, is the only thing that kept her from being devoured by his fellow vampires, including Eric Northman (Alexander Skarsgard) who wanted her in his vampire club Fangtasia. This design turns the tables on the vampires and lets everyone know that Eric, the hottest vampire in Bon Temps, belongs to you. Enjoy your favorite True Blood episodes wearing this piece of vampire merchandise. Pair it with a Sookie is Mine True Blood tee today. Link to: Eric is Mine

This True Blood t-shirt features our favorite couple, vampire Bill Compton (Stephen Moyer) and Merlotte's telepathic waitress Sookie Stackhouse (Anna Paquin), posing together. These two won't let Eric, Jason, Tara, Sam or any other Bon Temps citizen end their relationship. In fact, it appears to make them a stronger couple. Let us all give thanks to the Tru Blood drink and what it has done for vampires and humans alike. For your own consumption, the True Blood beverage is available for you to toast Bill and Sookie's love. Link to: Bill and Sookie 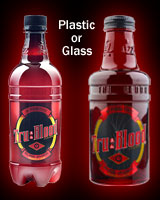 If you're wondering, "Where can I buy the True Blood drink?" look no further. Now you can consume the beverage preferred by vampire Bill Compton and others who opt not to feed on humans. While this official merchandise version is not exactly synthetic blood, it is perfect for vampire-themed cocktails or to drink as simple carbonated soda pop. It's refreshing orange flavor will quench your thirst even if you're not a vampire. Choose the more authentic glass bottles or opt for the more versatile plastic bottles. Link to: Tru Blood Beverage 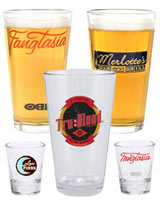 Be the life (or death) of the party by choosing from this wide variety of official True Blood glassware. Whether you imagine yourself having a beer at Lou Pine's or a pint of synthetic blood at Merlotte's, there's something for everyone, even fans of Eric Northman. Get a Fangtasia themed shot glass so that everyone knows that you hang out at his club. Other True Blood drinkware includes Bon Temps pint glasses and Merlotte's mugs. Drink up. Link to: True Blood Glasses, Merlotte's Pint Glass, Fangtasia Shot Glass