The Glee TV show is the FOX series that sparked everyone's interest in school choirs again. This musical follows William McKinley High School's choir, New Directions, as they battle other schools and deal with their cheerleader enemies, the Cheerios. Rachel Berry (Lea Michele), Quinn Fabray (Dianna Agron), Finn Hudson (Cory Monteith) and the other Gleeks are directed by Will Schuester (Matthew Morrison) who is constantly at odds with Cheerios coach Sue Sylvester (Jane Lynch). If this show gets you singing, then peruse our Glee t-shirts including the Gleek shirt, Glee Club tee and New Directions t-shirt. Also, check out our Cheerio t-shirt or McKinley High tee as well as potential Glee costumes to create.
To buy a T-Shirt, click the image or link for store and size information. 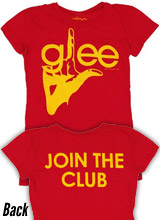 Don't stop believing! This Glee t-shirt is bound to make you sing as much as the members of New Directions in their amazing final performance of the season. Whether you are a star like Rachel or can barely hold a steady note, it doesn't matter because with this Glee Club tee you'll be ready to join. Don't be discouraged if singing and dancing aren't your talents. Whatever your passion is, never stop believing in yourself. You can watch new Glee episodes on FOX or catch previous seasons on DVD to get tips on how to better your own routine. Link to: Glee Join the Club 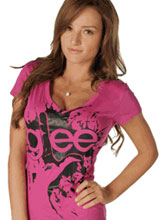 This logo Glee shirt displays your love of the show, including their final performance of the season, "Don't Stop Believing". Since this logo tee caught your attention, be sure to also check out the New Directions shirt to celebrate the William McKinley High School glee club. Hopefully, your choir is as great as theirs is, but if it isn't then grab a Glee soundtrack to listen to the music from the episodes. The sooner you sound like Quinn Fabray and Finn Hudson, the sooner you will be winning contests. If you can't sing then perhaps the Cheerio shirts may be more fitting. Link to: Glee Logo 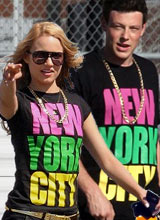 The talent of the cast of Glee is dazzling, so snag yourself this season 2 New York City tee that they wear when they sing "Empire State of Mind". Pair it with a Gleek t-shirt for the perfect combo gift. Their moves are tight, creative and youthful just like these Glee tees. It doesn't matter if you like the jock Finn, queen bee Quinn, preppy Rachel, mohawked Puck, or self-sufficient Mercedes; this NYC Glee costume tee can be worn by you and your friends just like the cast in season 2, episode 1. Check out the rest of our Glee t-shirts including the Cheerio t-shirt and the Glee Club tees in the gallery. Link to: Glee New York City 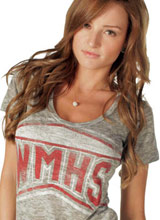 Many people enjoy high school but Glee viewers could all agree that attending William McKinley High School would be a million times better. Not only do they have the award winning Cheerios cheerleading squad led by Sue Sylvester (Jane Lynch), they have the New Directions show choir led by Will Schuester (Matthew Morrison). If you wish your school had all that, then get this McKinley High t-shirt for your wardrobe. Be sure to check out the Glee DVD in the gallery to watch episodes of the TV show. Hope you enjoy the Glee WMHS t-shirt! Link to: William McKinley High 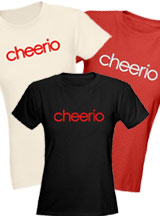 Not everyone in the world can be Gleeks; some people have to be Cheerios. It is as simple as that. These Cheerio t-shirts are for anyone who is proud to be a cheerleader rather than a glee club member and who wants to cheer it from the rooftops. This tee features Glee style lettering in the William McKinley High School colors of red, white and black with an added gold option. The design is available in a variety of styles for men and women. Pair it with a matching skirt for the perfect Glee Cheerio costume. Your friends can create alternate Glee costumes and together you can become Cheerios. Link to: Cheerio 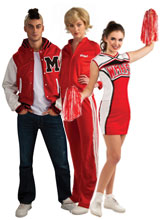 While you can create your very own Glee costume from many of the shirt options provided, here are some more official costumes to choose from. You can pick from a William McKinley High School cheerleader uniform like Quinn, a letter jacket like jock Puck or a red jumpsuit to be evil coach Sue. Snatch up a Glee DVD from the gallery to watch the episodes and make notes about how to be your character when you dress up. Also browse other merchandise. Link to: Glee Costumes 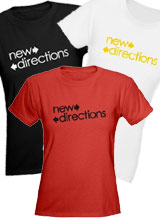 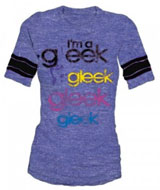 Gleek t-shirts are all the rage because not only is it the name of the New Directions group members, it is also used to describe the show's diehard fans. This Gleek shirt encompasses a wide variety of colors sure to satisfy anyone's Glee tee needs. Let your friends know that you like your television shows filled with rythm and music. Make sure you also check out our other merchandise like the Cheerio t-shirt in the gallery, as well as the Glee soundtracks to sing along with. Link to: Gleek 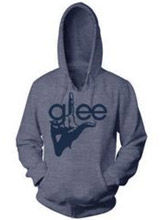 This Glee hoodie sweatshirt features the TV show logo to help you celebrate characters like Finn, Sue and Kurt. Wear it to prove that forming your hand into the L shape and holding it out is not such a bad thing anymore. Rather than being the symbol for "loser", it is now synonymous with the hit TV show Glee. Snatch this hoodie or a Glee shirt for you and all your show choir friends to show that this musical has a place in your life. Pair this sweatshirt or any one of our stylish Gleek tees or New Directions shirts with a Glee soundtrack that has the hit music you hear as you watch the episodes. Link to: Glee Hoodie 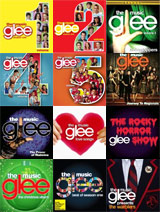 Relive the show stopping songs from the Glee TV show with soundtracks covering the most popular songs from each of the seasons. The Glee soundtracks list also includes collections like The Warblers, which features songs sung by The Dalton Warblers and The Power of Madonna, which includes the cast performing Madonna hits like "Express Yourself" and "Like a Prayer". Browse through to see the soundtrack list, download MP3s and to sample the songs on each of the albums. Link to: Glee TV Show Soundtracks List and DVDs