Created by cartoonist Matt Groening, The Simpsons began as a series of animated shorts that debuted on The Tracey Ullman Show in April of 1987. After three seasons, The Simpsons cartoon was picked up by FOX in the form of a half-hour prime time TV show. As the cartoon's popularity increased, so did the Simpsons merchandise. Below, you will find a selection of Simpsons t-shirts that include the coveted Pin Pals Simpsons bowling shirt and the Duff Beer Simpsons t-shirt. The Simpsons cartoon tells the story of an average, dysfunctional, middle-class American family living in the fictional town of Springfield. The family is comprised of the father Homer, his wife Marge, and their three children: Bart (10), Lisa (8), and Maggie (1). Browse our selection of Simpsons hats below, where you'll find more Simpsons merchandise, such the Duff Beer Simpsons hat.
To buy a T-Shirt, click the image or link for store and size information. 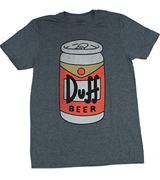 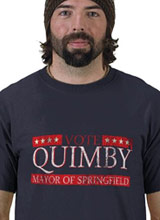 Mayor "Diamond Joe" Quimby is the longstanding mayor of the fictional city of Springfield. A composite parody of U.S. Senator Ted Kennedy, Quimby is a slick, opportunistic politician whose chief priorities seem to be keeping himself in office, womanizing, and various other forms of corruption. He was once the subject of 27 separate paternity suits, and he has numerous illegitimate children. Support Quimby by wearing this Vote for Quimby Simpsons t-shirt along with one of your favorite Simpsons hats. It is also available in women's styles. Link to: Vote Quimby Mayor of Springfield 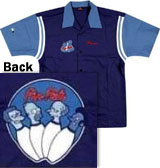 This Pin Pals Simpsons bowling shirt is a tribute to Homer's bowling team, the Pin Pals. Homer formed the team after he and Moe were told that it was "league night", and that they could not bowl unless they had a team. This coveted piece of Simpsons merchandise has quickly become a collector's item. The front features a smaller Pin Pals logo along with the name Homer stitched in red near the breast. Link to: Pin Pals Bowling or Patches 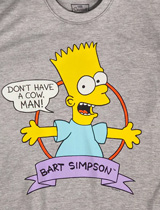 This tee celebrates The Simpsons and Bart's famous quote, "Don't have a cow, man!" It features Bart Simpson, who can usually be seen on his skateboard shredding the streets of Springfield. Wear it under a Homer Simpson costume, which showcases the infamous father of Bart, Lisa, and Maggie. Order this Bart design with Simpsons hats, or pair it with a fun Homer Simpson costume tee for a day spent imagining yourself as the doughnut loving dad. Add a Homer mask to round out your collection of Simpsons merchandise. Link to: Simpsons Don't Have a Cow Man 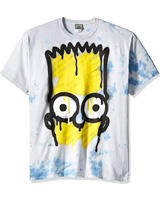 Choose either a Bart or Homer costume Simpsons t-shirt that displays either the face of Homer Simpson or his son Bart, depending on your preference (this style only features Bart). Wear your Simpsons tee as you enjoy one of the four types of Duff Beer, including Duff Dark and Duff Raspberry. Also, check out the Drink Duff Simpsons hat available below, and start building up your collection of Duff Simpsons merchandise. This is a good tee to wear under your Pin Pals Simpsons bowling shirt. Link to: Bart Face 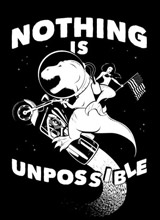 Ralph Wiggum is not as incompetent as everyone thinks. Despite gluing his ear to his shirt, pretending to be a firetruck, and wetting himself in public, Ralphie is a quite capable young man. The fronts of these Simpsons t-shirts let everyone know that Ralph Wiggum is able to do anything he sets his mind to. After all, nothing is "unpossible," including a mermaid riding a dinosaur on a motorcycle into space while carrying the American flag. "Me fail English? That's unpossible," states Ralphie on the show. Is he clueless like Homer Simpson, or is he a genius in disguise? Wear it with the Ralphie Simpsons hat. Link to: Ralph Wiggum Unpossible 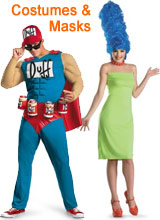 The Simpsons Costumes and Masks

Choose from a variety of The Simpsons outfits, including the Duffman costume (Duffwoman also available). As the mascot for Duff Beer, you'll be the hit of your next Halloween party. "Oh, yeah!" Deluxe Homer and Marge Simpson costumes are also available, complete with Marge's tall blue wig. If you are looking for just a mask instead, browse the Homer and Bart masks. Add your own unique accessories like a dozen pink frosted donuts. Your friends will appreciate them. Link to: The Simpsons Costumes and Masks 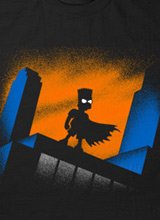 Do the Bartman in this Simpsons t-shirt that features Springfield's most rebellious superhero on the front. The design was inspired by the music video and the corresponding album The Simpsons Sing the Blues. Turn back the clock to the early 1990s and wear this T to teach your friends how to do the Bartman. Link to: Bartman Simpsons 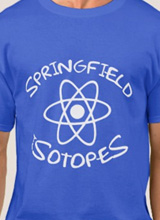 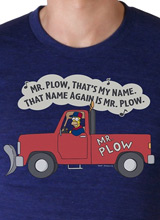 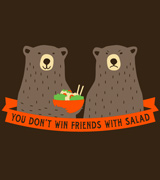 This T celebrates one of the Simpson's most famous quotes, "You don't win friends with salad." It is from the episode "Lisa the Vegetarian." Bart and Homer chant the quote during the episode, forming a conga line that Marge joins. This Simpsons t-shirt lets others know that you win friends in Springfield by cooking juicy steaks, not making salads. Wear it underneath an unbuttoned Pin Pals Simpsons bowling shirt. Link to: You Don't Win Friends With Salad 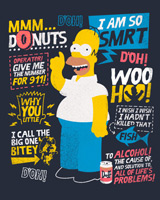 Dress in this unique piece of Simpsons merchandise that shows some of Homer Simpson's most popular quotes, including, "Woo Hoo!" The funny design will surely get you some laughs. Cheer on your friends in one of these Simpsons t-shirts. Homer Simpson is a proud member of the Springfield Unathletic Dept. and employee of Mr. Burns. Get this one of a kind Simpsons tee along with one of the Simpsons hats. You'll be ready to be lazy in no time. Link to: Homer Simpson Quotes 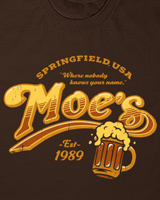 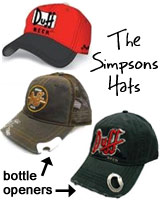 Express your adoration for the legendary cartoon with The Simpsons caps and Duff Beer hats. Younger fans will love the Mind Numbing Squishee trucker style cap, while adult fans who enjoy beer will prefer the Duff bottle opener hats. Yes, you read that correctly. There is a bottle opener built into the hats. The classic red Duff cap is perfect to wear as a Duffman costume accessory. Link to: Simpsons Hats, Duff Beer Hats