The Teenage Mutant Ninja Turtles cartoon series is based on the popular comic book of the same name and led to a series of movies. The story follows four crime fighting, pizza eating turtles that live in the sewer with their adopted sensei father, Splinter. Distinguished by their colored masks and weapons, Leonardo, Donatello, Raphael and Michelangelo battle enemies that include the Foot Clan, Krang, Shredder, Bebop and Rocksteady. If you want to be a part of this green fearless foursome, peruse our gallery of Teenage Mutant Ninja Turtles t-shirts including costume TMNT shirts, the Shredder hoodie, Krang t-shirt and hats. Turtle Power!
To buy a T-Shirt, click the image or link for store and size information. 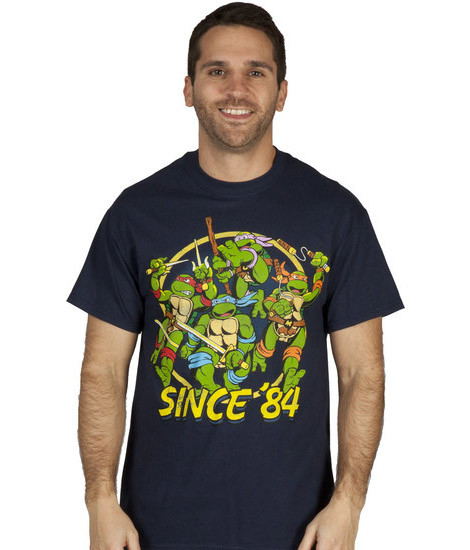 BUY
TMNT Attack t-shirt
Description: On this Teenage Mutant Ninja Turtles shirt we see Raphael equipped with his two sai, Leonardo with his ninja swords, Michelangelo with his nunchucks and Donatello with his bo staff ready to take on any bad guy. Not only are these reptiles crime fighters, they debuted in one of the greatest decades in recent history, the 1980s. This TMNT t-shirt reads, "Since '84". Don't make them take you out for going against their principles, like not sharing your pizza. For more excitement, check out the Teenage Mutant Ninja Turtles hats, comic books, action figures and movie posters. Cowabunga dude! Link to: TMNT Attack 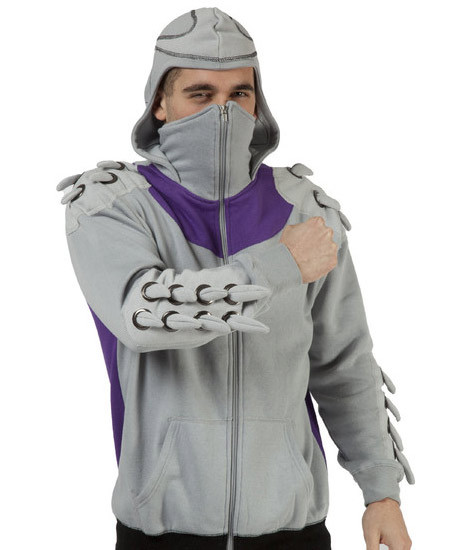 BUY
Shredder Hoodie
Description: This impressive Shredder hoodie is fully equipped with a built in face mask and pointy spikes just like the real Shredder's costume. Not only is it a spunky hoodie that is bound to get some attention any day of the week, this hoodie could also be used as a simple costume. When you wear this hoodie, have four of your friends wear the Teenage Mutant Ninja Turtles costume shirts below and another one wear the Krang hoodie. If you don't dress up anymore, then any of the TMNT tees are nice casual additions to any wardrobe. Pick your favorite for yourself or give one to your friend as a perfect present. Link to: Shredder Hoodie 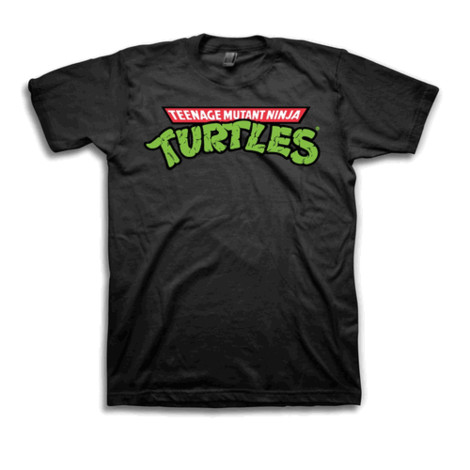 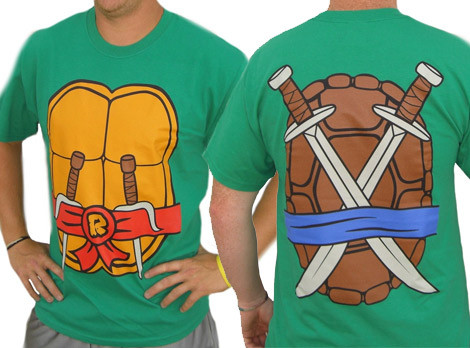 BUY
TMNT Character Costume tees
Description: If you recall, when the evil Shredder attacks, these turtle boys don't cut him no slack. If you dream about foiling villains' plans, then a costume TMNT tee is for you. This Teenage Mutant Ninja Turtle costume shirt is complete with weapons and a shell on the back. This design is available in Leonardo (blue), Donatello (purple), Raphael (red) and Michaelangelo (orange) for you to select from. While you're here, check out the Teenage Mutant Ninja Turtles hats and movie action figures available below, all based on the comic books. Link to: TMNT Character Costume 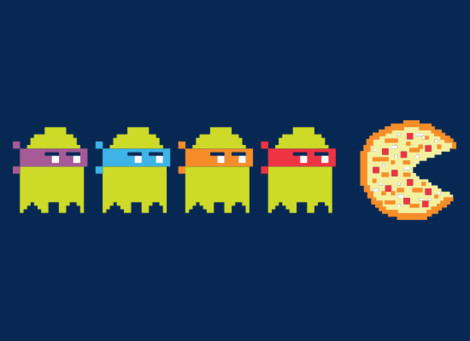 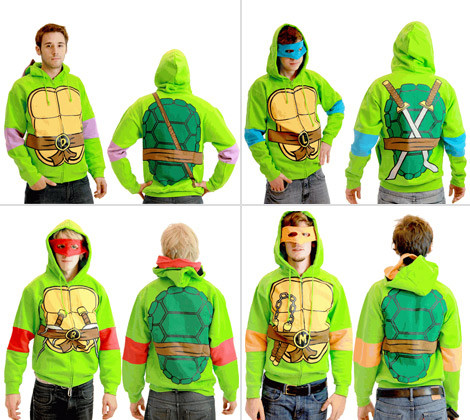 BUY
TMNT Costume Hoodies
Description: You want to be a hero in a half shell? No problem. Like the Teenage Mutant Ninja Turtles costume shirt, these TMNT costume hoodies will make you one of the gang in no time. The TMNT t-shirt graphic encompasses the front and the back of the hoodie. Top it off with a reversible knit cap that is available below, along with Teenage Mutant Ninja Turtles masks and original movie figures. Like the tee, the cap's front and back design transforms you into a full fledged turtle. You and your friends can go as Leonardo, Raphael, Donatello and Michelangelo. Also check out the Shredder and Krang hoodies. Link to: TMNT Costume Hoodies 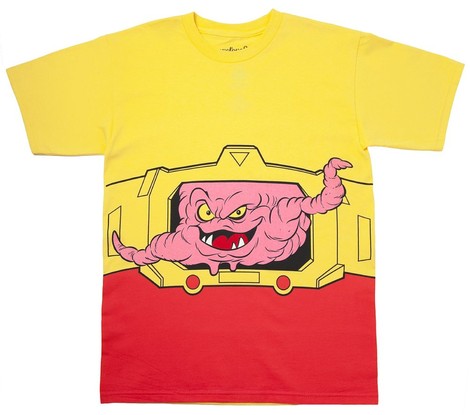 BUY
Krang Costume t-shirt
Description: When you think of a villain, you think of a person but that isn't always the case. Krang is a brain in a human shell that was banished from his own land, Dimension X. He has teamed up with Shredder to take the turtles down since neither have had success individually. The two take shelter in a subterranean round tank called the Technodrome to plot out their upcoming plans of attack. Purchase this or a Krang hoodie designed to look like the human shell he navigates around in. If you prefer his ally, check out the Shredder hoodie costume with built in face mask and spikes that are sure to catch everyone's eye. Link to: Krang Costume 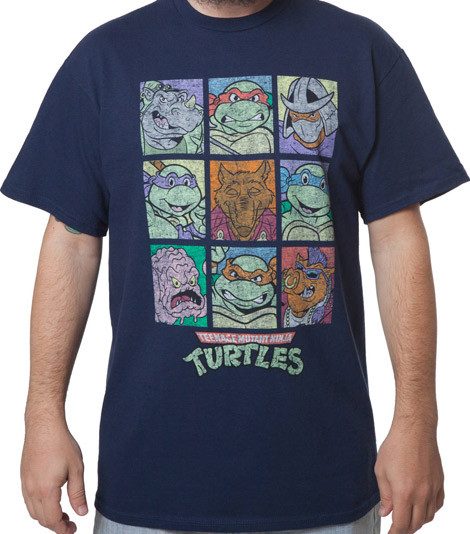 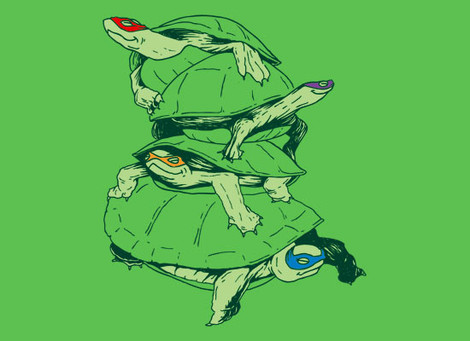 BUY
Masked Turtles shirt
Description: Just as the theme song goes, Leonardo leads, Donatello does machines, Raphael is cool but crude and Michaelangelo is a party dude. This Teenage Mutant Ninja Turtles t-shirt features the fun loving foursome minus the special effects. Don't worry, we hear Mikey and the gang still eat pizza, watch television and skateboard through the sewers. They just do it more slowly, including doing battle with villains. Speaking of foes, check out the Krang t-shirt and Shredder hoodie sweatshirt. Link to: Masked Turtles 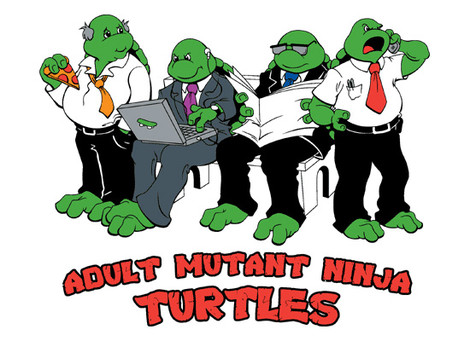 BUY
Adult Mutant Ninja Turtles t-shirt
Description: This TMNT shirt features the world's most fearsome fighting team as adults. What, you thought they'd stay teenagers forever? Leonardo is equipped with a newspaper instead of two ninja swords. Donatello gave up his bo staff for a laptop. Raphael settles disputes with his cellphone instead of his two sai, and it appears Michelangelo would rather hold a slice of pizza than his nunchucks. Celebrate some of their best moments with the Teenage Mutant Ninja Turtles tees, comic books, hats and movie DVDs. Link to: Adult Mutant Ninja Turtles 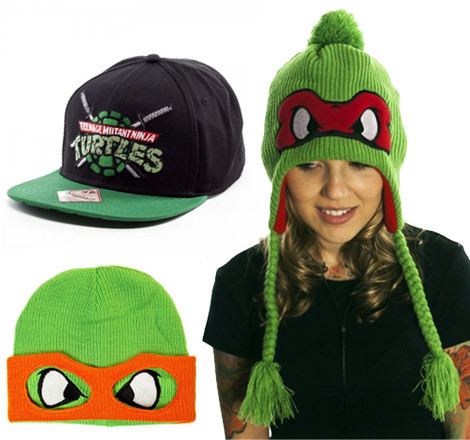 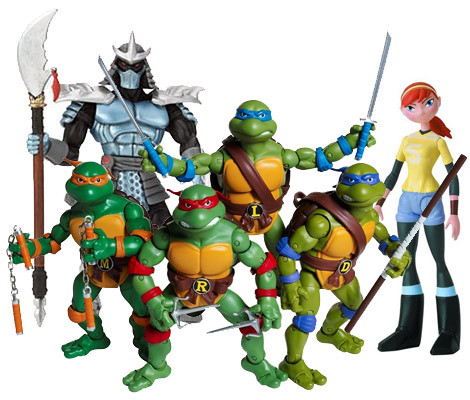 BUY
Teenage Mutant Ninja Turtles Action Figures
Description: You don't have to go into the sewers to find the half-shelled heroes. Here, you will encounter a plethora of TMNT action figures, including the four pizza loving turtles, their friend and reporter April O'Neil, mentor Splinter, and their sidekick Casey Jones. Due battle with the classic Shredder action figure, a Foot Clan Ninja, Rocksteady and Bebop, who use the Technodrome as their rolling home base. Just be careful not to get trapped in Dimension X with Krang. Pair the toys with a t-shirt from the gallery. Link to: Teenage Mutant Ninja Turtles Action Figures