The comic book superhero Batman was co-created by artist Bob Kane and writer Bill Finger. The Dark Knight made his first appearance in Detective Comics #27 (May 1939), and eventually spread to other media like radio, television, and movies. This gave birth to a world of Batman merchandise, including toys, costumes, and a variety of Batman clothing. Below, we present a handpicked gallery of the most attractive Batman t-shirts available, including the Dark Knight Joker t-shirt and the DC Comics Batman t-shirt. In addition to the Batman sweatshirt hoodies and clothes listed below, see more Batman apparel like costume masks, Joker outfits, Dark Knight clown masks and Batgirl costumes.
To buy a T-Shirt, click the image or link for store and size information. 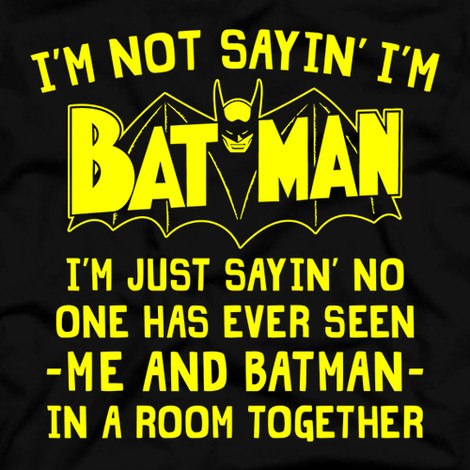 BUY
I'm Not Sayin' I'm Batman t-shirt
Description: One of our most popular items from our selection of Batman clothes, this funny Batman tee features the humorous message, "I'm not saying I'm Batman. I'm just saying no one has ever seen me and Batman in a room together." This Dark Knight t-shirt just might convince your friends that you're the Caped Crusader. It's the perfect gift for the Dark Knight in your life, even if he or she doesn't work in Gotham City and drive the Batmobile. This Batman tee shirt is fun piece of Gotham inspired apparel. Link to: I'm Not Sayin' I'm Batman 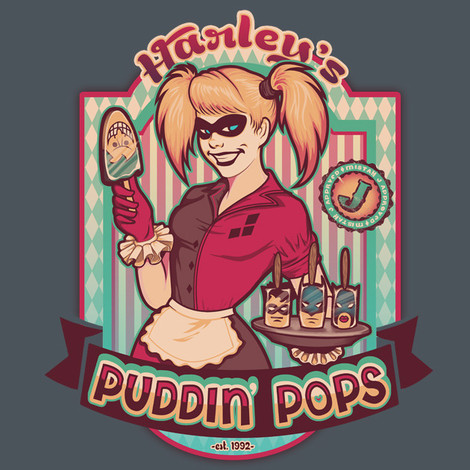 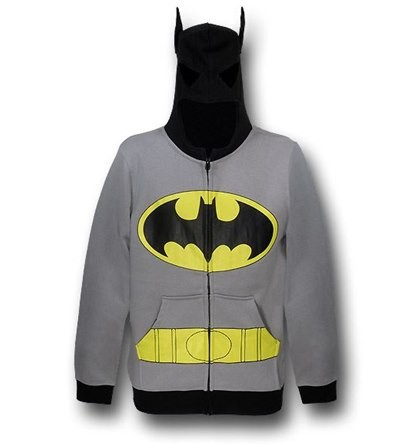 BUY
Batman Costume Hoodies
Description: Wear your favorite Batman and Robin t-shirt under this retro Batman Costume Hoodie that is based on Bruce Wayne's classic Batsuit from the original comic books. This grey Caped Crusader outfit features a removable snap-on cape. The hood features Batman ears on the outside and a drop-down mask that can be worn or folded under. Pair this Batman hooded sweatshirt with Junk Food Batman t-shirts for a retro Dynamic Duo ensemble perfect for fighting crime with Robin the Boy Wonder. Link to: Batman Costume Hoodies 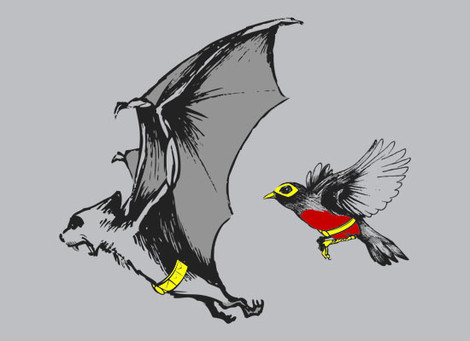 BUY
Bat and Robin t-shirt
Description: "Why so serious?" You don't have to be in this humorous Bat and Robin design. This unique piece of Dark Knight Batman clothing is perfect to wear as you watch the Joker get taken down in The Dark Knight movie. In the film, Heath Ledger portrays Batman's most notorious villain. He would definitely smile if he saw this design. Pair it with a Batman Dark Knight Joker t-shirt for the perfect gift. Link to: Bat and Robin 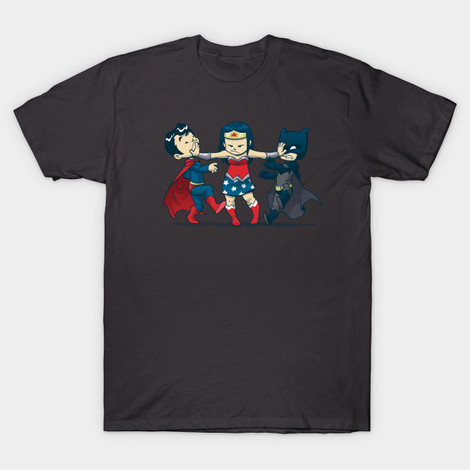 BUY
Super Childish t-shirt
Description: This Super Childish Batman tee displays Wonder Woman breaking up a fight between Batman and Superman. Their constant bickering does make for a funny Batman t-shirt. After all, the Caped Crusader uses intelligence to beat the Joker, not just his muscles, so he might fair okay against Superman. He's always ready to answer the Dark Knight Bat Symbol when it shines. Pair this humorous design with a Dark Knight t-shirt or vintage Batman apparel, which will provide a nice balance to your collection of modern and retro Batman clothes. Match it with a hat. Link to: Super Childish 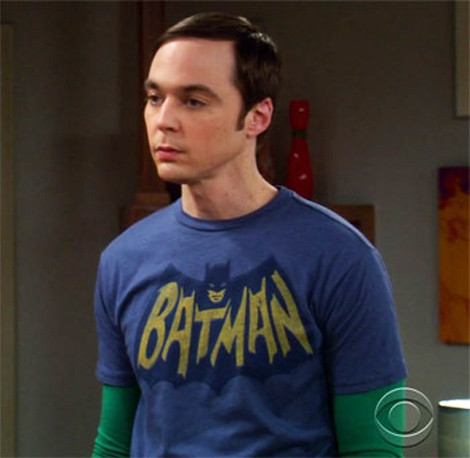 BUY
Sheldon's Batman TV Show Logo tee
Description: Proudly display the retro bat shaped Batman logo that is printed across the chest of this shirt that Sheldon Cooper wears on The Big Bang Theory television series. The title of the 1960s Batman show appears in yellow text inside of a dark blue bat symbol. Get this Batman merchandise item with an officially licensed piece of Dark Knight clothing. Wear it under a Batman track jacket or a comfy Batman sweatshirt. Celebrate the dark heroism of your favorite caped crusader. Link to: Sheldon's Batman TV Show Logo 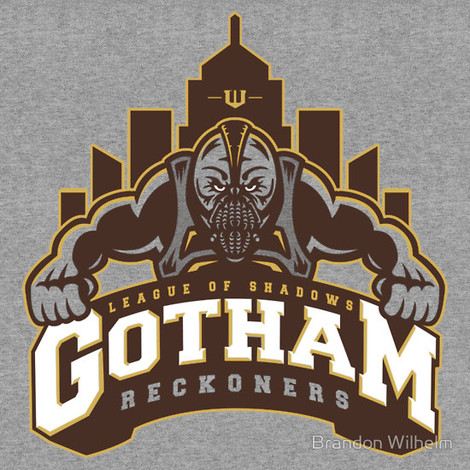 BUY
Dark Knight Rises Bane t-shirt
Description: In the spring of 1940, the Joker appeared in the very first Batman comic book. Fifty-three years later, the Dark Knight was introduced to an equally ruthless rival, Bane. This unique design displays an image of the DC Comics villain looking down on Batman. Bane is a genetically altered criminal and has superhuman strength, as the Dark Knight discovers the hard way. The fronts of these Bane Batman t-shirts display the tough character with his breathing mask covering his face. Pair this with a Joker design or a Junk Food vintage Batman clothing item. Link to: Dark Knight Rises Bane 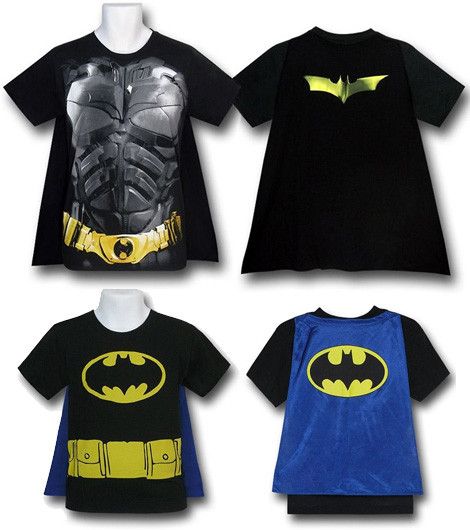 BUY
Batman Costume t-shirts
Description: Pair this Batman costume design with a DC Comics Joker t-shirt to embody either the Caped Crusader or the Dark Knight Joker. The latter is more reflective of the darker Joker who returned in the 1970s' comics, which took the Joker back to his roots, writing him again as a homicidal maniac who casually murders people on a whim. This was a welcomed change from the 1950s and 1960s, which, as a result of the Comics Code Authority's stricter censorship, saw the Joker become a harmless, laughing nuisance. Match it with a Joker tee shirt or a Batman mask. Link to: Batman Costume 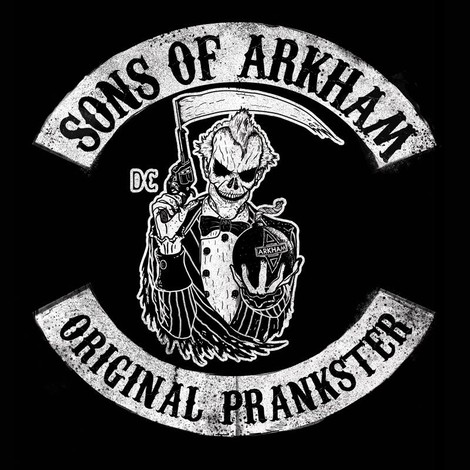 BUY
Sons of Arkham Joker t-shirt
Description: The character of the Joker, who first appeared in Batman #1 in the spring of 1940, was based on the Joker that is included in decks of playing cards. The comic's creators, Bob Kane and Bill Finger, revised the villain's appearance to resemble that of actor Conrad Veidt's character from the 1928 movie The Man Who Laughs. This Sons of Arkham Joker Batman t-shirt blends the Sons of Anarchy TV show logo with the Caped Crusader's archenemy. Link to: Sons of Arkham Joker 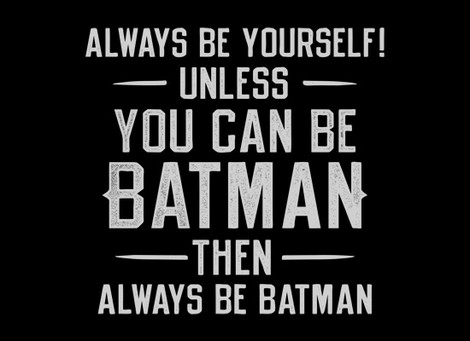 BUY
Always Be Batman tee
Description: "Always be yourself! Unless you can be Batman, then always be Batman." Follow these words of wisdom when taking on the Joker, who delivers his own quotes like, "Why so serious?" This can be worn as a funny Dark Knight tee that will make a solid addition to your closet of Batman clothes. As they chuckle at the design, it will have your friends thinking of the Dark Knight quote, "Why so serious?" The Joker is a fun loving guy who truly believes that laughter is the best medicine. This tee follows that same motto as it is showcased among the more artistically serious Batman merchandise. Wear this piece of humorous Batman apparel under a Batman track jacket or a comfy Batman sweatshirt hoodie. Link to: Always Be Batman 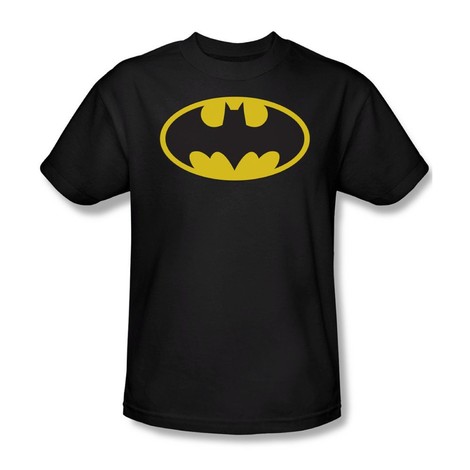 BUY
Batman Bat Logo tee
Description: Show everyone that you're on the side of the Caped Crusader by wearing one of these bestselling Batman t-shirts. The front of this officially licensed Batman clothing item displays a washed style bat logo. Whether you're a fan of the Dark Knight movie or you love the classic Batman comics, this piece of superhero apparel is perfect for you. Wear it on a day spent cruising around in your newly waxed Batmobile, as you pretend you're Bruce Wayne. Link to: Batman Bat Logo 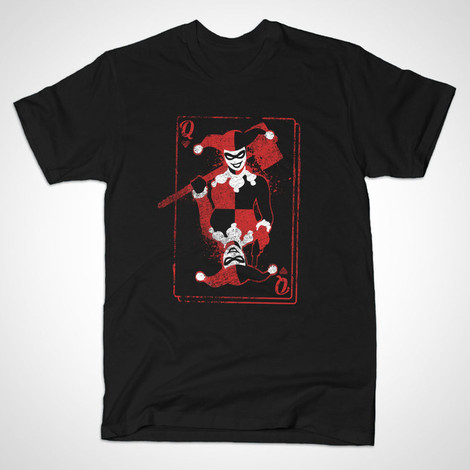 BUY
Quinn of Hearts t-shirt
Description: This Batman tee shirt features Harley Quinn on a playing card. After all, she is the Joker's sidekick. Dr. Harleen Frances Quinzel, M.D. was interning at Arkham Asylum when she met the Joker. She fell in love with him and eventually helped him to escape. Wear this Harley Quinn shirt under a Batman hoodie, so that you can stay warm while you're tuning up the Batmobile in the Bat Cave. Link to: Quinn of Hearts 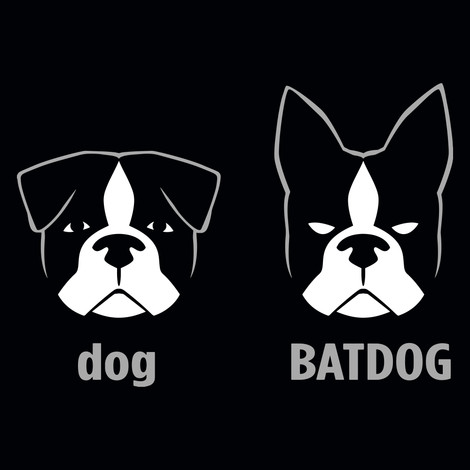 BUY
Batdog t-shirt
Description: If you're feeling too innocent for a Dark Knight Joker t-shirt or too modern for vintage Batman apparel, this Batdog shirt offers an animal-friendly take on the superhero. The design on this Batman clothing item features Batdog and his alter ego, dog. We don't imagine he would get along well with Catwoman. Wear it for a humorous twist on the Caped Crusader. Pair it with the Dark Knight Batman t-shirt that displays an image of Gotham City's "Why So Serious?" Joker holding up a playing card with an image of Batman on it. Link to: Batdog 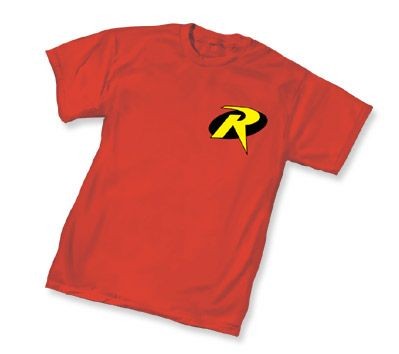 BUY
Robin Symbol t-shirt
Description: The front of this red tee displays the 'R' symbol from Robin's costume. The Boy Wonder was first introduced in 1940, roughly a year after Batman debuted. The purpose of the character was to draw in a younger audience. It worked and the two became known as the Dynamic Duo, taking on villains like the Joker, whose hauntingly happy white face hid the complexities of a formidable foe. Wear this Robin Symbol design to represent one half of the Caped Crusaders. Pair it with a Batman Dark Knight shirt or battle your friend in his Joker mask. Link to: Robin Symbol 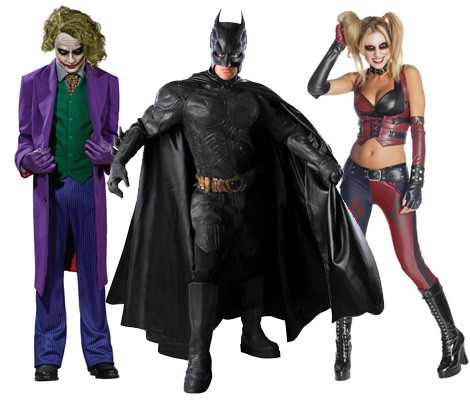