Francis Ford Coppola's movie The Godfather tells the story of the Corleone Mafia family, headed by Don Vito Corleone (Marlon Brando). The movie, which is based on Mario Puzo's bestselling book, chronicles the history of the Corleones from 1945 to 1955. Below, we show our admiration for The Godfather I movie by showcasing a selection of Godfather t-shirts that help to capture the movie's themes of loyalty, power, and vengeance. Keep things simple with The Godfather movie t-shirt shown immediately below, or spice things up with a Genco Olive Oil tee. For most of the clothing items, you'll find a stylish selection of corresponding Godfather hats, hoodies and apparel that would make even Don Corleone smile. With mafia shirts this cool, they're practically an offer you can't refuse.
To buy a T-Shirt, click the image or link for store and size information.

Let everyone know that you're the next Don in the Corleone family with this black, distressed The Godfather movie t-shirt. This popular tee features a distressed version of the classic movie logo, which shows a hand controlling marionette strings. This is symbolic of how Don Corleone (Marlon Brando) controls his "family" and trusted associates. Link to: The Godfather Movie 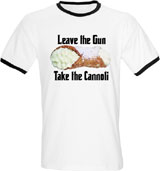 Leave the Gun, Take the Cannoli

Caporegime Peter Clemenza rules over the Corleone family's territory in Little Italy. After one of his associates kills Vito's driver Paulie in the car (Paulie knew about the assassination attempt on Vito Corleone and took the day off), Clemenza utters the memorable line, "Leave the Gun. Take the Cannoli." These Godfather t-shirts feature the phrase and a picture of the pastry. See more clothing styles. Link to: Leave the Gun, Take the Cannoli 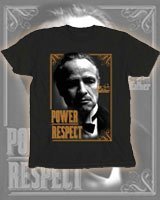 Demand both power and respect in this Don Vito Corleone Godfather t-shirt that features a portrait of Don Vito (Marlon Brando) on the front. The movie's logo appears inside the portrait on the right next to Brando's face. Wear it with a Godfather hoodie sweatshirt, or give it as a gift with a Godfather movie poster. Someday, Don Vito may call on you for a favor. Will you be ready to answer his call? Guarantee good graces by wearing this stylish Don Corleone tee. Match it with Godfather hats. Link to: The Godfather Power Respect 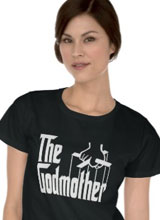 These bestselling women's The Godmother t-shirts are a fun way to show that Godmothers are just as cool as Vito and Michael Corleone. These black or white shirts read "the godmother" across the chest, with the classic Godfather hand and marionette strings below. Your godchildren will always feel taken care of after seeing you in this tee. This design is also available on tank tops, long sleeve Ts, hats, sweatshirts, and other clothing items. Link to: The Godmother 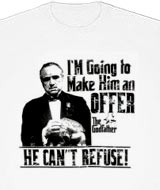 I'm Going To Make Him An Offer He Can't Refuse 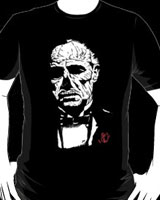 Always remember to never take sides with anyone against your family ever. Now only if Santino, Don Vito, Michael and Fredo could all follow that advice, then things would work out better for them. The image of Don Vito (Marlon Brando) as a zombie adds a bit of fear to this unique piece of Godfather clothing that comes in a variety of sizes. Wear it to let everyone know that Don Vito has come back from the dead. Pair it with a puppeteer logo design for an intimidating clothing combination. Link to: Don Zombie Godfather 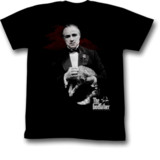 The Godfather Keep Your Friends Close

The front of this black Godfather t-shirt displays a black and white movie image of Don Vito Corleone (Marlon Brando) holding his cat. The tee is a reminder of the Don's well-known motto, "Keep your friends close, but your enemies closer." In The Godfather Part II, Michael Corleone tells Frankie Pentangeli that his father taught him this lesson. This phrase is often repeated in other movies and television shows, especially those with the mob or gangs. "Leave the gun. Take the cannoli," is also a popular quote. Link to: The Godfather Keep Your Friends Close 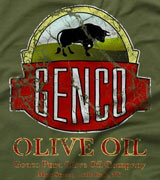 At a young age, Vito Corleone befriended Genco Abbandando in New York after being adopted by Genco's family. Genco became like a brother to Vito, and years later they started an olive oil business together, Genco Importers. Genco Olive Oil Godfather t-shirts available here advertise Vito's business, which he used as a legal front for his organized crime syndicate. Look for the Genco logo on Godfather hoodies, mugs, and other clothing. Link to: Genco Olive Oil 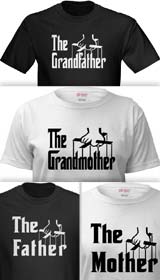 These Godfather Family Member shirts are the perfect gifts for the patriarchs of your family. Dress Grandma and Grandpa in one of these cool tees, which will surely put a smile on everyone's face. There are styles for mom and dad too. They'll help to remind your kids who's in charge. Browse the merchandise items on the left to see other types of clothing that these designs can be purchased on, such as Godfather sweatshirts, hoodies, boxers, and long sleeve Ts. The designs are also available on a variety of Godfather hats. In addition to the names shown on the left, a selection of popular Italian last names is available in similar tee styles. Link to: Godfather Family Member Logo 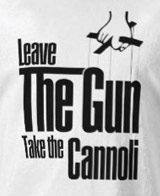 This logo style black Godfather t-shirt features the famous quote that Clemenza says to Rocco after they kill Paulie, the driver of Don Vito Corleone (Marlon Brando). "Leave the gun, take the cannoli." This stylish The Godfather tee features text similar to that seen in the familiar Godfather logo for the Francis Ford Coppola film. This clothing item is a cool and unique way to show your respect for Il Padrino and the memorable mob movie. Wear it under a warm Godfather hoodie sweatshirt. Link to: Leave the Gun Take the Cannoli