The Full House TV show follows the life of widowed father Danny Tanner (Bob Saget) as he tries to raise his daughters D.J. (Candace Cameron), Stephanie (Jodie Sweetin) and Michelle (Mary-Kate and Ashley Olsen). Aided by his musician brother-in-law Jesse Katsopolis (John Stamos) and best friend comedian Joey Gladstone (Dave Coulier), the group forms a new type of family. People of all ages enjoy this kid friendly show, making it a hit to this day. If you grew up with the Tanner family of San Francisco, then peruse our gallery of Full House t-shirts featuring family quotes like the How Rude shirt, Cut It Out t-shirt and Have Mercy tee. Don't miss other hits including the Smash Club shirt, Jesse and the Rippers t-shirt and Ranger Joe tee. Be a kid again and enjoy this blast from the past.
To buy a T-Shirt, click the image or link for store and size information. 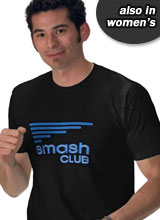 Jesse remembers his time spent at The Smash Club well, so when he sees that it is going to be demolished, he decides to step in. Rather than let his favorite childhood hangout turn into a parking lot, Jesse decides to buy and restore it for the new generation so they can have the same fond memories of The Smash Club that he has. If you wish you had a hangout where you could listen to young bands like Human Pudding when you were underage, then snag your very own The Smash Club Full House shirt now. Link to: The Smash Club Throughout the years, Joey Gladstone had a number of jobs. Aside from being a standup comic and caregiver, he was also a host for the Rush Hour Renegades radio show, a jingle writer for J&J Advertising and the host of the Ranger Joe children's TV show. This Full House t-shirt highlights his time as Ranger Joe. Along with sidekicks Mr. Woodchuck and Lumberjack Jess, Joey was able to capture the hearts of children everywhere. If you were one of his fans, show it with this unique design. Link to: Ranger Joe 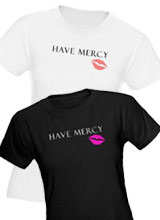 Most of the characters on the show Full House had their own quotes throughout the series, Uncle Jesse's was "have mercy". Although it was used in many different types of situations, the most common was after a passionate kiss. If you either adopted the line for yourself, can't get enough of John Stamos, or have had a kiss that made you feel like crying for mercy, then snag this Full House Have Mercy t-shirt for your own wardrobe. It is bound to make you yell out the Jesse Katsopolis quote "haaavvvve meeeeeerccccyyyy". Link to: Uncle Jesse Have Mercy 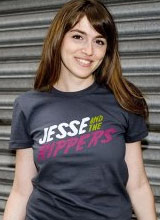 Jesse and the Rippers t-shirt

This Jesse and the Rippers shirt is for fans of Uncle Jesse's musical talents. The band's song "Forever", was sung by Jesse on his wedding day to Rebecca and again when they made a music video for it. The song was originally written and recorded by The Beach Boys, who were in the video as well. As a friend of the band in real life, John Stamos was able to have them make cameos on a couple episodes throughout the series. Get jamming in your Jesse and the Rippers Full House shirts now. Link to: Jesse and the Rippers 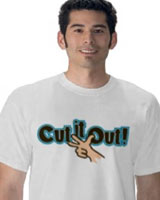 Cut It Out Full House t-shirt

Trying to decide which of the Full House tees make the cut? This official Dave Coulier design Cut It Out t-shirt is a definite contender. It is based on the famous quote Joey Gladstone uses in both his comedy routine and in daily life when people are laughing at his jokes. Actor Dave Coulier who played Uncle Joey even made a funny rap remix about the Full House TV show emphasizing the use of this line. Get yours now to display Uncle Joey Gladstone's quote. Link to: Cut It Out Full House Rush Hour Renegades, Comin' Atcha! Joey and Jesse often worked together and this gig was no different. They did a radio show on KFLH FM 95.6 and were an absolute hit. If you prefer Jesse by himself then check out the Jesse and The Rippers and Have Mercy tees that were designed for John Stamos enthusiasts. Couldn't get enough of Steph? Our How Rude t-shirt is ideal for fans of the adorable middle child. We have something for everyone so keep perusing. Link to: Rush Hour Renegades 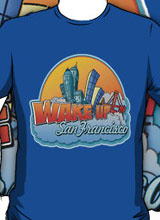 After doing sports reports for years, Danny Tanner got his big break when he was asked to be a host for the talk show Wake Up San Francisco! His excitement was short-lived when he found out he would actually be co-hosting with Rebecca Donaldson. However, the two quickly bonded, becoming a great match. Eventually, they became family when his brother-in-law, Jesse Katsopolis, married the lovely Becky a few years later. Get this Full House Wake Up San Francisco t-shirt to celebrate the talk show that started it all. Link to: Wake Up San Francisco 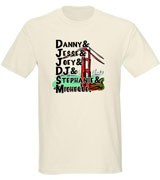 Although Danny, Jesse, Joey, DJ, Stephanie and Michelle aren't all Tanners, they are all an important piece of the Tanner family. If watching this San Francisco family drive across the Golden Gate Bridge brings back fond memories of your childhood, then these Full House shirts will too. This names design is perfect for anyone who can't decide which character is their favorite because they are all special in their own ways. Link to: Tanner Family Full House How Rude! You might recognize the quote on this Full House tee as Stephanie Tanner's hit phrase. Young actress Jodie Sweetin was often given the witty one-liners that left fans cracking up episode after episode. If you grew up either wishing you were a Tanner, quoted Stephanie as a kid, or just wished you had your very own Mr. Bear, then this t-shirt was made for you. The design's retro 90s' look captures the How Rude quote perfectly. Link to: How Rude 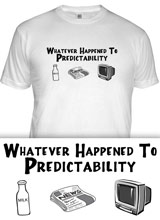 Whatever Happened to Predictability t-shirt

The Full House theme song changed from season to season but was always based on "Everywhere You Look" written by Jesse Frederick. The song posed an intriguing question, "Whatever happened to predictability? The milkman, the paperboy, evening TV." It's true that the world is changing and becoming more complicated every year but Full House t-shirts like this one can always make things a little brighter. Try adding this clothing item to your collection to spread a few smiles around. Link to: Whatever Happened to Predictability You Got It, Dude t-shirt

You got it, dude! Yep, you got it, that is little Michelle Tanner's quote. The role was played by the Olsen twins, a dynamic duo who have gone on to become two of the world's youngest millionaires, running their own entertainment and fashion empires. Fans watched them grow from infancy into influential businesswomen out to take on the world. Celebrate their start with this Full House You Got It Dude t-shirt. Link to: You Got It, Dude