The movie Juno is a slightly offbeat comedy starring Ellen Page as 16-year-old Juno MacGuff, a teen who discovers she is nine weeks pregnant by her friend and longtime admirer, Paulie Bleeker (Michael Cera). Juno's widespread appeal stems from her defiance to conform to the typical teen stereotypes for a girl her age. Here, we celebrate the rebel teen with a gallery of Juno t-shirts and movie merchandise, including the Juno Hamburger Phone. Tees include the Ellen Page Juno t-shirt, the retro Slinky t-shirt, and the Paulie Bleeker shirt. The Juno movie has earned over $100 million (U.S.), in addition to a Best Screenplay Oscar.
To buy a T-Shirt, click the image or link for store and size information. 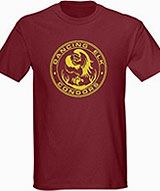 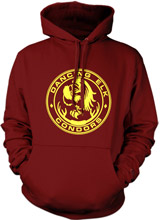 The front of this sweatshirt displays the Dancing Elk Juno movie logo across the chest, allowing you to show off your support for the Dancing Elk Condors. Wear it to run track like Paulie Bleeker or to repeat Rainn Wilson's funny Juno quote, "This is one doodle that can't be undid, homeskillet." His character, Rollo, says this after he observes Juno shaking her pregnancy test like an Etch A Sketch, hoping to clear the current result. Link to: Juno Dancing Elk Sweatshirt 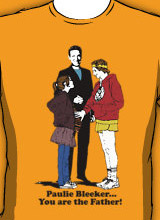 Paulie Bleeker You are the Father t-shirt

These funny Paulie Bleeker Juno t-shirts display the couple on the Maury Povich talk show. Paulie has on his distractingly high-cut shorts and has his hand on Juno MacGuff's stomach. Maury announces, "Paulie Bleeker... You are the Father!" As if there was any doubt. Paulie is wearing his shorts with his maroon Dancing Elk Condors Juno hoodie that features a logo for the high school on the front. Use this tee to celebrate the news that was revealed on Maury. Pair it with a Juno Hamburger Phone for the ideal gift for the fan you know. Link to: Paulie Bleeker You are the Father 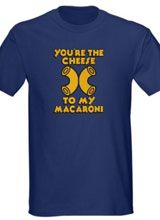 Is there a cheese to your macaroni? The Junoism on the front of this Ellen Page Juno t-shirt was derived from the Juno MacGuff quote, "As far as boyfriends go, Paulie Bleeker is totally boss. He is the cheese to my macaroni." After all, what would your macaroni be without its cheese? It would be a mere noodle in this lonely world. Wear one of these Juno movie tees to let everyone know that there is a cheese to your macaroni. The front of the tee displays the quote and noodles. Purchase this Juno movie tee with a maroon Dancing Elk Condors t-shirt that features the high school logo. Link to: Juno Macaroni 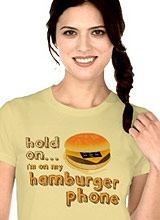 This humorous Juno tee displays the movie quote, "Hold on, I'm on my hamburger phone." It celebrates Juno's novelty hamburger phone (available below). It is nearly as popular as the pregnant Japanese comic book hero called Most Fruitful Yuki. Mark Loring (Jason Bateman) shows Juno the anime comic in the movie in an attempt to give her a positive pregnant role model; someone who might inspire her to see herself as something other than a "cautionary whale." Use your hamburger phone to tell friends about the Most Fruitful Yuki character. Get this Juno merchandise item today. Link to: Juno Hamburger Phone 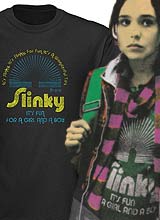 The front of this official Slinky Juno shirt displays an identical design to the tee that Juno wears in the movie. The distressed, retro design pays homage to the Slinky toy by displaying the Slinky logo and the commercial's familiar jingle, "It's slinky, it's slinky, for fun it's a wonderful toy. Slinky. It's fun for a girl and a boy." Browse through to see other designs, and choose the official Slinky t-shirt that fits your style the best. The coil-shaped toy was invented in the 1940s after mechanical engineer Richard James observed a torsion spring falling off a table and rolling around on a deck. Link to: Juno Slinky 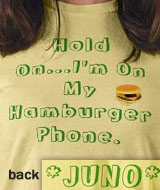 "Hold on, I'm on my hamburger phone..." The front of these Juno t-shirts feature the popular Juno movie quote, which she says when she is telling her friend Leah (Olivia Thirlby) that she is pregnant. Leah asks Juno, "Are you sure it's not a food baby? Did you eat a big lunch?" Juno replies, "This is not a food baby all right? I've taken like three pregnancy tests, and I'm fo' shizz up the spout." Use one of these Junoisms on your Juno Hamburger Phone. Link to: Juno Hamburger Phone 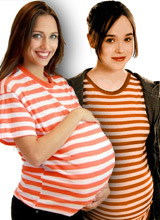 This orange and white striped Juno t-shirt will help you to create the perfect Juno costume. Add a hoodie and a pregnant belly (or pillow) to complete the look (only the shirt is included). Wear it as you sing the Moldy Peaches song lyric, "Part time lover, full time friend," sung by Juno MacGuff and Paulie Bleeker at the end of the movie. The name of the song is "Anyone Else But You". Ellen Page performed the song for Barbara Walter's during an interview. More lyrics from the song include, "You're always trying to keep it real, and I'm in love with how you feel. I don't see what anyone can see in anyone else but you." Link to: Juno Costume 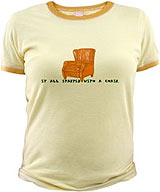 It All Started with a Chair

This Ellen Page Juno tee shirt celebrates the main character's opening line from the movie, "It all started with a chair." What started with a chair you ask? Let's just say that the chair acted as the stage for Paulie Bleeker and Juno MacGuff's tangle with intimacy, a tangle that ended with Juno pregnant. The front of this ringer T displays a rendering of the infamous chair, along with the Juno MacGuff quote from the Academy Award nominated film. Ellen Page also received a Best Actress nomination. Link to: It All Started with a Chair 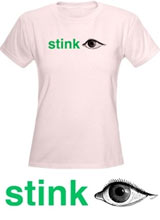 The design on this tee references the funny Juno quote, "Your girlfriend gave me the stink eye." Juno tells Paulie Bleeker (Michael Cera) this in the hall at school after Katrina De Voort (Ashley Whillans) glares at her in art class. Paulie replies, "Katrina's not my girlfriend alright? And I doubt she gave you the stinkeye, that's just how her face looks, you know? That's just her face." In addition to tank tops, the design on these Ellen Page Juno t-shirts is also available on v-neck tees and ringer Ts. Wear this piece of Juno merchandise to let all the guys know that their girlfriends gave you the stinkeye. Link to: Juno Stinkeye 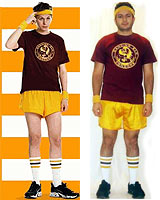 This Juno Paulie Bleeker costume is the perfect outfit to wear for a quick run or a happening costume party. The officially licensed ensemble includes the tee, gym shorts, two terrycloth wristbands, a terrycloth headband and striped gym socks. Make Bleeker proud with this fun Juno costume. Just make sure that you don't make a doodle that can't be undid. After all, girls will likely be swooning over the gold gym shorts and matching party socks. They worked for Paulie in the Juno movie. Link to: Paulie Bleeker Costume 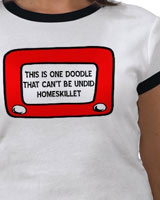 The design on this humorous Juno t-shirt captures the memorable comment that Rollo (Rainn Wilson) makes to a possibly pregnant Juno. As she shakes her pregnancy test like an Etch A Sketch, Rollo tells her, "This is one doodle that can't be undid homeskillet." The Juno Rainn Wilson quote is displayed on the screen of the Etch A Sketch featured on the front of this tee shirt. Just remember that shaking the wearer won't clear the screen. Link to: Etch A Sketch Juno Rainn Wilson Quote 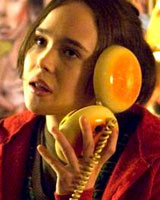 Are you a fan of the hamburger phone from Juno? Make a statement with a unique burger phone that not only works, but is an instant conversation piece, both when you're on a call or not. Almost all of the options are in the form of a cheeseburger (sorry, no Big Macs yet). Oh, and the phones work much better without ketchup and mustard. Enjoy this fun piece of movie related merchandise. Link to: Ellen Page Juno Hamburger Phone