The HBO Entourage TV show documents the fictional journey of A-list movie star Vincent Chase (Adrian Grenier) and his childhood friends, as they try to navigate the unfamiliar and often unforgiving Hollywood landscape. Below, we present a selection of attractive Entourage t-shirts that will help to make you feel like a true Hollywood player. Own the bestselling Let's Hug It Out t-shirt or meet your agent wearing the Entourage ADHD t-shirt. Several of the show's characters, including Vincent Chase, Eric "E" Murphy, and Johnny Drama, are loosely based on executive producer Mark Wahlberg's own Hollywood entourage. Wear the merchandise as you listen to the HBO Entourage Soundtrack or watch the DVDs.
To buy a T-Shirt, click the image or link for store and size information. 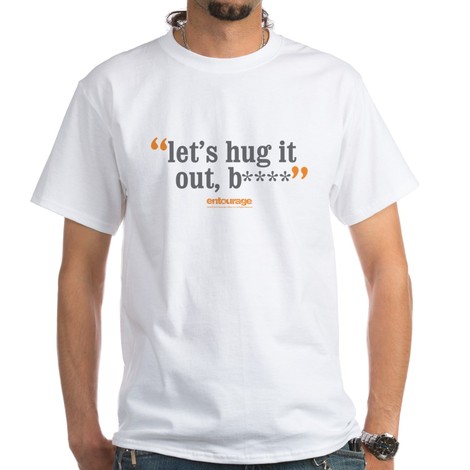 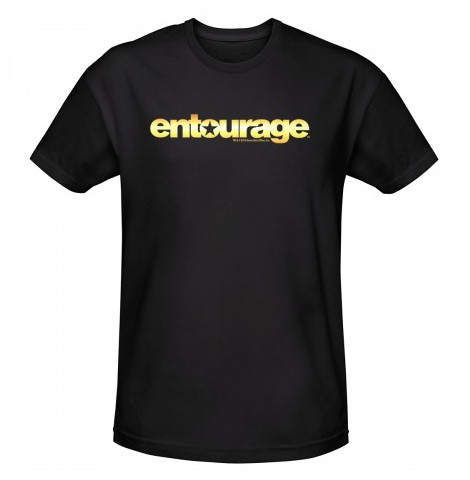 BUY
Entourage Logo t-shirts
Description: The front of this tee displays the familiar Entourage TV show logo. The distressed gold logo design will have your friends asking you if Turtle is your driver. The design looks great on this black tee. Whether you know an aspiring actor or a loyal fan of the Entourage TV series, this tee will make the perfect gift. These Entourage t-shirts are 100% cotton and preshrunk for added comfort. Relax in this tee as you listen to the HBO Entourage Soundtrack CD. Link to: Entourage Logo 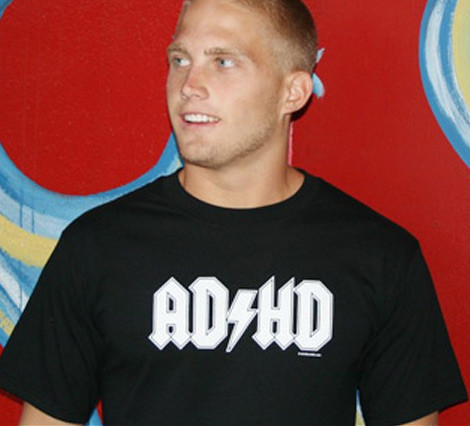 BUY
Vincent Chase ADHD t-shirt
Description: This funny Entourage t-shirt features an ACDC rock'n'roll style logo. The letters in the logo have been changed to read, "ADHD," which stands for Attention-Deficit Hyperactivity Disorder. Vincent Chase wears a similar ADHD t-shirt on the HBO Entourage TV show. It can be seen during the season three episode where Johnny Drama tries to avoid seeing any reviews for his new TV series. Now you can wear your own ADHD tee... if you can sit still long enough to place the order. Link to: Vincent Chase ADHD 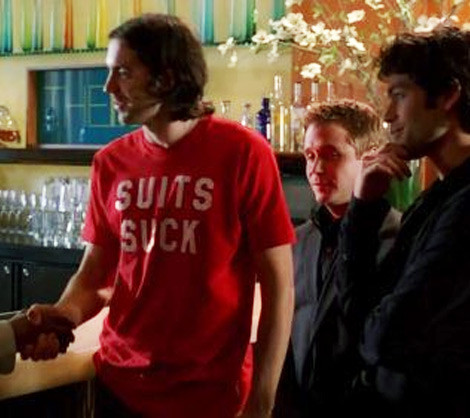 BUY
Suits Suck t-shirt
Description: Medellin director Billy Walsh (Rhys Coiro) wears a red Suits Suck t-shirt in the episode where he and Eric "E" Murphy almost get into a fight after a lunch meeting. Billy wears the tee to the meeting as a direct insult to Eric, Vince's manager. Now you can express your contempt for suits with one of these Suits Suck tees, which are available in a variety of colors, including red, as seen on the TV show. Link to: Suits Suck 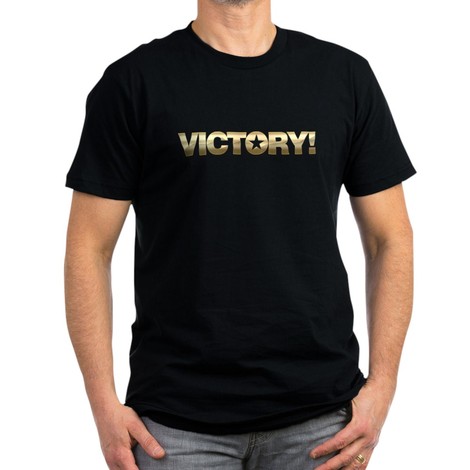 BUY
Johnny Drama Victory t-shirt
Description: Depressed over the negative reviews for his new television series, Five Towns, Johnny Drama (Kevin Dillon) drives to the Grand Canyon where he passes out in his car. The next day Lloyd tells him that Five Towns is a big hit with viewers, despite the critical response. Drama falls to his knees on the edge of the Grand Canyon and says, "Thank you God. Victory!" The Johnny Drama Entourage quote appears on the chest of these Entourage t-shirts. Link to: Johnny Drama Victory 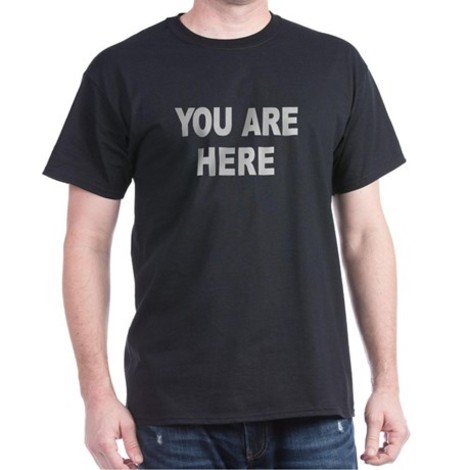 BUY
Entourage You Are Here t-shirt
Description: In Entourage Season 4 production finally begins on Vince and Eric's dream project Medellin. Directed by Billy Walsh, Medellin stars Vincent Chase as the drug lord Pablo Escobar. Under Ari Gold Talent Management, he goes to film the project in the Colombian jungle and can be seen wearing this You Are Here Entourage t-shirt that was made popular years earlier when John Lennon wore the phrase. In addition to being featured on the HBO TV series, it has been worn by numerous other celebrities. Link to: Entourage You Are Here 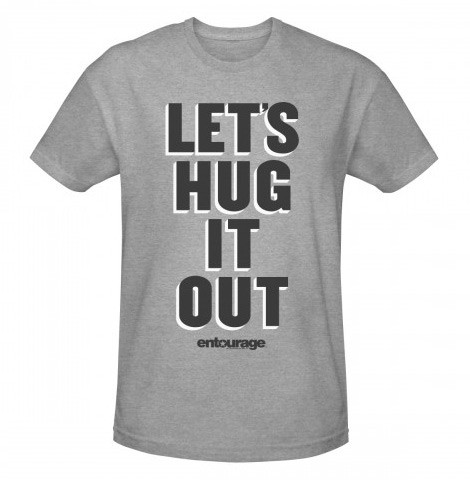 BUY
Let's Hug It Out t-shirt
Description: The front of this Entourage Let's Hug It Out t-shirt features Ari Gold's quote with the TV show logo underneath. If you're in an argument, let the words on this tee help to reconcile the situation. Heed the wisdom of the most cutthroat agent in the business by obeying the advice in the Ari Gold Entourage quote, "Let's hug it out." Similar expressions are available on sweatshirt hoodies. Give this as a gift with an ADHD t-shirt or wear it yourself as a cute tribute to the series. Link to: Let's Hug It Out 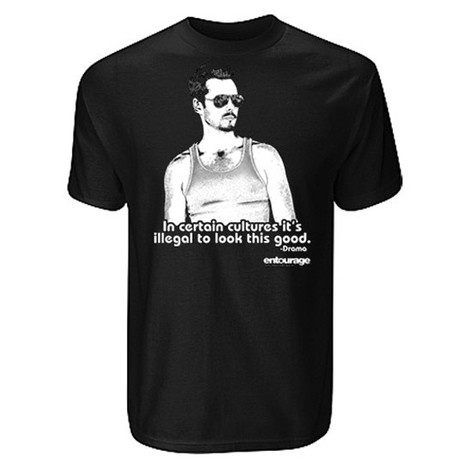 BUY
Johnny Drama t-shirts
Description: Show your support for Vincent Chase's older brother, Johnny "Drama" Chase (Kevin Dillon), who the guys jokingly compare to Patrick Swayze's brother Don, also a struggling sibling actor. The comparisons end after Drama finds success starring on the television series Five Towns. Ari Gold even agrees to be his agent. This Johnny Drama t-shirt displays a silhouette of the star, along with the quote, "In certain cultures it's illegal to look this good." Support the most underrated member of the crew. Link to: Johnny Drama 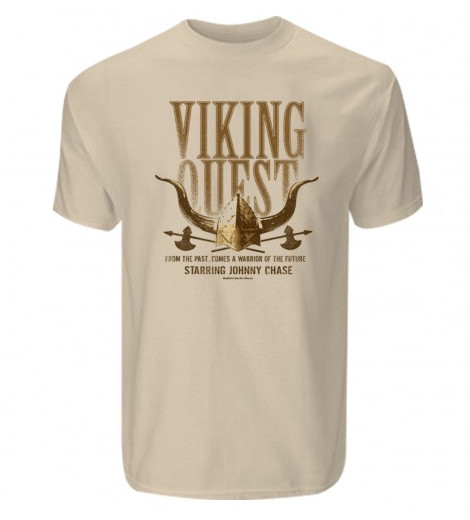 BUY
Viking Quest t-shirt
Description: Johnny Drama often reminds his friends of his role on the fictional sci-fi fantasy series Viking Quest, which aired on the Sci-Fi Channel in 1997. The show's tagline is "From the past... comes a warrior of the future." During the Entourage Season 2 episode "I Love You Too," Drama does a signing at Comicon wearing his Viking Quest warrior costume. These Entourage t-shirts feature the TV show logo. Link to: Viking Quest 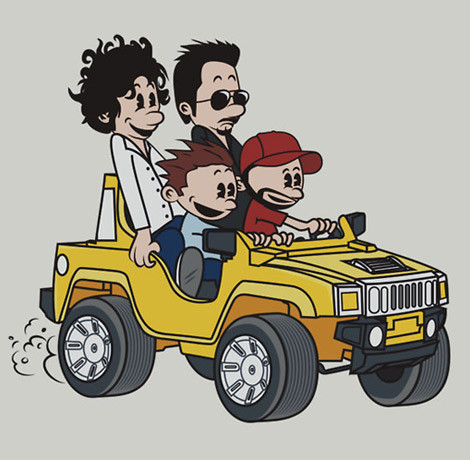 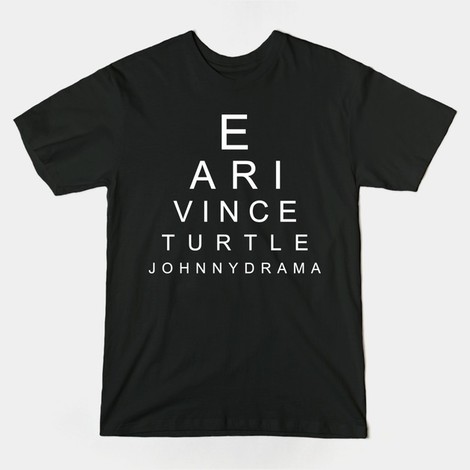 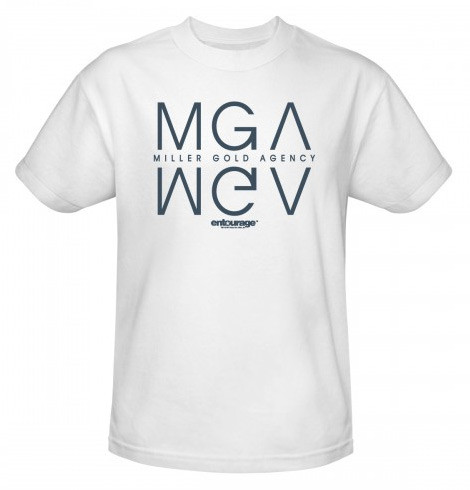 BUY
Miller Gold Agency T-Shirt
Description: Celebrate the Entourage TV series with this cool Miller Gold Agency logo t-shirt. Wear it as you utter Ari Gold's quote, "We're going to hell, so bring your sunblock." It's perfect for fans of Ari Gold (Jeremy Piven), Vince's manager, who often unleashes his frustration on Lloyd or one of the crew, including Eric, Drama or Turtle. These Entourage t-shirts allow you to be part of the Miller Gold Agency. Be sure to pick up a bottle of SPF 1000 sunscreen. It works great in hell. Link to: Miller Gold Agency 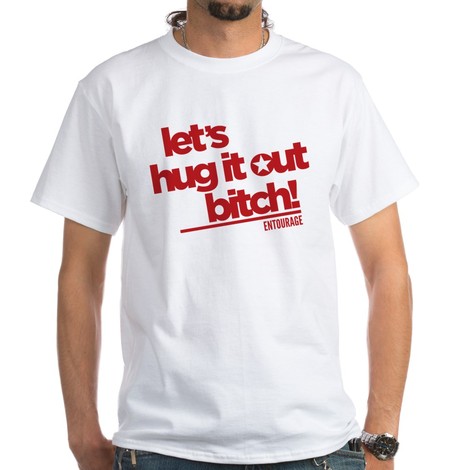 BUY
Entourage Let's Hug It Out t-shirt
Description: This design reminds us that the best way to solve an argument is to hug it out. Wear it to the premiere of Medellin, the fictional bio pic about Pablo Escobar, a ruthless Columbian drug dealer who, in 1989, was ranked as the seventh richest man in the world by Forbes magazine. Vincent Chase stars in the movie as Escobar and Billy Walsh directs. Pair it with a Medellin Entourage t-shirt to celebrate the Pablo Escobar film. The title Medellin refers to the city in Columbia where Escobar was shot dead. Link to: Entourage Let's Hug It Out