In 1990, the movie Home Alone was released and launched Macaulay Culkin into stardom. Soon, everyone was screaming like Kevin McCallister, the young boy who is accidently left home alone at Christmas, yet singlehandedly protects his house from two bumbling burglars known as the Wet Bandits. Two years later, fans were treated to Home Alone 2: Lost in New York where Kevin gallivants around The Plaza and outwits the newly released Harry and Marv. If you want to be a holiday hero, see our gallery of Home Alone t-shirts including the Screaming Macaulay Culkin shirt, Wet Bandits tee and Duncan's Toy Chest t-shirt. Don't miss the Home Alone Talkboy tape recorder, Turtle Dove ornaments and doll.
To buy a T-Shirt, click the image or link for store and size information. 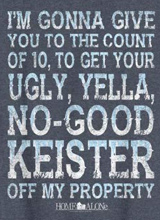 This design features the "count of ten" quote from the first movie. The sequel features the similar quote, "I'm gonna give you to the count of three to get your lousy, lyin' low-down, four-flushin' carcass out my door. 1, 2,... Merry Christmas ya filthy animal." Sound familiar? It should. Those are the lines from the fictional movie, Angels with Filthy Souls, that sent Tim Curry and the hotel staff running for their lives in the sequel. Add this Home Alone t-shirt to your holiday collection. For even more entertainment, be sure to snag a Home Alone video game or Talkgirl tape recorder. Link to: Home Alone Count of 10 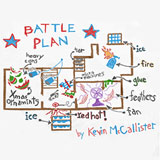 This is the Home Alone battle plan seen in the first film. Kevin designed it to protect the McCallister house and now it can be yours on this Home Alone tee. The drawing depicts the broken Christmas ornaments and tar on the basement stairs that Marv encountered, as well as the hot front door handle and feather room that Harry came across. Reenact the battle plan with the Kevin Home Alone doll. Link to: Home Alone Battle Plan 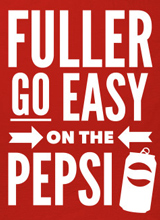 Kevin's cousin, Fuller McCallister (Kieran Culkin), likes to drink soda, so much so that he wets the bed. This Fuller t-shirt displays the warning he gets from his mom. Pair it with two turtle dove ornaments. If you liked the story of keeping one and giving one away to stay friends forever, then pick up a pair for yourself and give one of them to a good friend. The Home Alone turtle doves can be found in the gallery below. Link to: Fuller Go Easy on the Pepsi 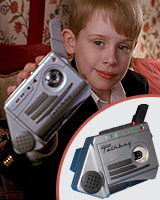 Do you remember Kevin's tape recorder from Home Alone 2: Lost in New York? It was one of the hottest toys following the movie's release and now you have the chance to get your hands on it again. In fact, it was due to a letter-writing effort by fans that brought the movie prop from the big screen to store shelves, where it became a bestseller. Use the collectible Talkboy recorder to tape yourself and your friends. Link to: Home Alone Talkboy and Talkgirl Tape Recorders 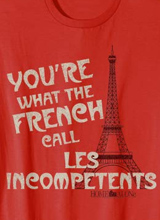 Kevin's older sister Linnie tells him, "You're what the French call Les Incompetents." Pair this humorously insulting design with the Screaming Macaulay Culkin t-shirt. Kevin's screaming face is the first thing you think of when you hear the words "Home Alone movie", but let's not forget the other amazing merchandise that came out of the franchise. This includes hot items like the Home Alone game, Talkboy tape recorder, and Kevin McCallister doll. Any of them can spark a smile. Link to: Home Alone Les Incompetents 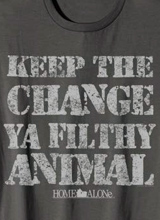 As an eight year old boy left to your own devices, what would you do? Eating junk food and jumping on the bed would probably top the list, but Kevin takes it a step further after the Wet Bandits case his home. He puts firecrackers in a pot and plays a clip from the movie Angels with Filthy Souls, timing it so that the firecrackers mimic a Tommy Gun going off. "I'm gonna give you to the count of ten to get your ugly, yellow, no good keister off my property before I pump your guts full of lead. 1, 2,... 10. Keep the change you filthy animal." Snag this Home Alone shirt featuring the movie quote. Link to: Home Alone Keep the Change 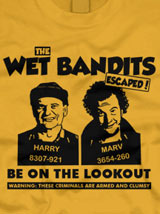 Who stops up people's sinks and leaves the water running to flood the place? The Wet Bandits, that's who. For Harry (Joe Pesci) and Marv (Daniel Stern), holiday spirit is limited to stealing everyone else's goodies. In the first film, their prime target was the McCallister house but Kevin was able to outsmart them and they were arrested. Luckily for the toy store in the second film, he hopped the wrong plane and was in the right place at the right time to stop the escaped duo again. Pair this Wet Bandits t-shirt with the Macaulay Culkin shirt. They'll go great with the Home Alone 2 turtle dove ornaments. Link to: Wet Bandits 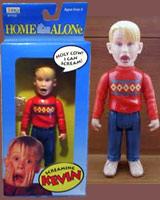 Chat up a storm with this Kevin McCallister Home Alone talking doll that measures approximately seven inches tall. Sounds include Kevin's classic scream that he lets out after applying the aftershave lotion. The figure is made of plastic with moveable arms and legs. Softer non-plastic versions also exist and may or may not be available. These figures are the perfect nostalgic gift for fans of the movie and the character. Link to: Kevin McCallister / Macaulay Culkin Home Alone Dolls 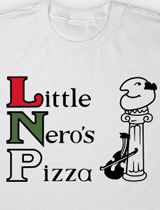 This Home Alone shirt highlights the pizza company that Kevin McCallister and his family order from. Early in the film, cousin Fuller (Kieran Culkin) eats the pizza and overindulges in his carbonated beverage of choice, Pepsi. "Fuller! Go easy on the Pepsi," they warn. Use Kevin McCallister's Home Alone Talkboy recorder to capture your relatives uttering similar quotes about the dangers of too much caffeine. Later, Kevin orders pizza from Little Nero's again. The young man who delivers it gets the surprise of his life when he hears a gangster calling someone a "filthy animal" from inside. Link to: Home Alone Little Nero's 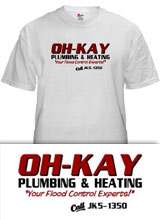 No other means of transportation would have been more suitable for the Wet Bandits than the plumbing van they trolled the neighborhood in. The design on these Home Alone t-shirts features the OH-KAY Plumbing logo that adorned the side of their escape vehicle. Apparently it is supposed to make you feel 'oh-kay' about letting them into your house, but nothing could be further from the truth. If you think this ironic name is just another reason that you can't get enough of this holiday film, then make sure to pick up an OH-KAY Plumbing Wet Bandits shirt or a Battle Plan Home Alone tee today. Link to: OH-KAY Plumbing 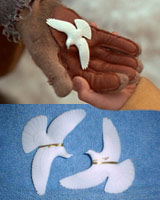 Get your hands on these highly sought after white turtle dove ornaments from Home Alone 2: Lost in New York. Display them both on your own Christmas tree or give one to a friend like Kevin did in the movie to let that person know that they are important to you. The best part about these white doves is that not only do they look identical to the ones from the movie; they also won't leave droppings under your tree. Link to: Home Alone 2 Turtle Dove Ornaments