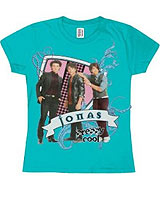 BUY
This blue shirt displays the band name on the front along with an image of the three brothers, whose songs have caused countless numbers of fans to catch their love bug. In July of 2008, the band became the youngest group ever to be featured on the cover of Rolling Stone Magazine. That same year, they opened up for Avril Lavigne's Best Damn Tour, and they also found themselves nominated for a Best New Artist Grammy. Wear this attractive tee under a Jonas Brothers hoodie sweatshirt.