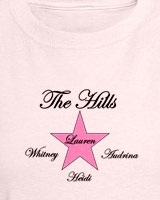 BUY
The design on this Hills tee displays the MTV TV series name above the names of its four most prominent stars. Taking center stage is Lauren, whose name is featured inside a pink star. Lauren came to The Hills after being featured in the MTV reality series Laguna Beach: The Real Orange County. The Hills chronicles her personal and professional lives as she pursues a career in the fashion industry. This MTV Hills t-shirt also includes the names Whitney, Audrina, and Heidi.

In addition to the MTV Hills Cast Walk of Fame tee above, browse the Hills Clothing Gallery for more apparel like men's and women's clothes, kids shirts or hoodies.