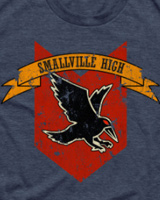 BUY
Even the Man of Steel was a teenager at one point, and this popular TV show focuses on those years. It was a time when Superman was discovering his powers and Lana Lang and Lois Lane were discovering Superman. The series, which began in 2001, has made actors Tom Welling, Kristin Kreuk and Michael Rosenbaum megastars among teens. At left is a Smallville t-shirt that displays a logo for the high school, which is home to the Smallville Crows. It's perfect for any fan of the hit TV series.

In addition to the Smallville Kansas tees above, browse the Superman Clothing Gallery for more apparel like men's and women's clothes, kids shirts or hoodies.