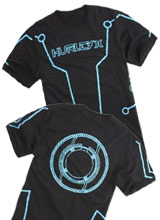 BUY
Despite inheriting his father's fortune, Sam opted to keep a low profile aside from his occasional daredevil stunts. Believing that his dad's vanishing was very peculiar, he was intrigued when he received a call from his father's former arcade. Soon the two were reconnected in a whole new world full of lights and danger. The Tron costume t-shirt shown here was inspired by Sam Flynn's (Garrett Hedlund) attire in the movie Tron Legacy. In the film, we see the family reunite. To mark this occurrence, don't miss the Flynn's Arcade t-shirt below or get a Tron frisbee glow in the dark identity disc for high flying fun.

In addition to the Hurley Tron Costume tee above, browse the Tron Clothing Gallery for more apparel like men's and women's clothes, kids shirts or hoodies.